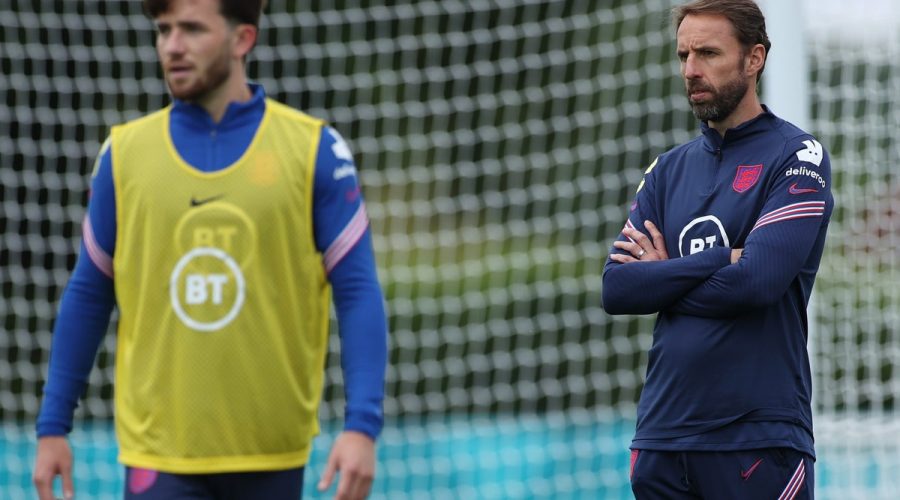 It was just when England finished training on Monday that the mood around the camp changed again. That was when Gareth Southgate and the players were told that Scotland’s Billy Gilmour had tested positive, leading to the precautions taken for Mason Mount and Ben Chilwell. It immediately created a cloud of uncertainty and “unknowns” – right down to whether the players can yet play against the Czech Republic. A decision will be made on the morning of the game.

That is all the more aggravating because Southgate had ensured a sense of clarity after a very different atmosphere of frustration and uncertainty on Friday evening. The England players had been “gloomy” in the immediate aftermath of the Scotland match. By the next morning, though, the group were “still smiling and happy like normal”. One message from Southgate and the staff had its desired effect.

That was that the 0-0 against Scotland wasn’t the “end of the world”, that they still more than had their fate in their hands, and that they just needed to have faith in themselves. It was much the same with the manager himself and his star player. Even the thought that an underperforming Harry Kane might be dropped quickly dissipated. That is one decision there is no doubt over. Southgate is well aware that his captain deserves trust. There is also that little psychological trick of that very trust inspiring a greater loyalty to the manager himself. Kane may feel he has a debt to play.

It was something Southgate had seen work firsthand, with Terry Venables and Alan Shearer as well as Paul Gascoigne.

“The big players have big focus, have a lot more attention and their world is far more complicated than a lot of other players, who can sort of go under that radar of pressure and intensity,” the manager said. “I’ve got a huge understanding of how that is for Harry, a huge understanding of having played with big personalities, big players, how their world is different. Hopefully that helps me to manage him and to get the best out of him, which I think over a long period of time we have done.”

This is another thing that Southgate is more acutely conscious of than maybe anyone else.

The intensive nature of a tournament brings an intensity of focus, ensuring that single matches are built up – and broken down – to have more meaning than any single match can ever have, particularly a group game. The 0-0 with Scotland was undoubtedly an “off day”, but it’s worth putting that in a wider context. How many off-days have some of the greatest domestic champions had? The answer is usually many throughout the season. As an extension of that, you can point to any number of unconvincing games that many tournament winners have been involved in. The sides Southgate has sought to model England on have been as culpable. France drew 0-0 with Denmark in one of the worst games of the 2018 World Cup, much has been made of Portugal’s poor early performances in Euro 2016. There is also a belief the context of the nature of the games has had an influence. The Scottish match is seen as a “unique derby”. Croatia was an opening game against a canny side.

None of this should be to overlook the fine points of this final group game. England have not yet been good in this tournament, and have only been effective in parts. As a consequence of that, one of the favourites – and one of the nine sides to enjoy a home advantage – need to win the game to win the group and stay at Wembley. It feels unnecessarily stark given their ample advantages, not to mention the fact that Croatia are nowhere near what they were and Scotland are a very limited team.

This is also where the question of an “off day” gets a bit more complicated, even beyond the fact the job spec for international managers is to build towards tournaments. Was it just one of those games, or was it another match that showcased how needlessly constrained this team is? The thrilling performances of Italy have certainly changed perceptions about what might be possible with an international team in the modern era.

It is why they bring more acute questions of Southgate himself, and why some of his comments over the weekend raised eyebrows a little. The England manager has diligently done his preparation by deeply analysing what wins tournaments, and has been fairly open in how he has modelled much of the team on Portugal and France.

But this is also the problem when you take that approach. It is somewhat superficial. It is always reactive. You’re never really leading the way, giving opposition new problems to solve. It all becomes… a bit predictable and formulaic. England do practice “automatisms” but they naturally aren’t as dynamic as the finest club sides these attackers play for.

Southgate, for his part, did acknowledge the issues in this specific game. “I think we had a tactical problem to break Scotland down. We couldn’t get the overloads in wide areas as easily as we had done in previous matches and that’s great credit to Scotland. We’ve talked that through with the team.”

He also pointed to the disrupted preparation from the European games.

“We’ve had to change because of the late arrivals and so some of that cohesion as a team takes time and I go back to the fact that you’ve got to praise Scotland for the way they defended.”

Southgate does always talk about these things very well, and can be persuasive, but there’s ultimately nothing as persuasive as performance on the pitch. Talk only goes so far. Roberto Mancini knows this too well. He has no time for such conservatism, or following a trend.

The Italian coach has stood out in this tournament for giving Italy their own style, their own identity, much like a club team. It means more is brought out of the players, rather than a structure imposed on top of them.

England also have better attackers than Italy. A similar approach should be possible. The issue there is that Mancini is a better manager than Southgate, with a far superior record, and much more clout.

It also feels true to say he is less cautious than Southgate. That could be seen in some of the England manager’s comments about that match against Scotland, where he admitted “it was important that we didn’t lose the game in the last 15 minutes”.

He again rationalised this in reasonable fashion on Monday evening.

“If the other night was a one-off game and we needed the points to win a World Cup qualifier or whatever it might be. You’d risk more and you’d take a gamble. But we weren’t in a situation where we needed to gamble. There’s a good chance we might have qualified already because we got that point.”

There is a fair logic to that, but it’s not just about qualification for a team like England. It’s about winning the group to stay at Wembley for the last 16, and that isn’t exactly what that crowd want to see.

This is where we get to the trickiest question of all. Are the Wembley crowd a bit of a problem for England? Might it even be better to play away, if just for one or two games to build momentum before a potential grand homecoming for the semi-finals?

The support don’t exactly make things easier for the home side right now. Three of England’s four halves so far have ended in boos. Some substitutions have been met with disgruntlement, especially when it hasn’t been Jack Grealish brought on.

You can also sense the sudden switch, when they go from supportive to critical. That happened early on in the second half against Scotland.

Southgate was directly asked about this but again rationalised it, denying the crowd were any kind of issue.

“No, I think we’re a professional sports team playing at a high level, we have to expect there’s expectation, we have to expect there are demands on the team. It’s pointless complaining about that, we could be involved in some matches that nobody was bothered about watching and life would be a lot duller. We’re playing for England, we’re at Wembley, we’re in a major tournament and we’ve got to cope with that, we’ve got to produce the football that gives the crowd the excitement they want.”

Except, it isn’t difficult to see a similar situation play out if there’s any kind of wait for goals against Czech Republic. They are likely to make it awkward for England, and of course beat them 2-1 in Prague in October 2019.

“The coach [Jaroslav Silhavy[ has done a fantastic job there,” Southgate said. “They are a very dangerous team and we have concentrated on preparing for that next challenge.”

But there’s still the challenge of the support. An inconvenient truth is that much of the crowd don’t like the football Southgate plays. There isn’t the patience for it, or the culture. There is still a conditioned expectation for something more expansive. It’s also why it’s a particular problem that Mason Mount is out, after interacting with Billy Gilmour. He is England’s most important attacker after Kane because he is the most tactically aware, and knits so much together. His absence could make England even more disconnected than they have been.

It could mean this game brings a few threads of England’s tournament so far to a head. It is consequently almost symbolic that the squad have to endure Covid issues now, because that has obviously been the issue hanging over the entire tournament. Southgate admitted that it has left so many squads “on edge” for the last year.

“We don’t know exactly where everything sits on this one yet. We’ll know more tomorrow or perhaps before tomorrow. Of course it’s not ideal but we’ve always known this could happen and every team has been sort of living with this fear and some have already had to deal with it. We’re the latest to have to have that disruption and we’ve just got to get on and deal with it.”

There were still so many unknowns on Monday night, from the nature of the interaction with Gilmour to the nature of the England team. Southgate needs to change the mood again. There is at least clarity as regards how to do that, though. He needs a win and a statement performance.