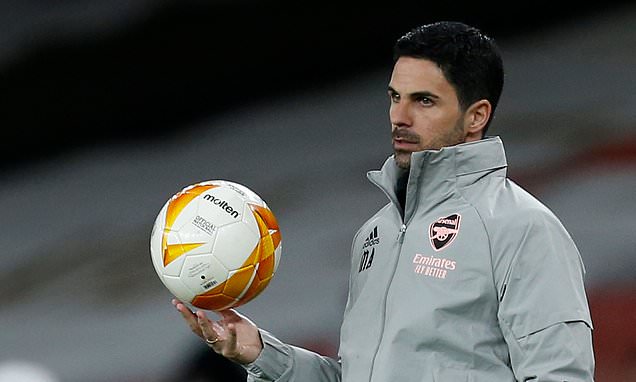 ‘Now we know we have to go there and win the game’: Arsenal boss Mikel Arteta backs his players to finish the job against Slavia Prague and progress in Europa League despite late setback in quarter-final first leg

Mikel Arteta insists he has full belief his Arsenal side will still progress in the Europa League after they conceded a last-gasp equaliser in the first leg of their quarter-final clash with Slavia Prague.

Nicolas Pepe had come off the bench to seemingly win the game for the Gunners with his strike four minutes from time – but the hosts could not hold onto their advantage as Tomas Holes headed in an equaliser to earn Slavia a 1-1 draw.

The first leg at the Emirates Stadium had looked set to end in a goalless stalemate as Arsenal passed up a number of fine chances. 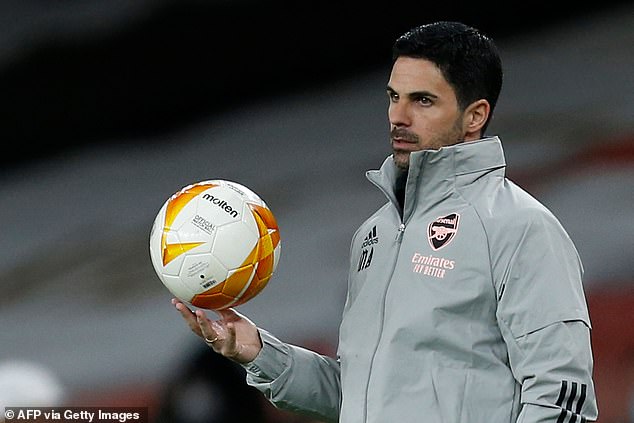 But club-record signing Pepe would score with a deft chip with just four minutes remaining to open the scoring, only for Holes to level deep into stoppage time.

Now Arsenal will need to score at least once in Prague next week if they are to advance into the last four – but Arteta has no doubt his team are capable of winning in the Czech capital.

‘I totally believe that we can go there and win the match, if not I wouldn’t be sitting here,’ he said.

‘The mindset has to be to go there and score goals and win the game because we have to score if we want to go through. 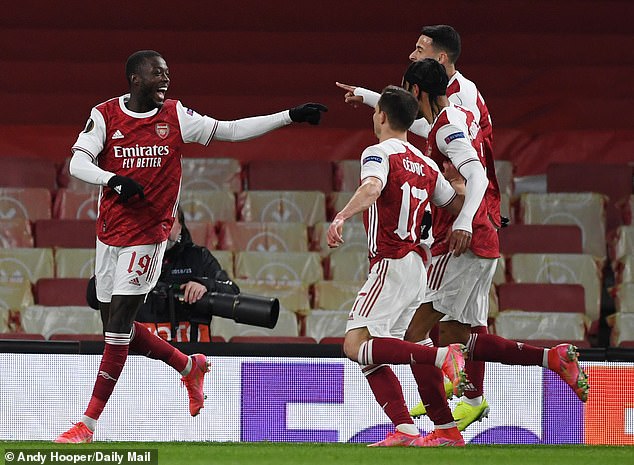 Arteta opted to drop captain Pierre-Emerick Aubameyang to the bench for the game, which saw both Willan and Alexandre Lacazette hit the woodwork as the hosts missed a number of clear-cut chances.

Slavia, who have seen off Leicester and Rangers in previous rounds, had a couple of good opportunities of their own and would ultimately grab what could prove to be a crucial away goal as Holes arrived at the back post to leave Arteta crestfallen on the touchline.

‘When you create big chances in Europe you really have to put them away,’ added the Spaniard. 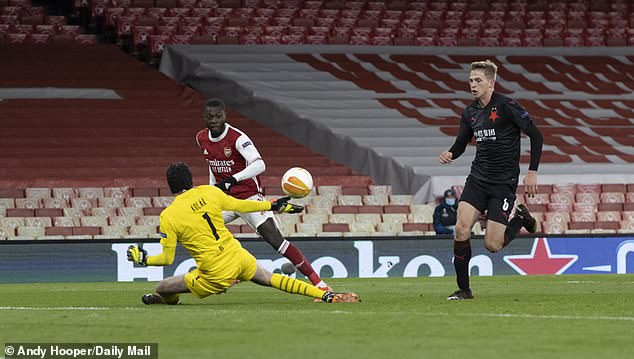 ‘I think we made much more than the result that we got but we made it the most difficult thing was to score the first goal and then in the last four or five minutes to manage the game much better than we did.

‘It puts the tie in a much more different position and looking back to what happened on the pitch it is not what we expected.’

Arteta opted to name Aubameyang among his replacements but his skipper would come on to set up Pepe’s strike.

‘Well, I cannot talk with everybody individually every week,’ Arteta replied when asked how Aubameyang reacted to being dropped.

‘We try to be transparent and communicate with the players as transparent as possible, for them to understand the role of the game that they have. When he came on he showed the right attitude.

‘There were some big decisions to leave some players out but we decided to play the team who had the best chance to start the game and as well have some key players to change the game when we need it. 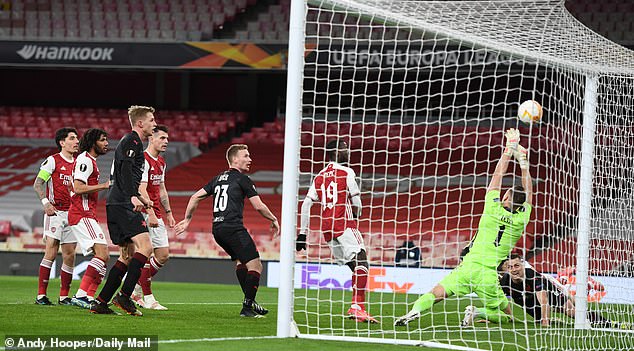 ‘When they came on they had an impact which is very necessary in this competition and they did what we expect them to do.’

The late header from Holes had the whole of the Slavia team, as well as their bench, celebrating ferociously.

Lukas Provod, whose late shot was pushed onto the post by Bernd Leno to give Slavia the corner from which Holes scored, explained the passion behind the reaction.

‘We celebrated our equaliser emphatically because we played against a very hard opponent with great players,’ he said.

‘But we put everything into it and got our reward at the very end. After conceding first, nothing changed for us because we still wanted to score an away goal that is very precious. We will see how valuable it is in the second leg.’