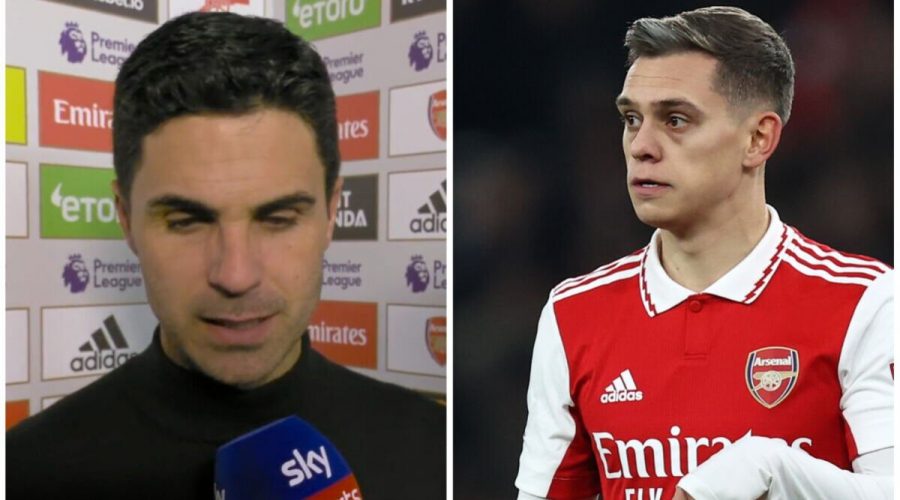 Arsenal head coach Mikel Arteta heaped praise on Leandro Trossard for his debut cameo from the bench after watching his side secure a dramatic 3-2 victory over Manchester United. The Belgian was named on the bench for the game after making his £26million move from Brighton earlier this week but made a late impact with an impressive cameo as the Gunners snatched victory.

Trossard was only given a brief time to shine on the pitch after replacing Gabriel Martinelli on 81 minutes with the score level at 2-2 and on a knife edge. Marcus Rashford had opened the scoring with a thunderous effort before Eddie Nketiah and Bukayo Saka turned the game on its head.

Lisandro Martinez’s header brought United back level before Arteta turned to his bench. And the Belgian showed exactly why Arteta was desperate to bring him in so quickly for this game by making an immediate impression.

Arsenal raced against the 12pm deadline on Friday to sort the paperwork in time for Trossard to be registered for the clash and they managed to arrange the deal with Brighton in enough time. And it proved to be a blessing for the Gunners as Trossard got straight to work by impacting the game.

He looked sharp on the left hand side and in the No 10 role as he carried the ball forward, and had a part to play in the winning goal too. His pass out wide led to the cutback to Martin Odegaard, who crossed for Eddie Nketiah to stab home with an improvised finish.

Arteta gave no explanation for why he chose not to start Trossard, but the 40-year-old was pleased with his contribution after coming off the bench to help his new team to victory, having been part of the squad for only three days.

When asked about the importance of new signings, he told Sky Sports: “Just in terms of numbers we had 15 or 16 outfield players [before] and it wasn’t enough. They are going to help us. You saw Trossard, composed and confidence already.”

Arteta was understandably delighted after watching his Arsenal side reached 50 points after 19 games played, their best-ever start to the season – just 16 months after overseeing their worst beginning to a campaign.

And the Spaniard lauded their performance after restoring their five-point lead at the top of the table.

“It doesn’t get much better than that. The second half especially, the performance was incredible,” he added.

“We were composed and determined at the same time. We never panicked. We always believed that we could win it. We showed the right composure in the box a lot of times but the ball didn’t go in. Thankfully at the end it did.”