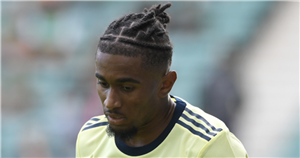 Arsenal youngster Reiss Nelson has been linked with a move away from the Emirates this summer after failing to make an impact under Mikel Arteta – and he could be on his way to Brighton.

The 21-year-old was handed a chance to impress following the arrival of Arteta, but has only managed four goals and four assists across 47 first-team appearances.

With his current contract running until 2023 but getting regular minutes unlikely, a loan to another Premier League side could be just what he needs to reach the next level.

In what could be a hint at where he might end up, Nelson liked an Instagram post from a Brighton fan page that suggested he could be on his way to play under Graham Potter.

Although it might well have been an accidentally like, a loan away from the Emirates remains possible as Arteta looks to boost his squad with more incoming deals.

Up to now, the best period of Nelson's career came during his loan spell with Hoffenheim, during which he made 29 appearances in all competitions and scored seven goals.

Will Reiss Nelson benefit from leaving Arsenal on loan this season? Give us your thoughts in the comments section

The Spaniard said of the forward in May: "With Reiss I would like to give him more.

"He's a boy who trains really hard, he wants to do extra all the time but it's very difficult at the moment with the players that we have to fit him.

"I feel sorry that we don't have other competitions to use him because he deserves more. If he doesn't play more it's my fault."

Having lost to Hibs and drawn to Rangers so far in preseason, Arteta has told supporters that new faces would be arriving before their next fixture.

“Now a little bit of recovery. We trained really hard, played two games, and now we’re going to be travelling to America in the next week,” Arteta said on Saturday.

“We didn’t have any injuries which is really positive in the first week. We’re going to have some new faces arriving probably, so very positive.”

The Spaniard could well be referring to Albert Sambi Lokonga and Ben White, who could be seen as replacements for the departed David Luiz and Serie A bound Granit Xhaka next week.