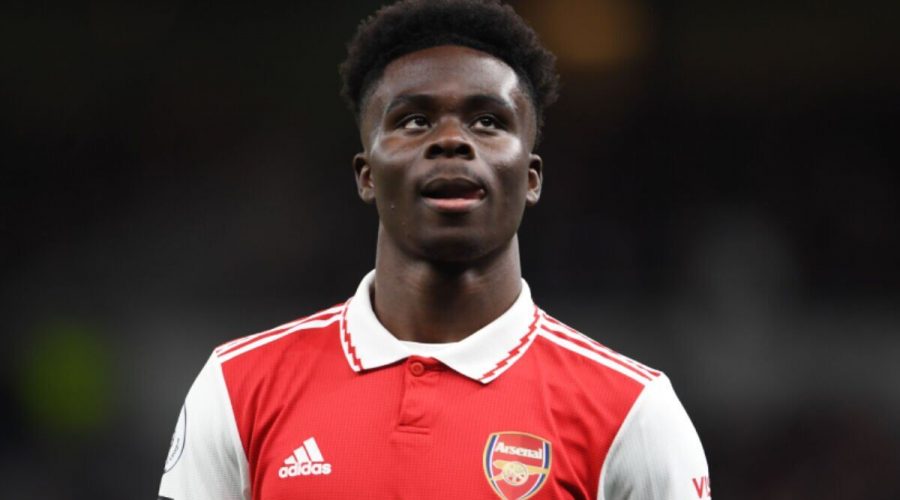 Manchester United icon Roy Keane has warned Arsenal that their star man Bukayo Saka could play for several top clubs across Europe, as the Gunners have struggled to tie the forward down to a long-term contract. The England man, alongside William Saliba and Gabriel Martinelli, have 18 months left on their current contracts at the Emirates.

Negotiations are ongoing with the trio as Saka and Saliba had options triggered in their deals to extend for a further year, taking them to 2024, while Martinelli has a further two-year option to extend in his deal but the club are hoping to secure long-term contracts for their stars. Saka has been a mainstay on the right flank and played a key role in Arsenal topping the Premier League table, but there have been rumours linking him with a move away from north London.

Pep Guardiola’s Manchester City have been linked with a blockbuster move for the England star, though they may be able to seal a bargain deal if a new contract cannot be agreed upon. Liverpool had also been mentioned with an interest in Saka, but are likely to turn their attention towards midfield options in the summer.

Keane previewed United’s trip to Arsenal on Sunday, and praised Saka but warned the Gunners that he can play for any team across Europe, including the likes of Real Madrid. “For such a young player he has got a lot of experience, he’s already got his hands on a trophy with Arsenal, the FA Cup,” Keane told Sky Sports.

“He has had a big disappointment with England in terms of missing the penalty and he got a lot of criticism from that, but he has bounced back well which is a good sign to him. The key is for the player himself, he looks like he goes out and enjoys the game.

“He seems a really nice lad away from the game, which obviously helps, but when he is playing he can beat a man. When you are playing for the big clubs you need one or two players in your team that can beat a man.

“That changes the picture, it gives you a much better chance of winning football matches. He’s obviously got a lot more consistent, I like everything about him. I think any of the big clubs in Europe, he would play for them, I am including the Real Madrids I think he is that good, I think he is fantastic and will only get better.”

In August, Arsenal boss Mikel Arteta felt confident that a new deal for Saka would be thrashed out. “I am very confident that we as a club and Bukayo, his family, his agent, everybody, we are very much aligned in what we want to achieve,” the Spaniard said. “And now it is about putting it on a piece of paper.

“I would like that to get done, because I don’t want the player or anybody distracted while we are in the middle of the season. But those things take time and they have to go through the right process, and I think the process has been really good.”

January 23, 2023 Soccer Comments Off on Arsenal warned by Roy Keane that Saka ‘would play’ for several clubs
NFL News