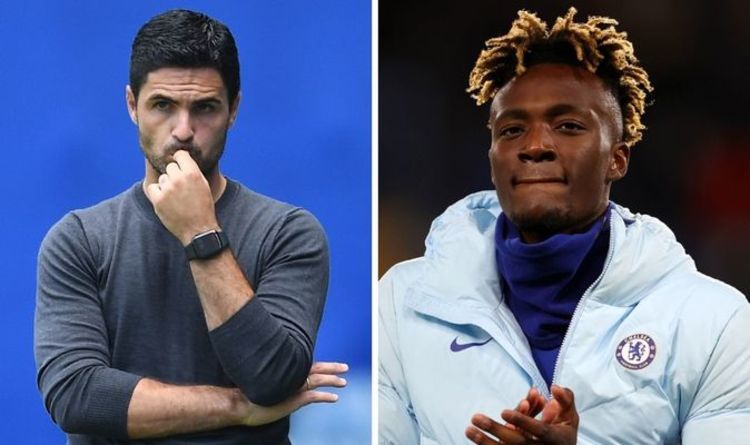 Chelsea: Tuchel explains why Abraham was not in squad

Arsenal have reportedly expressed an interest in signing Tammy Abraham from Chelsea with details on discussions emerging. The Gunners have been busy in the early weeks of the summer transfer window, announcing two deals with Ben White set to join in the near future.

Nuno Tavares and Albert Sambi Lokonga have both joined with just over £20million spent and White’s imminent arrival will take that spending to £70m.

But more signings are expected before the start of the season with Mikel Arteta keen to sort out the goalkeeping department.

Arsenal were reportedly keen to bring Mat Ryan back as the No 2 option to Bernd Leno, but he’s now agreed to join Real Sociedad.

Signing another forward is also seen as a top priority to help ease the burden on Pierre-Emerick Aubameyang.

Alexandre Lacazette’s future is also uncertain as he has just one year remaining on his contract.

The Frenchman was the main choice to play through the middle last season with Aubameyang often deployed out wide.

And it appears as though Arsenal have identified Chelsea’s Abraham as a possible target this summer.

According to transfer expert Fabrizio Romano, Chelsea are “aware” of Arsenal’s interest, although no official approach has been made.

Talks are also not at an “advanced” stage, suggesting Arsenal are still pondering whether to make a move or not.

Abraham fell out of favour at Chelsea once Thomas Tuchel took over from Frank Lampard in January.

The 23-year-old was a regular under Lampard and was Chelsea’s leading Premier League scorer up until Lampard’s dismissal.

But Abraham struggled for minutes once Tuchel took charge, featuring in just eight Premier League games in the second half of the season.

He wasn’t even named in the matchday squad for the Champions League final victory over Manchester City at the end of May.

Now it seems as though Chelsea are ready to sell the striker this summer, with an asking price of £40m mooted.

Chelsea are yet to make any moves in the transfer market this summer, but have already recouped little over £30m in outgoings with Fikayo Tomori, Victor Moses and Olivier Giroud all sealing permanent moves away from the club.

Signing a new out-and-out striker is seen as imperative for Tuchel, with the likes of Harry Kane, Romelu Lukaku and Erling Haaland strongly linked.