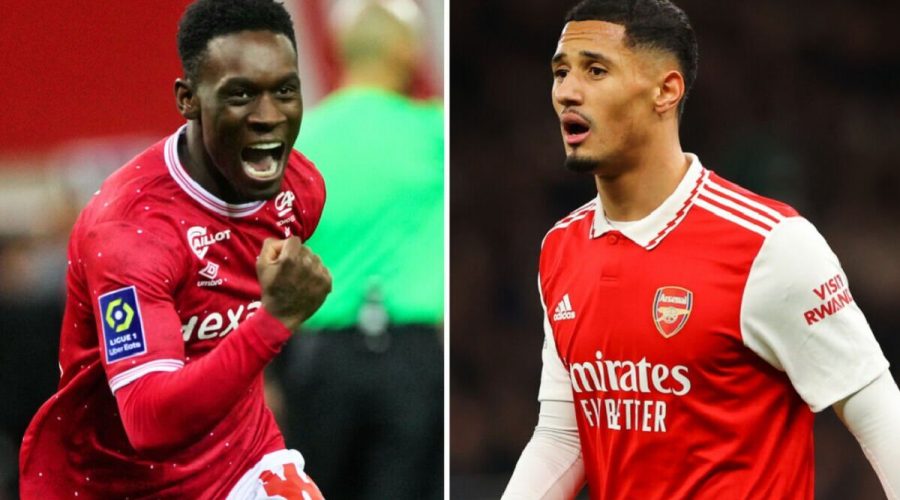 Arsenal have been told they might have another William Saliba on their hands in Folarin Balogun. The striker, still only 21, is thriving in Ligue 1 and has scored 10 goals in 18 games on loan at Reims.

Such is England under-21 international Balogun’s form in France that there had been calls for Arsenal to recall their academy graduate. But the Gunners will not bring the young centre-forward back, instead allowing him a full season of regular minutes.

And ex-Arsenal and England forward Karen Carney has suggested Balogun can follow in the footsteps of Saliba. The young French centre-back joined the north London club for £27million but then spent three seasons out on loan at Saint-Etienne, Nice and Marseille.

Arsenal boss Mikel Arteta faced frequent criticism for loaning Saliba out but the 21-year-old has been integrated into the team expertly this season. He has started all 18 Premier League games and helped them to concede just 14 times, less than only Newcastle.

Carney has suggested the Spanish tactician might have similar plans with New York-born Balogun, who was highly rated when scoring goals aplenty coming through the club’s youth system. She told the Kelly and Wrighty Show: “I wonder if they’re doing the same with Balogun as well, he’s gone out on loan.

“We’re looking for this potential another addition to come in. We had him, saw him, sent him out on loan, similar to Saliba and he’s a talent, I really like him.

“So, if he goes and then comes back, it’s like another new signing that fits into the culture and the mould again.”

Ex-Arsenal striker Wright added: “Could you imagine how Balogun feels? He is out there thinking ‘I have got to get myself back to that place’, so hopefully he will be playing better.

“At the moment, everything is moving smoothly (for Arsenal in the Premier League).” Arteta declared last March when Balogun was on loan at Middlesbrough in the Championship that he sees the player having a long-term role under him.

Arteta said: “You can see how he is developing. This is going to give us more detail about what is the next best move for him to keep developing, because he has developed and we want him to be part of our future.

“He needed a pathway, he needs that exposure. He needs to go through good and difficult moments, and he needs to be able to adapt and find himself in the dressing room, and develop the importance that is required to play at this level. I think he is doing all of that really well.”

Time will tell if Balogun returns to Arsenal ready to impact the team as significantly as Saliba has done. But he has just two years left on his contract when he returns and will be eager to prove he can make the grade under Arteta.

January 18, 2023 Soccer Comments Off on Arsenal told they’ve got their next William Saliba in Folarin Balogun
NFL News