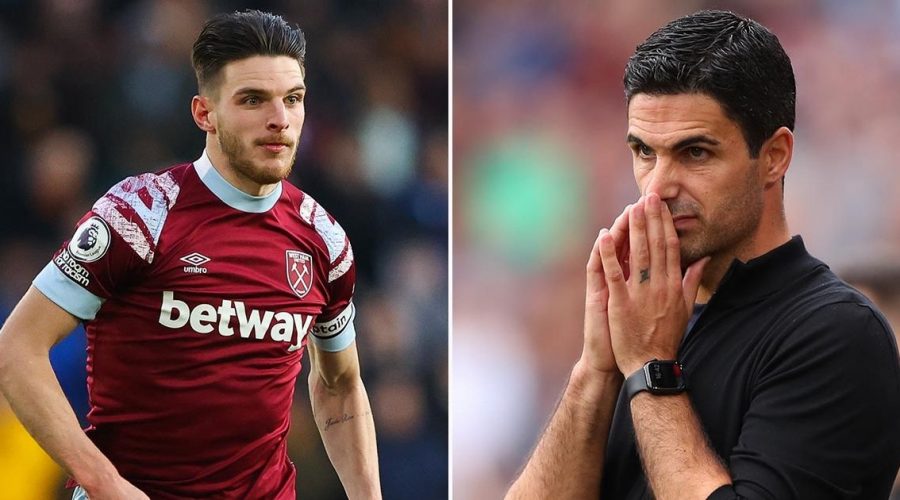 Arsenal have decided to gamble and save up the money to buy Declan Rice in the summer, rather than spending big on players this month to boost their title push.

The Gunners are currently eight points clear at the top of the Premier League, a competition they haven't won since 2004, but have opted against spending for the sake of it over the coming weeks despite a glaring lack of depth in the squad.

Mikel Arteta has made it clear that unless the club can find a player of the right age who fit the mould immediately, he would rather go without bring anyone in this month.

After being gazumped by Chelsea in the race for Mykhailo Mudryk, the club have turned their attention to Rice, and fancy their chances of pipping their London rivals to his signature at the end of the season.

Rice, who spent years in Chelsea's academy, has been heavily linked with a return to Stamford Bridge over the past few years, but with the Blues looking unlikely to qualify for the Champions League, Arsenal feel they'll have the upper hand in prospective negotiations.

The West Ham midfielder has been in decent form over the past few months, though has cut a dejected figure all season due to the club's torrid recent form.

ARSENAL FANS – Would you rather the club spend big in January or save money for Rice? Let us know in the comments section below.

With their win in the north London derby at the weekend as well as Manchester City's defeat in the Manchester derby, the wind appears to be firmly in Arsenal's sails.

Up next is for the Gunners is Manchester United at the Emirates, with an FA Cup fourth round clash with City a few days later.

January 18, 2023 Soccer Comments Off on Arsenal to ‘risk cheap January and save for Declan Rice’ despite title charge
NFL News