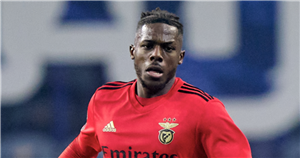 Arsenal could well be one of the busiest Premier League clubs in the summer transfer window following the conclusion of Euro 2020 after missing out on European qualification.

While Mikel Arteta has admitted that he needs to improve in his own work, he wants to see several improvements made to his playing squad ahead of the new season.

The Spaniard, who won the FA Cup during his first season as boss at the Emirates, watched his side slip down the table towards the end of the season before winning their final five fixtures.

That form, combined with the owners plans to get supporters back onside this summer, has seen them linked to several stars – the latest detailed by Daily Star Sport below.

Fabrizio Romano reported on Wednesday that Nuno Tavares to Arsenal is a 'done deal' with paperwork due to be signed later in the day with the Benfica board.

He reports that the youngster will cost around £7m plus add ons, with interest initially beginning over a potential swap deal with Matteo Guendouzi, who wants to join Marseille.

Tavares, 21, has made 25 Primeira Liga appearances at left-back for the Portuguese giants, and could play a back-up role for Kieran Tierney at the Emirates.

Arsenal have been handed a boost in their rumoured interest in Rennes midfielder Eduardo Camavinga, with the club failing to agree over a new contract as he enters the final year of his current deal.

Rennes technical director Florian Maurice has said of the 18-year-old: "For the moment, we don’t have an agreement on one side or the other. For the moment, Eduardo is here

"There are discussions that exist between the clubs, with the player as well. We still haven’t found a solution. Either we find a way to extend his contract or a club is interested in Eduardo and we’ll reflect on the proposal we’re given."

Will Arsenal challenge for Champions League qualification next season? Give us your thoughts in the comments.

According to reports in Germany, Arsenal are keen on signing RB Leipzig and Austria star Marcel Sabitzer this summer, joining AC Milan and Roma in the race for a deal.

The 27-year-old has entered the last year of his contract in the Bundesliga, and hinted last year that we would target a move to the Premier League down the line.

He said: "I'm doing very well financially here, too. It's not my motivation to move there and build a money bin. I like playing for RB.

"But I have played in England a couple of times, with the national team as well, and the atmosphere inspired me. The way the fans read the game and cheer shows that they understand football.

"A tackle is sometimes cheered, as is a diagonal ball.

"I like watching the Premier League, and I can imagine that it's fun to play there."