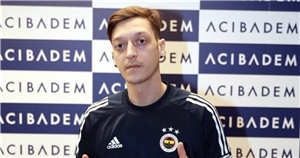 Arsenal are reportedly still paying Mesut Ozil '90 per cent' of his £350,000-a-week salary despite the German playing for Fenerbahce.

According to The Athletic, Arsenal are still paying the majority of Ozil's salary until June, the date his contract was due to expire.

The German left Arsenal for Turkey in January to little fanfare after he mutually agreed to have his contract terminated six months prematurely.

Ozil had been frozen out the side by Mikel Arteta: to the extent of not being registered for either the Premier League or the Europa League this season.

And after failing to make an appearance at the Emirates this season, the former Real Madrid midfielder left after almost eight years in the capital.

When Ozil made his debut for Fenerbahce – his boyhood club – against Hatayspor in February, it was his first taste of competitive football in seven months.

Last month the club revealed they had registered a £47.8 million loss after publishing their accounts for the 2019/20 season.

In that period, the majority of players had taken a pay cut, and the club's mascot – Gunnersaurus – had to been let go in an attempt to balance the books.

All of this whilst Ozil took home £350,000-a-week, a hefty sum of which Arsenal are still paying the majority.

Arsenal handed Ozil his new contract in 2018 when he became Arsenal's highest-paid player ever.

Arsenal will be free of his wages in the summer, in time for Arteta's rebuilding plans; according to The Athletic, the number 10 spot appears to be central to the rebuild.

The Athletic's report also claims that David Luiz will leave in the summer, alongside Lucas Torreira and Matteo Guendouzi – who are both currently on loan.

And there is currently uncertainty about the futures of Hector Bellerin and Reiss Nelson.