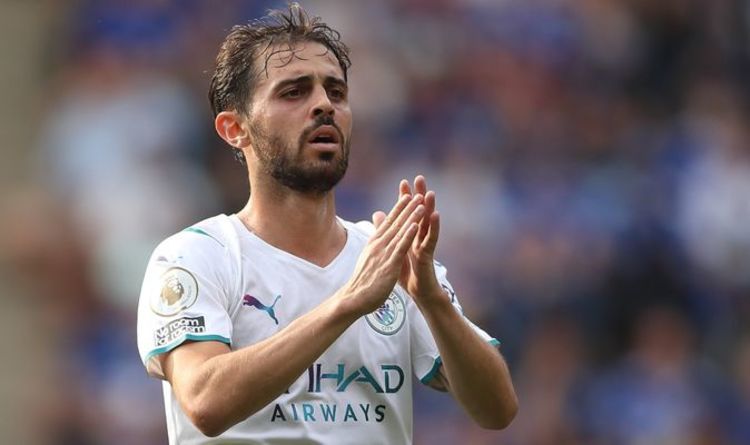 Manchester City forward Bernardo Silva is hoping to leave the club and return to mainland Europe if the opportunity presents itself, according to reports. The 27-year-old, who was linked with a summer move to Arsenal, was keen to seek a new challenge during pre-season but ultimately remained at the Etihad Stadium.

Silva remains a key player for City and was influential in helping the Premier League champions to seal a hard-fought victory over Leicester City on Saturday afternoon.

He scored the only goal of the game shortly after the hour mark to hand Pep Guardiola’s side all three points at the King Power Stadium.

The Portuguese forward has played in every league game for City since their opening-day defeat at the hands of Tottenham and looks set to play a big role for the club once again this season.

However, it seems as though he will be looking to move on in the near future as he continues to weigh up a change of scenery.

He was heavily linked with Arsenal before last month’s transfer deadline, with the Gunners in desperate need of a new creative midfielder at the time.

In spite of their interest, the north London club ended up signing Martin Odegaard from Real Madrid after his successful loan spell at the Emirates Stadium last season.

It remains to be seen whether Arsenal will retain their desire to land Silva into the January window and beyond, but they could be denied by the player himself if a move is eventually made.

Silva does not feel at home in Manchester and would prefer a return to Europe, according to Eurosport.

He previously turned out for Benfica and Monaco prior to joining City and a move back to the mainland would put him closer to his family and friends in Portugal.

The report claims that City are still uncertain over Silva’s future but have already identified Real Sociedad winger Mikel Oyarzabal as a potential alternative.

Guardiola admitted that Silva was eager to leave the club at the beginning of last month but insisted that he would only be sold if a replacement could be found.

“Not just Bernardo, there are two or three players that want to leave,” the City boss told reporters.

“But they are our players, and when they bring some offer and they want to leave we are open to discuss, but it depends on them.

“Otherwise, they will continue training really well, they will stay here and I will decide if they stay or don’t stay.

“The players who want to leave know the door is open, because we don’t want anyone here unsatisfied, but they have to bring someone.”

Meanwhile, it seems unlikely that Arsenal would stand any chance of sealing a move for Silva as a result of his preference for a return to continental Europe.

The Gunners were the Premier League’s biggest spenders over the summer, splashing in excess of £150million on new players.

However, they have struggled to pick up their form in spite of Mikel Arteta’s expensive recruitment drive, winning just twice in all competitions since the beginning of the campaign.