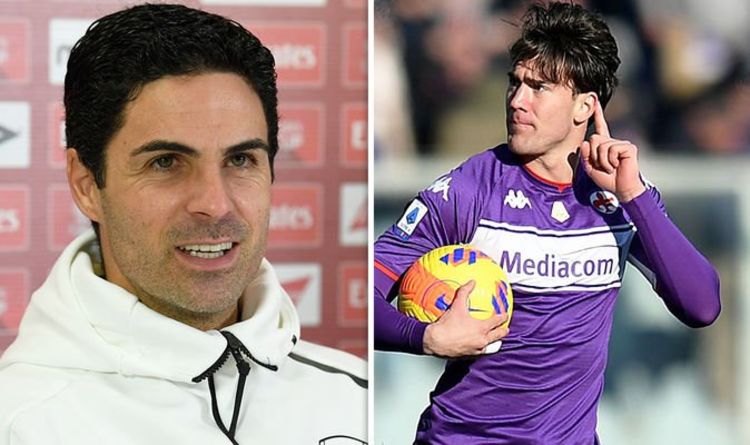 Arsenal have been given a triple boost in their hopes of signing Dusan Vlahovic this month, according to reports in Italy. Arsenal are hopeful of signing the Fiorentina striker in this window rather than the summer. Vlahovic has been linked with a host of top clubs across Europe following his sensational goalscoring form in 2021.

Juventus, Tottenham and Barcelona have all been linked with the 21-year-old frontman.

But perhaps Arsenal’s need for a new striker is even greater than the other clubs interested.

Alexandre Lacazette and Eddie Nketiah are out of contract in the summer, whereas Pierre-Emerick Aubameyang has been told he can leave at the right price.

JUST IN: Steven Gerrard tipped to sign Coutinho a partner in crime in incredible reunion

Italian outlet Gazzetta dello Sport claimed last week that the Gunners had made an offer of £46million plus Lucas Torreira for Vlahovic.

At that time, Fiorentina were not keen on selling the player in this window despite him having just 18 months remaining on his contract.

But CalcioMercato now claims Fiorentina are open to letting him leave ‘immediately’ to an interested party.

And in another boost to Arsenal, Juve have all but been ruled out of the running for this window.

The Serie A giants would not be able to afford Vlahovic until the summer, meaning Arsenal could attempt to beat them to the deal six months earlier.

And in a further positive development, CalcioMercato says Fiorentina have also identified the player they want to replace Vlahovic.

But the Florence club instead view Julian Alvarez as the replacement for Vlahovic.

River Plate striker Alvarez has been linked with Manchester United, as well as other top sides in Italy

The 21-year-old has scored 18 goals and registered six assists in just 21 league appearances for River this season.

Speaking at his press conference last Friday, Arsenal boss Mikel Arteta admitted he would not be averse to spending this month if the right opportunity arises.

“We have to maximise every window in many different ways and we are alert,” Arteta said.

“If it is the right player and we can afford it and we can do what we want to do we will discuss it and make the best possible decision. We are open.”