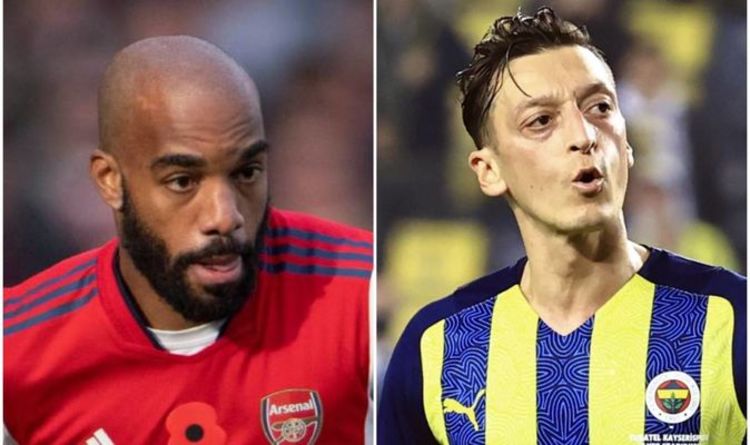 Arsenal are reluctant to offer Alexandre Lacazette a new long-term contract due to their previous experience with Mesut Ozil. Lacazette is out of contract at the end of the season and his future is still up in the air as the January transfer window approaches.

The 30-year-old has contributed three goals and one assist in nine games so far this season for Mikel Arteta’s side.

Arsenal are facing plenty of uncertainty up front in the coming months, with both Lacazette and Eddie Nketiah out of contract on July 1.

The duo will be free to discuss free transfers with other clubs from January, meaning the next few months could be key for Arteta.

Arteta has made it clear publicly that he wants 22-year-old Nketiah to sign a new deal, but Lacazette’s situation is more complicated, due in part to his age.

Lazacette has been a reliable goal scorer for Arsenal over the past four seasons, passing the 10-goal mark in every Premier League campaign – a record only Pierre-Emerick Aubameyang, Harry Kane, Mohamed Salah, Son Heung-min, Raheem Sterling, Jamie Vardy and Chris Wood can match.

But, according to The Athletic, Arsenal are wary of offering Lacazette a long-term contract because they are concerned about the ‘domino effect’ it could cause.

The Gunners spent the summer refreshing their squad, spending around £140m on six new signings, and don’t want to hinder the development of their younger players, or ability to sign a new, younger striker.

Jamie Carragher admits he was wrong about Arsenal signing Ramsdale

Arsenal won’t rule out a short-term extension for Lacazette, who has impressed Arteta with his attitude, but the Ozil situation is still fresh in their minds.

It proved to be a disastrous decision, with the German midfielder’s form plummeting under Unai Emery and Arteta before the club managed to offload him to Fenerbahce in January.

Arteta would therefore like to keep Lacazette at the club, but on his terms, rather than the Frenchman’s, which is a stance he hinted at last month.

“Anything is possible,” he replied when asked about Lacazette’s future in his press conference ahead of the 3-1 win over Aston Villa on October 22.

“It’s the situation that we have and we have to accept it. I cannot ask anything from the player with the way he’s dealing with that situation.

“It’s not an individual situation, it’s a situation that has a knock on effect on others that we have to deal with in the past as well and still now to see what the best option is going to be for everybody this season.

“With a player sometimes the motivation can be just his financial future. It’s not the case with Laca. He showed that since I’ve been here every single day and that’s why he’s a really important player for this team.”