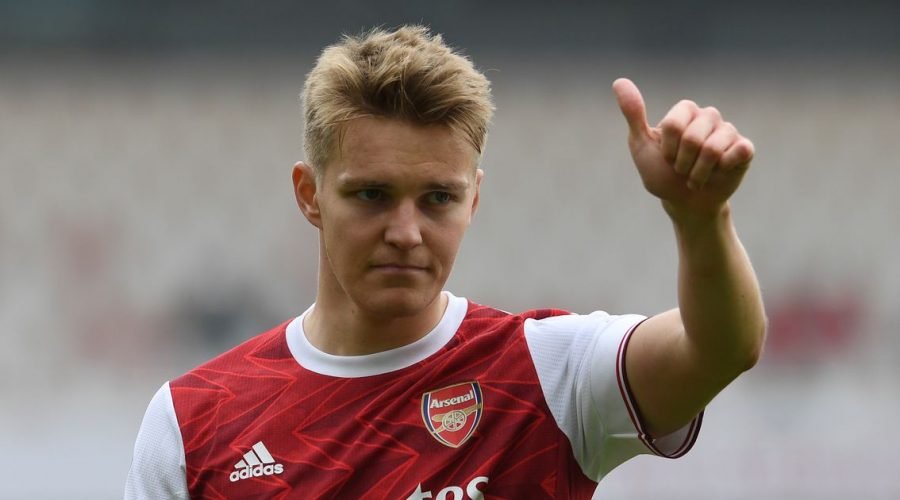 Arsenal remain hopeful that Martin Odegaard will return to the Emirates next season – and some Gunners fans believe the Norwegian has given a subtle hint over his transfer future.

The playmaker enjoyed a successful six-month loan spell in north London in the second half of last season, after finding minutes hard to come by at parent club Real Madrid.

Odegaard struggled to break into Zinedine Zidane’s plans, making just seven appearances in La Liga, only three of them starts, and was eventually shipped out on loan to Arsenal on transfer deadline day in January.

The Gunners are keen to retain his services but with Zidane quitting the Spanish club, who have since lured Carlo Ancelotti back to the Bernabeu, Odegaard now faces an uncertain future.

However Arsenal fans are optimistic that Odegaard will wear their famous red and white colours again next season – and believe his Instagram account suggests he has his heart set on an Emirates return.

One fan in particular has noticed that Odegaard's Instagram profile picture remains an Arsenal shirt, while he has yet to post a farewell statement on social media.

The eagle-eyed supporter went on to claim that he could have changed the picture to Real Madrid or Norway, while also noticing that the midfielder has been active on social media.

It remains to be seen whether the theory proves to be correct, but Arsenal are certainly keen on landing the Norwegian following his impressive loan stint.

Should Arsenal re-sign Martin Odegaard for next season? Let us know in the comments.

His performances appeared to produce the solution to the problem position of central attacking midfield in Arteta’s team.

The Spaniard has been keen to bring Odegaard back to the Emirates Stadium on a permanent basis.

“We have a very clear and strong opinion on what we would like to do,” said Arteta when asked about keeping Odegaard.

“He’s not our player. We will have discussions in the next few weeks. And respect first of all because he’s a Real Madrid player, and we will have those communications.

“We’ve tried to make everything that we could to get Martin performing for the team, which I think he’s done.

“And he’s adapted really well to our way of playing and to our football club. And hopefully we have given him as well the hope and the feeling that it could be a good place for him.”