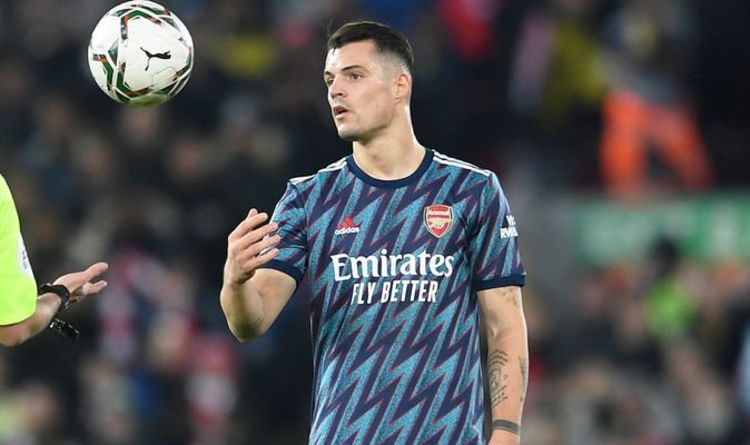 Arsenal boss Mikel Arteta has received some positive news over the suspension of Granit Xhaka. Midfielder Xhaka was sent off in the first half of the Carabao Cup semi-final first leg at Liverpool on Thursday. He was given a straight red card for a high tackle on Liverpool forward Diogo Jota.

Arsenal played the match for over an hour with 10 men but dug out an impressive goalless draw.

Referee Michael Oliver had no hesitation in sending Xhaka off.

However, it was not clear what the severity of his suspension would be.

It was Xhaka’s second red card of the season, meaning he will face an extra match on top of his suspension.

JUST IN: Antonio Conte has three signings on Tottenham ‘wishlist’ in blow to Adama Traore

If Oliver deemed the tackle to be violent conduct or serious foul play, Xhaka would have been missed for four matches.

However, football.london claims Xhaka will only miss two games because it was a professional foul which denied a goalscoring opportunity.

The Switzerland midfielder will therefore sit out of Sunday’s north London derby at Tottenham and the second leg against Liverpool next Thursday.

He will return for the visit of Burnley on Sunday January 23.

Xhaka only came back into the Arsenal side at Anfield after missing the FA Cup third round defeat to Nottingham Forest after testing positive for COVID-19.

Albert Sambi Lokonga is the only available senior midfielder in the Arsenal squad.

Arteta said his squad was already stretched to the limit ahead of Sunday’s match against their rivals.

“We came here and we are missing nine or 10 players already,” Arteta said.

“Listen, we don’t know what to expect from the next day, so we can’t be looking at that and all the time having to fall into that and using it as an excuse.

“We have to play games, it’s our job, we know the context that we’re in and it can change, and it can change to an even more difficult position, but the team has to rebuild and we have players that have decided to play and on Sunday again we will try to do the same thing.”

Asked if the match against Spurs could be postponed, Arteta said: “I don’t know. It’s a possibility in any game from our side, from the opponents’ side, because of the amount of issues that everybody is having and because it’s happening every week, but we try to prepare for the games thinking that we’re going to play.

“If something happens along the way, it is what it is.”