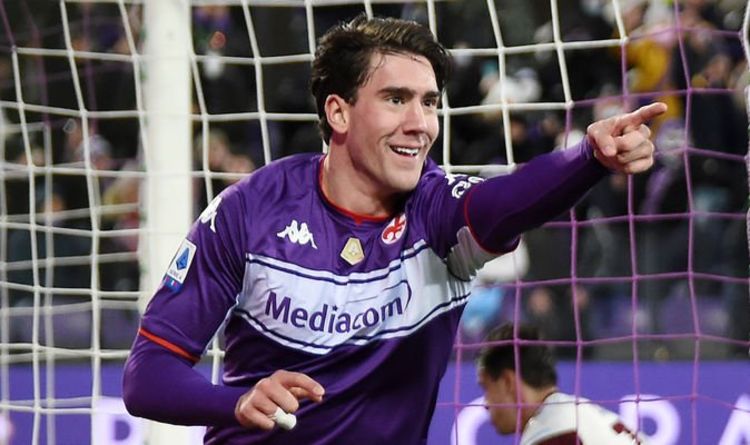 Arsenal’s board are reportedly in agreement after being quoted a mammoth sum to sign Dusan Vlahovic from Fiorentina. With the striker seemingly against signing a new deal out in Italy, a £58million transfer fee could represent could value for money, but there appear to be plenty of other costs involved in the prospective deal.

Manager Mikel Arteta and transfer chief Edu have been in the market for a striker this month.

Matters have been anything but settled among Arsenal’s attacking ranks recently, with Pierre-Emerick Aubemayang’s disciplinary breach making headlines in December.

Meanwhile, neither Eddie Nketiah nor Alexandre Lacazette are likely to sign contract extensions, and Folarin Balogun is closing in on a loan move to Middlesbrough.

Dusan Vlahovic would be a statement signing to bolster their attacking options, but the Gunners face competition from a host of top European sides.

Juventus and Tottenham are believed to be among them, with the 21-year-old already sitting on 16 Serie A goals this campaign.

As such, the Fiorentina youngster is in a strong position to land a bumper pay rise on his current deal, and according to The Daily Mail, he will demand just that.

The report states that a £58m transfer fee will be followed up with pre-tax wages of £300,000-a-week over a five-year deal.

Further fees of £15m are also expected to be paid to members of the player’s camp, leading to a total cost of £150m when all is taken into account.

Nevertheless, the Gunners board are reportedly in agreement that they will not be put off when it comes to their pursuit of the young marksman.

The need for an extra cutting edge in attack was brought into sharp focus on Sunday evening when Arsenal were subjected to a humiliating defeat against Nottingham Forest.

During the FA Cup third round showdown, Arsenal failed to register a single shot on target, despite the likes of Nketiah, Lacazette and Gabriel Martinelli seeing action.

After the final whistle, an irate Arteta was coy when quizzed on whether he and Edu required additional investment this month, after splashing the cash last summer.

“They won, they scored a goal and we didn’t. We were not good enough and we have to apologise for it,” said the Spaniard.

“I don’t want to use excuses, I expect the team I put out to do better and when you don’t in the cup you are out.

“Today showed we were not capable of winning against Forest away from home and didn’t put in the level to win the game.”

January 10, 2022 Soccer Comments Off on Arsenal board in agreement on enormous ‘£150m sum’ needed to sign to Dusan Vlahovic now
NFL News