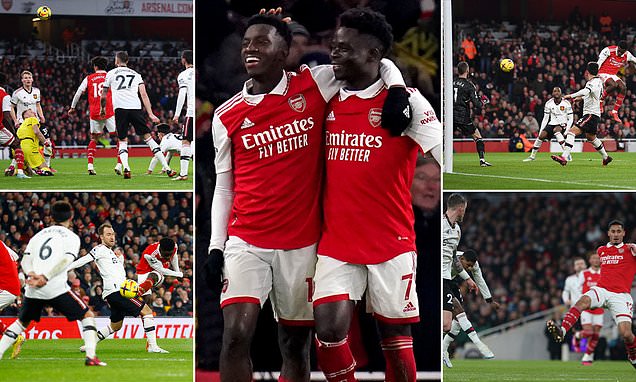 Message delivered by Arsenal once again, this time on a wider and more significant scale.

Last week it was Tottenham and a neighbourhood dispute settled. This time, here on their own precious turf, it was Manchester United despatched with a goal at the death. If Manchester City are to move Mikel Arteta’s team from the top of a Premier League table they have occupied for so long then it seems as though they are going to have to do it themselves.

February 15 and April 26 are the dates to look out for. That is when Arsenal and City meet in the league. With Arsenal’s lead at the top now eight points, having played a game more, it is clear what the defending champions are going to have to do. Win twice is the task and here at a frenzied Emirates was the clearest indication yet of just how difficult that could be. 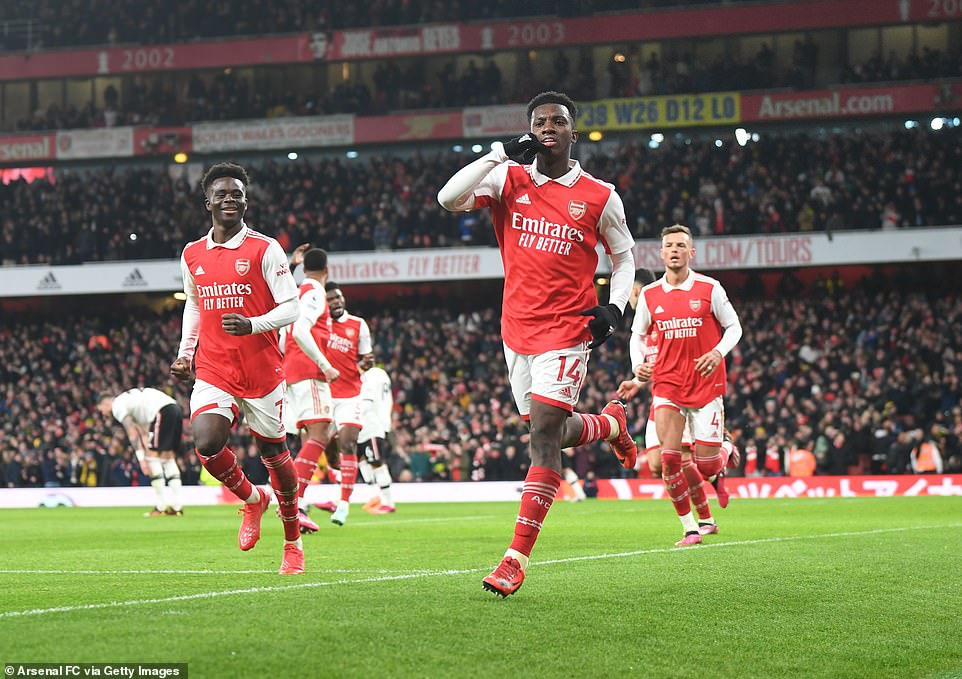 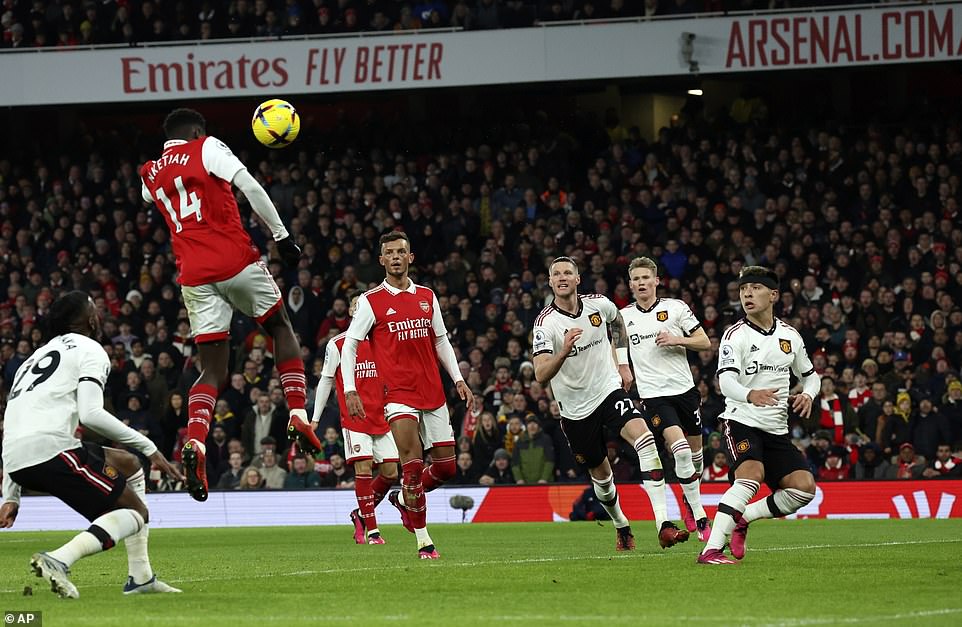 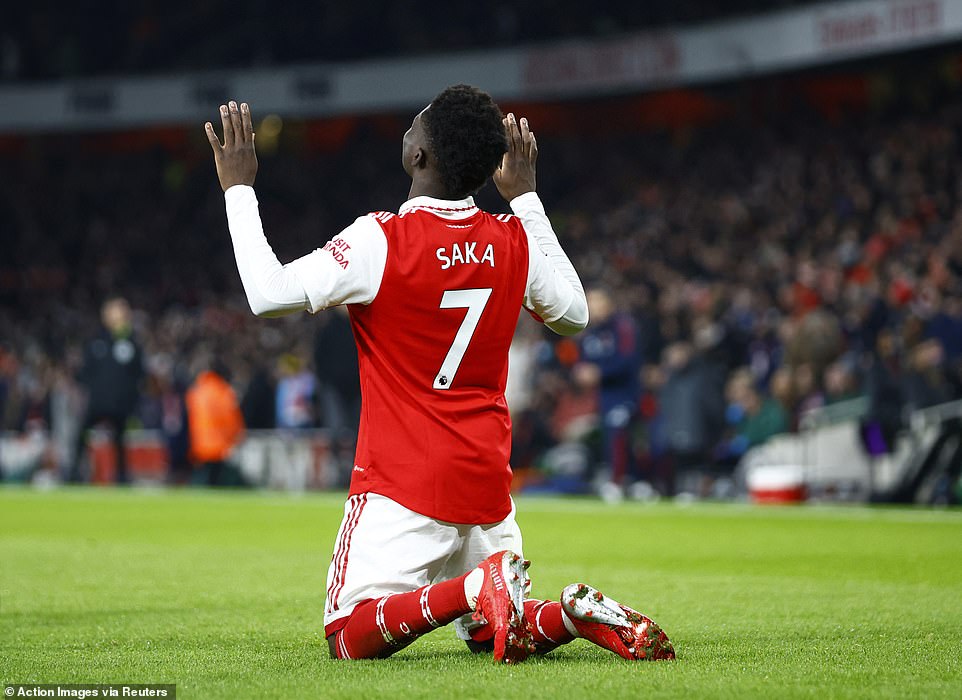 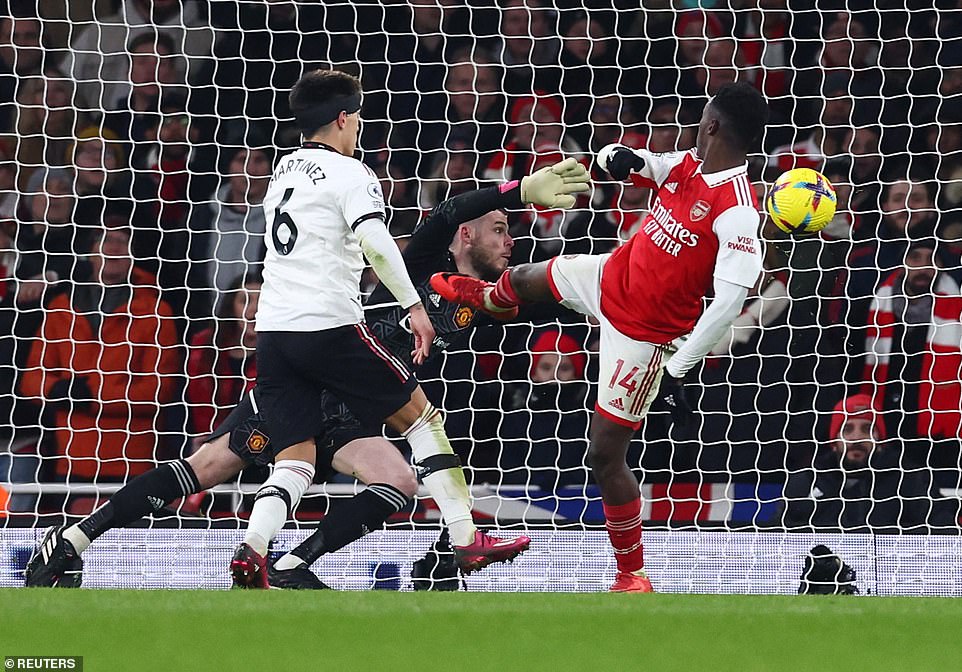 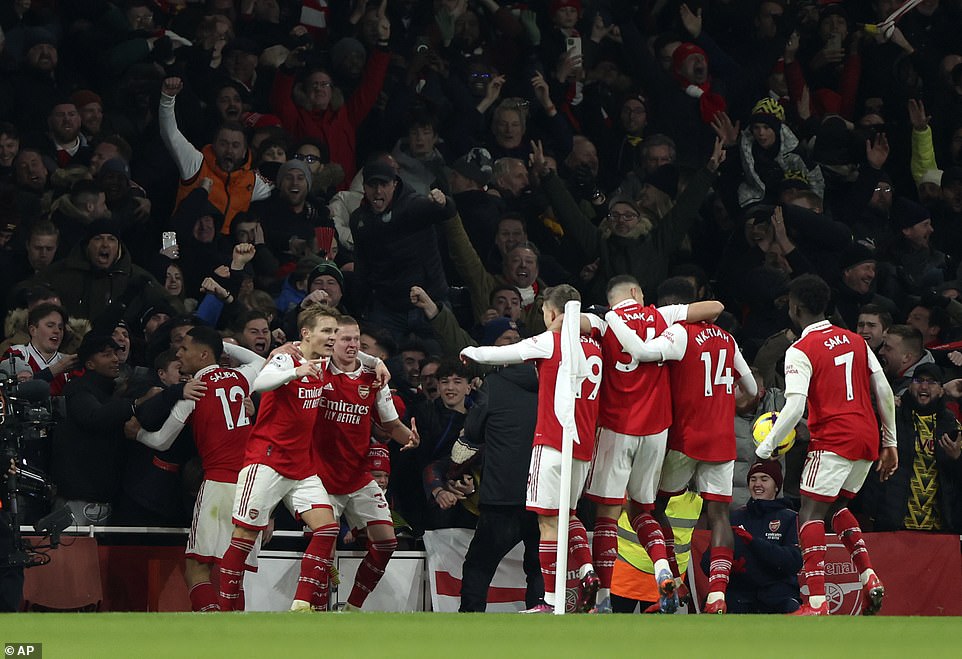 Arteta’s team continue to run hot on belief, energy and good coaching and here they cut United’s legs from them at the death in a manner their great rivals from the north will instantly have recognised. United, after all, have done this to so many teams over the years.

Erik ten Hag’s team were admirable here. They more than played their part in a fabulous game, high on energy, quality and doggedness and cussedness. Arsenal deserved to win, though. They were pushing hardest at the end. They were creating the chances. It was hard to begrudge them when one of them finally went in.

United led early thanks to another superb strike from Marcus Rashford, this time from distance. His ninth in nine games since the domestic season resumed, it was possibly his best. Arsenal responded almost immediately as Eddie Nketiah headed in and then led early in the second half when Bukayo Saka cut inside and drove fabulously past David de Gea from 25 yards. It was perhaps an even better goal than Rashford’s and seemed set to win the game. 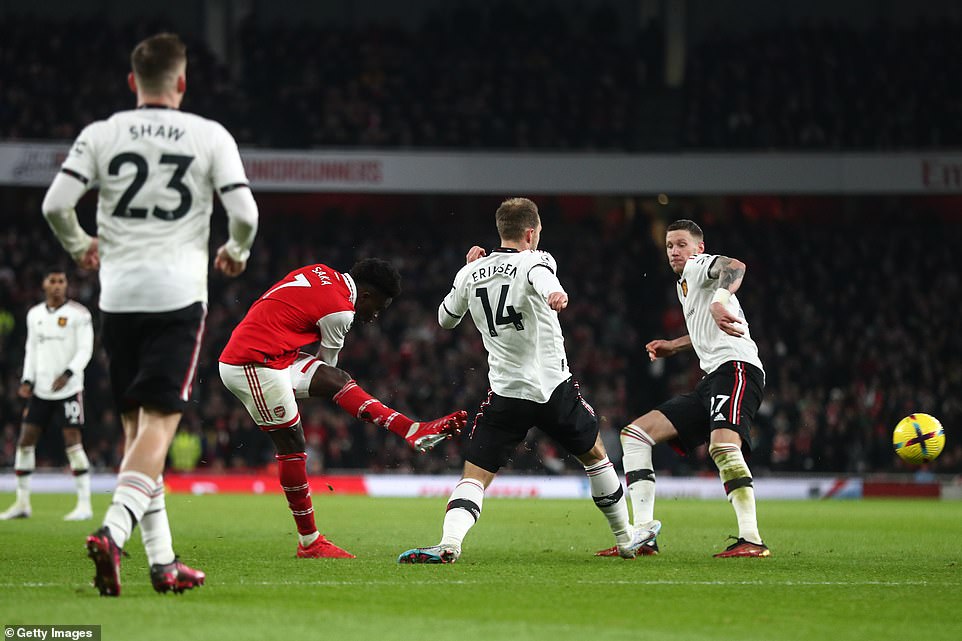 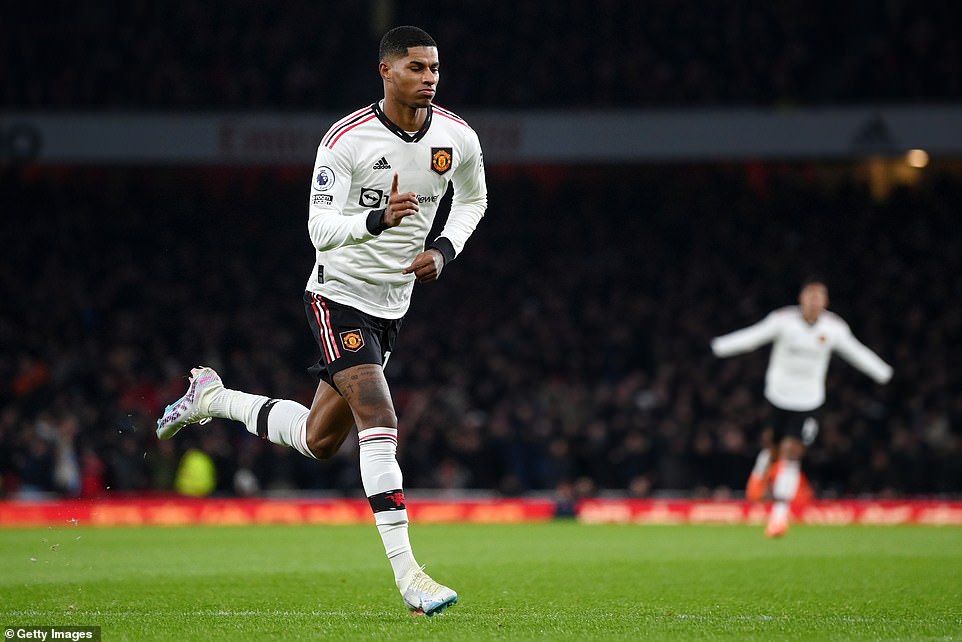 United make teams work hard for their points these days, though. The soft centre Ten Hag inherited from Ralf Rangnick and Ole Gunnar Solskjaer appears to have hardened. And when Arsenal goalkeeper Aaron Ramsdale dropped a corner with just over half an hour to go, United’s World Cup winning defender Lisandro Martinez somehow stooped to head in the equaliser.

It was now Arsenal’s game to chase and they did so. De Gea seemed to have denied them with a superb late save from Nketiah but there was drama still to come. The young Arsenal forward’s back flick from six yards in the 90th minute appeared to have won the game but still we had to endure a VAR delay. Had Nketiah strayed offside? No, was the answer. When confirmation of the goal arrived, it felt like the lid blowing off a kettle here in north London and Arsenal, for now at least, continue to steam ahead.

Their opening to the game had been fast and direct. The intention was to impose themselves on their opponents and use the early energy of the crowd as fuel. For a while it worked. Saka pushed up tight on Luke Shaw on the right. On the other side Gabriel Martinelli did the same to Aaaron Wan-Bissaka. Through the middle of midfield, Martin Odegaard was the dominant force, working triangles and combinations with those ahead and either side of him. 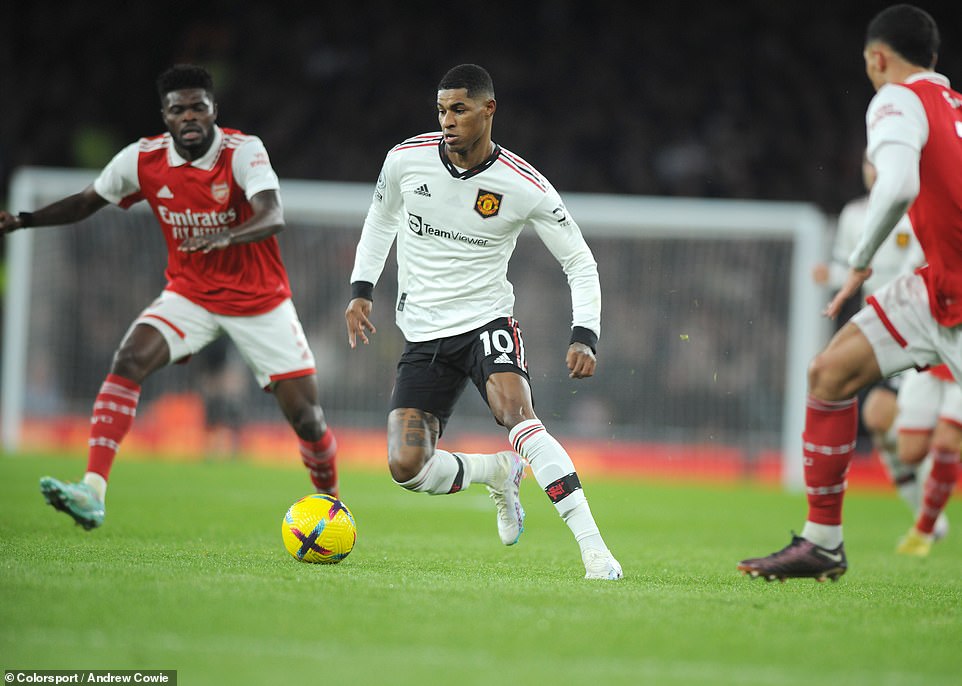 Twice in the opening three minutes, Arsenal worked tight openings for Odegaard and for Thomas Partey. Neither could direct shots on target. Martinelli then curled a shot over from 25 yards on the left before Odegaard robbed Bruno Fernandes and surged forwards.

For almost twenty minutes, it was all Arsenal. United were diligent and hard working and they needed to be to hang on. And then they scored. Not Arsenal, but United.

The home team’s errors contributed to the goal. First Saka lost the ball to Shaw. Then Partey gave it away inside his own half. Rashford didn’t need any more encouragement than that and he evaded Partey’s attempts to atone before pushing the ball outside his feet and then driving a low right foot knuckle ball from 20 yards or more that started outside of Ramsdale’s right post and then swerved back just in time to find the corner of the net.

It was a classic United counter attacking goal. The type that great United teams used to score and the type that this United team scores. As it found the net, the air went out of the Emirates frenzy. This, after all, was what happened when these teams met at Old Trafford last September. Arsenal arguably played more of the football yet United won. 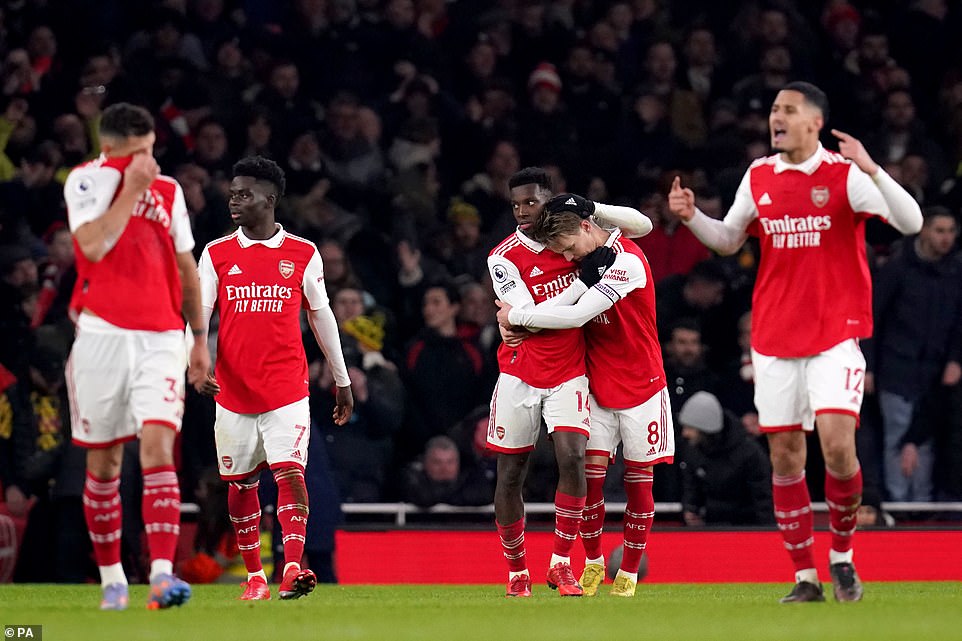 Here Arsenal’s retaliation took a while to get going but when it gathered momentum, they were clinical. Ben White was booked for an ugly scything challenge on Rashford but then Arsenal built slowly to win a corner when Saka’s shot was deflected over by Rafael Varane. And when the ball was recycled down their left hand side they equalised. The source of the cross was unusual, Granit Xhaka. But the quality was in keeping with Arsenal’s football this season and when Nketiah found Wan-Bissaka sleeping at the back post, he stole ahead of him to head past David de Gea from six yards.

It was such an important goal from Arsenal, certainly in its timing. Had United been allowed to settle in to a lead they could have taken some wearing down. As it was, Arsenal pushed for the lead between then and half-time. Arteta was booked as he called for Shaw to be cautioned but this seemed more a reflection of behaviour in recent games than anything he had really done today.

With the game slightly more settled at this point, United were able to build promising positions. Scott McTominay – in for the suspended Casemiro – worked Ramsdale from 25 yards while the Dutch player Antony wasted a good breaking opportunity with a poor pass that didn’t find Rashford. Arsenal, meanwhile, continued to look to Saka who was, on the whole, being controlled reasonably well by Shaw up until that point.

Indeed it was largely because Shaw had done his job so well that Saka was forced to find such an extraordinary way give Arsenal the lead early in the second half. Unable to find a way past Shaw on the outside all afternoon, Saka received the ball 25 yards out and instead turned infield, moving laterally across and in front of Christian Eriksen. There seemed to be little on for Saka at this moment but a space about a foot wide low to De Gea’s right was identified by the England international and the low left foot shot that found it was absolutely perfect. 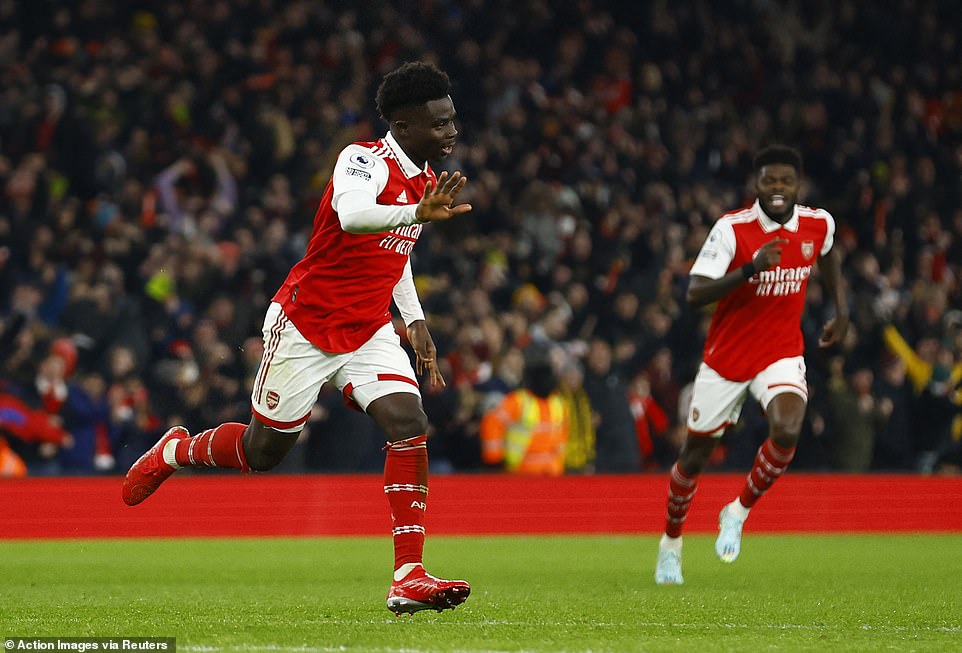 It felt like a definitive blow by Arsenal, even with so long to go. With United now forced to push forwards with greater numbers, Arsenal had their opponents roughly where they wanted them for the first time all day. That it wasn’t to last was entirely their own fault.

Ramsdale’s low save from Rashford minutes after Saka’s goal was superb. The shot was deflected by Xhaka and Ramsdale’s instinctive left handed stop was his best work of the day. What a shame, then, that four minutes later he came needlessly for a corner, dropped it at the feet of Martinez and watched as the United defender somehow found enough power in a stooping header to beat William Saliba on the goal line.

It was fine work from Martinez but what an error from Ramsdale. In a moment Arsenal’s lead at the top of the table was cut to three points and these are the kind of things that can be decisive at the end of a long season. 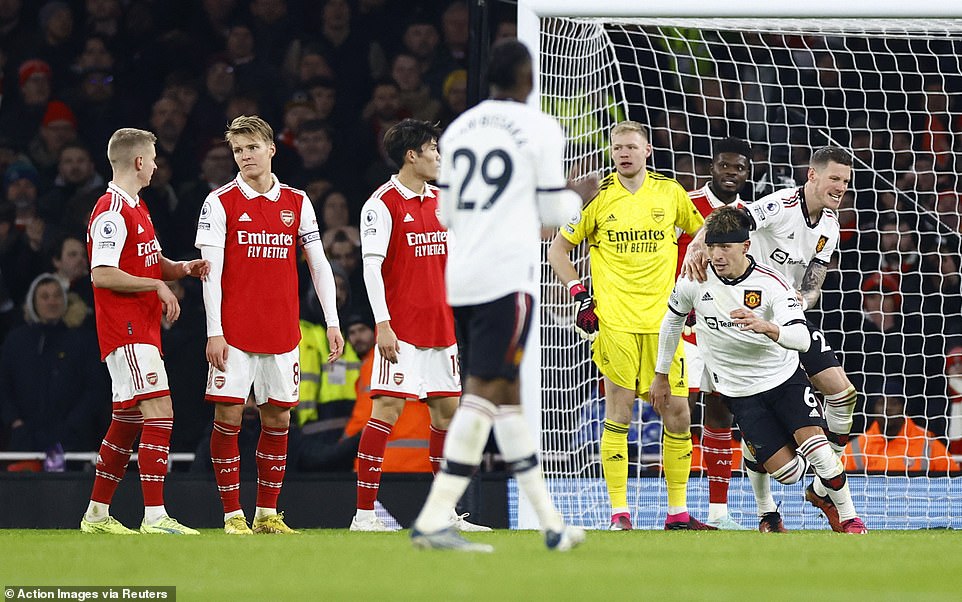 Ramsdale, possibly with his head a little scrambled, was fortunate soon after to dash from goal and make no contact with the breaking Rashford. The United player went to ground but largely of his own volition, so it seemed.

That apart, this was Arsenal’s game to chase and United’s to try and hold. United defended terrifically as Arsenal poured forwards late on, stoutly and with belief. Eriksen deflected another Saka shot over while Odegaard suffered a similar fate from closer in.

Then, with six minutes of normal time left, came a fantastic De Gea’s moment. Nketiah’s shot on the turn was well hit and if we were being fussy we could say he had an awful lot of the goal to aim at. But still De Gea’s instincts were sound and his left arm strong as he dived to turn the shot away.

That seemed to be a point secured for United. Job done. But this is a different Arsenal team to ones we have recently known. They don’t’ stop. They don’t accept. They don’t give in. So it was right at the end of normal time when Oleksandr Zincehnko crossed low from the left, substitute and new signing Leandro Trossard tussled with Fred and when the ball looped up to Nketiah he thrust it in to the net like a horse battering at a stable door.