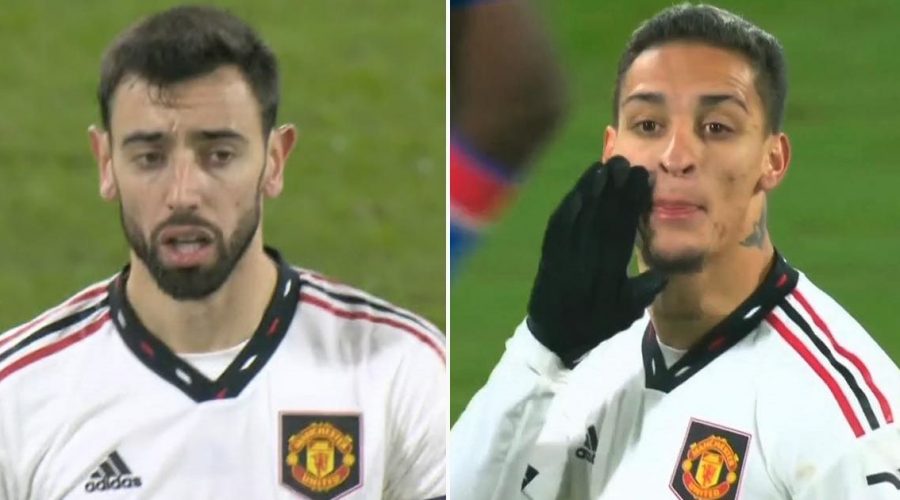 Manchester United star Antony snapped at Bruno Fernandes during the clash with Crystal Palace on Wednesday – and appeared to call his teammate a "motherf*****".

The two stars were involved in a heated on-field row less than half an hour into the match at Selhurst Park after Fernandes expressed his anger at Antony for failing to find him with a pass. Antony had possession of the ball as he drifted out to the right flank with Fernandes ahead of him, but delayed releasing the ball before eventually passing into space as his teammate turned back to stay onside.

Fernandes was up in arms at the pass, which eventually trickled out for a Palace goal kick, but Antony reacted furiously to his colleague, appearing to shout "filho da puta" at him, which translates as motherf***** in Portuguese.

While the pair were at odds in the opening exchanges, their fury was short-lived. Antony came close to breaking the deadlock moments later when his shot skipped just wide of the post after he'd chipped the ball over Palace keeper Vincent Guaita. Wout Weghorst then sent Palace another warning as the Dutchman headed just over the crossbar from Luke Shaw's delivery into the box.

It was Fernandes who then got United's noses in front just before half-time, as he combined with Christian Eriksen to start the move before receiving the ball back and lashing it home past Guaita. The Portuguese midfielder has now scored in each of his last two appearances after netting against Manchester City at the weekend.

He produced another solid attacking display, attempting three shots himself, including his goal, while creating three big chances for his team. Meanwhile Antony was subbed off with just under 20 minutes of normal time remaining, as Alejandro Garnacho came on to replace him.

Who was United's best player against Palace? Have your say in the comments below.

Erik ten Hag's side were unable to hold onto their advantage, however, as Palace winger Michael Olise struck an equaliser from a free-kick in stoppage time to earn a share of the spoils.

United had come into the fixture on the back of a nine-match winning streak and next face Arsenal in a huge showdown on Sunday which could determine whether the Red Devils have what it takes to mount a title challenge this season.