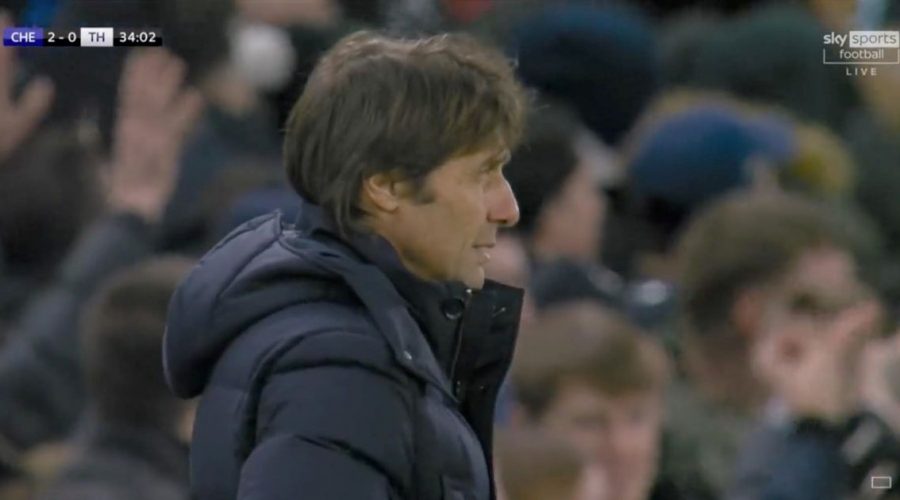 Antonio Conte was spotted cringing as he watched Ben Davies score an embarrassing own goal for Tottenham Hotspur against Chelsea on Wednesday night.

Spurs slipped to a 2-0 defeat against their London rivals in the first leg of their Carabao Cup semi-final at Stamford Bridge, leaving them a mountain to climb in the reverse fixture.

Two first half goals proved to be the difference as Chelsea took an early lead just five minutes in as Kai Havertz scored his fifth goal of the season.

However, it was Chelsea's second goal, 10 minutes before the interval, which left Conte cringing on the touchline.

Japhet Tanganga had appeared to deal with Hakim Ziyech's in-swinging free-kick as he met the ball with his head on the edge of the six yard box.

To most inside the stadium's shock, however, the ball ricocheted off the back of Davies' head, beyond a helpless Hugo Lloris and into the back of the Spurs net.

The embarrassing own goal was made worse by the fact there were no Chelsea players anywhere near either defender as they attempted to clear the ball.

Davies' ordeal was made worse by the commentator labelling it a “farcical goal from a Tottenham point of view” as the cameras quickly panned to the touchline to capture Conte's reaction.

Who will win this season's Carabao Cup? Let us know in the comments section below.

The Italian was seen with an uncomfortable expression on his face as he remained unmoved in his technical area, appearing visibly perplexed by the incident.

Spurs were able to avoid conceding any further goals in the second half but failed to find one themselves, meaning they must overturn a two-goal deficit in next Wednesday's second leg.

If successful, they will face the winner of the tie between Arsenal and Liverpool at Wembley at the end of February.

The Carabao Cup and the FA Cup are the only remaining opportunities this season for Spurs to end their 14-year wait for a major trophy.

Wednesday's defeat was also the first time Conte had lost to his former side, having been unbeaten in his two meetings with Chelsea while Juventus boss.

He guided the Old Lady to a 3-0 home win before a 2-2 draw at Stamford Bridge during the Champions League group stage in 2012.