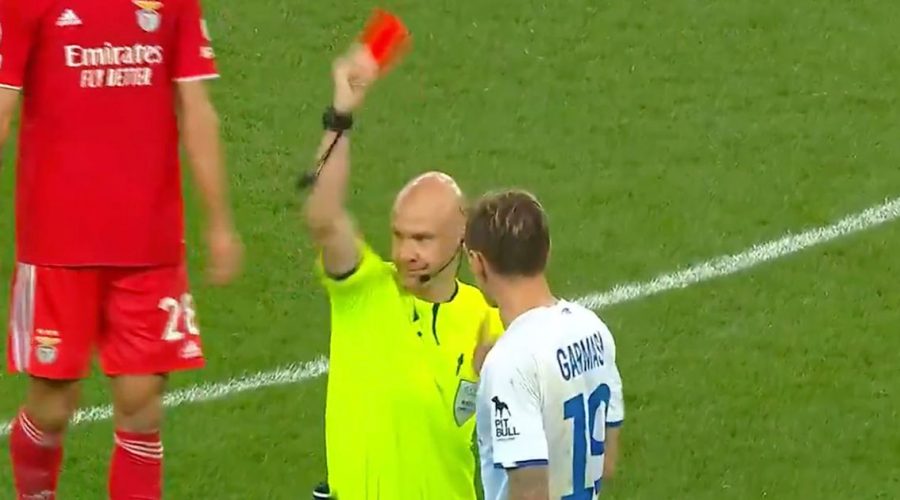 English referee Anthony Taylor was forced to embarrassingly overturn a red card decision after making a questionable blunder in the opening night of the Champions League.

English clubs failed to impress on the first night of the European group stage, with Manchester United losing and Chelsea only winning by a one-goal margin.

United lost 2-1 to Swiss side BSC Young Boys after Theoson Siebatcheu capitalised on a Jesse Lingard mistake in injury time to secure all three points for his side; Aaron Wan-Bissaka had been sent off for Ole Gunnar Solskjaer’s side in the 35th minute.

Chelsea secured all three points against Zenit St. Petersburg thanks to a Romelu Lukaku strike midway through the second half, however they struggled to break through the Russian side and questions were raised about Thomas Tuchel’s tactics.

But it wasn’t the two football clubs that were the main talking point after Tuesday’s matches, it was 42-year-old referee Taylor, who has gone viral for his mishap.

Whilst refereeing Dynamo Kyev and Benfica, Taylor attempted to dismiss Kyev midfielder Denys Garmash in the 82nd minute for a second yellow card.

Has the standard of refereeing in the Premier League improved recently? Let us know in the comments section.

However, he never showed the Ukrainian a first yellow card.

Taylor was then forced to embarrassingly review his decision, double check the notes he made on the back of his cards and correct his verdict.

The headlines have already been dominated by Taylor this season after he sent off Blues defender Reece James in their match with Liverpool last month.

James appeared to accidentally block a Sadio Mane shot with his hand in the heart of a goalmouth scramble before blocking a Diogo Jota strike and clearing.

The shot ricocheted off of the English defender’s thigh before being knocked away by his swinging right arm. VAR ruled that it was a penalty and, despite being accidental, Taylor decided it warranted a red card too.

The standard of officiating at Euro 2020, where Taylor and other Englishman Michael Oliver, was nothing short of brilliant. There was a clear plan set in place pre-tournament about what were fouls and what was just contact as well as how VAR could be used effectively to ensure it did not disrupt the flow of games.

Just four fixtures into the 2021/22 campaign, although there have been a few blunders here and there, the standard of officiating has improved.

But it will take a lot more to improve the stereotype that all English referees are poor, especially if they continue to make blunders on the European stage.