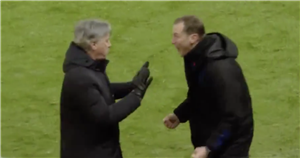 The Toffees salvaged a point at Old Trafford, securing a 3-3 draw after going into half-time 2-0 down.

Dominic Calvert-Lewin latched onto a 95th-minute free to poke the ball past David de Gea and leave the Red Devils hanging their heads.

And footage has emerged of the manager and his assistant having very different reactions to the equaliser.

In the clip, the ball has just hit the back of the net and the goalscorer has wheeled away in celebration.

Ferguson, who spent 11 seasons at Goodison Park as a player, runs down the line – past United’s technical area – to celebrate. On his way back, the Scot yells and pumps his fists while jumping back to his own area, moving close to Ole Gunnar Solskjaer.

He looks for Ancelotti – but the Italian is not impressed with the 49-year-old.

Standing awkwardly in his own technical area, the Everton boss puts his hands in front of him to indicate that he wants Ferguson to calm down.

After a moment’s pause, the former forward simply takes the 61-year-old into a big bear hug. He does not appear to be enjoying it, though, as the Toffees legend continues his wild celebrations.

This footage was shared on Twitter, where viewers were left in stitches at Ancelotti’s awkward reaction to his assistant manager.

“Oh I love this man,” one supporter said.

Another commented: “The way Carlo opts for the casual high-10 is just f***ing brilliant!”

While a third suggested Ancelotti was not worried about upsetting United, writing; “I think Carlo was concerned for his well-being then!” And a fourth added: “Carlo was terrified.”

A fifth suggested Ferguson would replicate a famous celebration from his four-game stint a manager before Ancelotti’s arrival, with: “Surprised Duncan never picked him up like he did with that ball boy.”

With a sixth simply saying: “Carlo wouldn’t let Duncan scoop him up.”

Ferguson was not the only one whose celebration caught the eye, though, as defender Ben Godfrey was caught on camera telling United to “f*** off” after Calvert-Lewin’s goal.