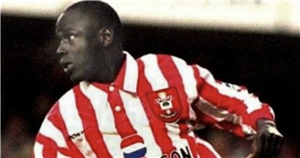 On November 23, 1996, Southampton manager Graeme Souness turned to his bench during a Premier League clash with Leeds United.

With star man Matt Le Tissier carrying a thigh injury, the Saints boss had no choice but to introduce one of his substitutes after just 32 minutes at The Dell, with the score still goalless.

Little did Souness know, however, that his substitution would go down as one of the most iconic Premier League moments of all time.

Because the man he turned to was none other than Ali Dia: football’s greatest ever conman.

Exactly 25 years on from his infamous Saints cameo, Daily Star Sport has taken a look back at the epic story in full, as well as how Dia has become almost untraceable ever since. Dia somehow arrived at Southampton in November 1996 with merely a few lower-league appearances in France and Germany to show for an apparent eight-year footballing career.

However, the legendary bait he used to hook Souness with came in the shape of George Weah – the recently-crowned Ballon d’Or winner who, Dia allegedly claimed at the time, was his cousin.

“He played with Weah at Paris Saint-Germain and last year was playing in the Second Division in Germany,” Souness told reporters in the run-up to his substitute appearance against Leeds.

“We said 'Come down and train with us for a week or so and we’ll see what’s what.'”

The source of Souness’ information was a man claiming to be Weah himself, which the former World Player of the Year has vehemently denied.

But incredibly, he was not the first man to receive a phone call from the prankster.

Harry Redknapp, then West Ham manager, also said: “I keep getting phone calls at the training ground from a guy: ‘Georgie Weah.’ Georgie Weah was world footballer of the year. ‘Lovely George, you wanna play for West Ham?’ He said: ‘No, I have a player for you.’ I thought: ‘This is a wind-up.’”

Unlike Redknapp, Souness had no doubts about the legitimacy of the call and instead handed Dia a week’s trial with the club.

The striker, who initially flattered to deceive in training, was set to be given a run out in their midweek Avon Insurance Combination fixture against Arsenal, only for the game to be rained off.

And when he was dealt an injury crisis in attack, Souness had little choice but to bring Dia into the fold for their next Premier League outing against Leeds.

Terry Cooper, who was on Souness’ training staff at the time, told FourFourTwo: “We were so short of numbers striker-wise that the boy trained with us on the Thursday and the Friday – and to be fair to him, he looked OK in the small-sided games – and Graeme said we would have to put him on the bench because we didn’t have anybody else.

“We were decimated – we only had one fit striker. Now, you can check a player’s background, but back then we had to take a chance on players. We never mentioned what happened again.”

Dia probably couldn't believe his luck at this point, but the best was yet to come for the eventual Premier League cult hero.

Le Tissier’s early setback meant he was sprung into action just after the half-hour mark, earning his first-ever top-flight appearance.

Unfortunately, it quickly became apparent that he was quite alarmingly out of his depth.

Le Tissier had never witnessed anything like it. “He was like a headless chicken,” he recalled, “but the funny thing was he was running everywhere the ball wasn’t – I think he was trying to avoid it.

"I suppose he thought that if he didn’t touch the ball no one would ever get to see just how bad he was.”

Despite being the victim of football’s most incredible dupe, Souness could at least see the funny side when recounting the story in 2004.

“The bottom line is that we'd watched him in training and had made up our minds that he wasn’t good enough. But then in training we had a problem with Le Tiss, and at the same time three other strikers went down injured,” he said.

“Terry Cooper suggested that maybe we should register him for just one game and if he has to go on, he has to go on. And lo and behold, someone was injured within 20 minutes of the kick-off so we had to throw him on. It was quite remarkable as he went for about half an hour without touching the ball. I’d never seen that before.”

After demonstrating that he was most likely no relation of Weah’s, Dia was double-substituted with five minutes remaining against Leeds. He was eventually let go after just 14 days with Saints, which earned him a highly undeserved £2,000 in wages.

Where is he now?

Dia, who would go on to enjoy similarly brief stints with non-league outfits Gateshead and Spennymoor United before seemingly vanishing off the face of the earth, pled his case in his explanation of the scandal two months after that infamous Saints appearance.

But when asked if it was definitely Weah who recommended him to Souness, Dia admitted: “Personally, like I told you, I don’t really know.”

In the time since, the footballing myth that is Ali Dia has been tracked down by various news outlets desperate to hear his side of the classic story – and only one has located him.

Back in 2016, Bleacher Report spoke with Dia’s family in Senegal, including his mother.

And after lengthy conversations with those closest to the former player, he agreed to reach out and tell his own version of the incredible story.

Dia, who a little over four years ago was living in London, spoke on the phone call while on route to a business trip.

"It has been hurtful for me," he told Bleacher report. "My mother is very shy, especially on this topic. She had just wanted me to focus on my studies. I had been getting all A's, and then I [stopped to] play football. I said, 'Mom, I haven't done anything wrong.'

"It allowed me to have a frank conversation with [my son Simon]. There's been a healing process about it.”

Dia was upset at how he has been characterised by the media down the years, adding: "They have portrayed me as a liar, and that is bull.

"I trained against the first team, on the reserve team, for two weeks. [Southampton] knew my abilities. There was a final game before the Leeds game—11 on 11—and I scored two or three goals. I was on fire.

"I earned the spot to be there. Souness said, 'You are in for tomorrow, be ready.' I was not expecting to start. Then the next thing you know, Le Tissier gets injured and I go in. No warm-ups, I just go in.”

Dia has no regrets about his performance, and concluded: “I have a clear conscience. God is going to be our judge."