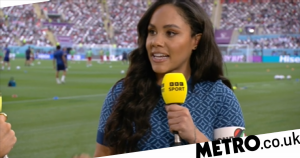 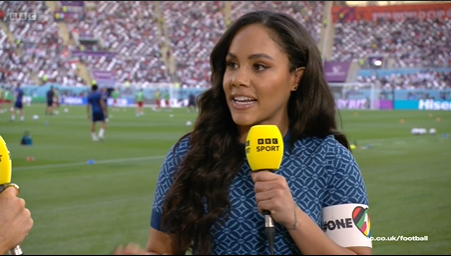 Alex Scott sported the OneLove armband live on the BBC ahead of England’s World Cup clash with Iran on Monday, after it was decided that captain Harry Kane would not wear the strap during the match.

The symbol of inclusion and anti-discrimination was due to be worn by Kane and the captains of six other nations before FIFA threatened punishment for doing so.

The captains could have been shown yellow cards before they played for not wearing the armbands issued by FIFA, which they clearly decided was too much of a threat, so opted against making the gesture.

Scott, though, took her opportunity to sport the rainbow armband in the build-up to the Group B clash in Qatar.

The decision not to wear the OneLove armband due to FIFA’s ruling has been hit with criticism, with former England captain Rio Ferdinand saying the Three Lions and the other nations who wanted to wear the strap have ‘folded like a pack of cards’.

‘They’ve had one bump in the road and they’ve all folded like a pack of cards,’ Ferdinand said on the BBC.

‘If you speak out people say, “You’re not a politician, be quiet, get back in your box”. It’s very difficult now.