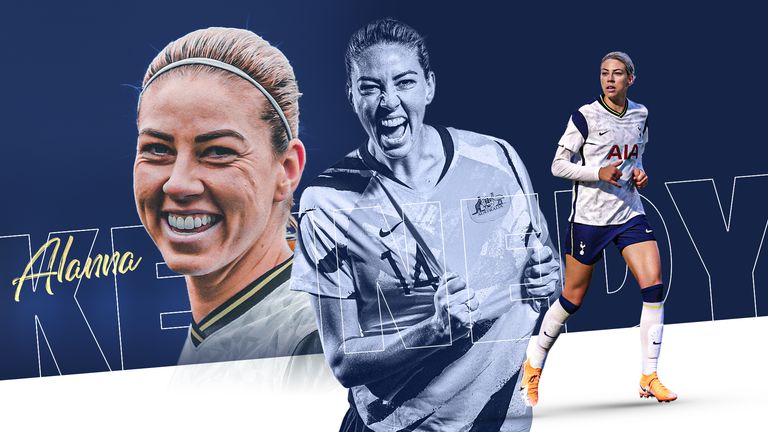 Tottenham defender Alanna Kennedy insists the club will be a force to be reckoned with in the Women’s Super League (WSL) in the not-so-distant future.

The Australia international has made an impact since joining from Orlando Pride in the summer and says a potential top-half finish this season is just the start.

“The club has a great history and I’m excited to be part of it,” Kennedy told Sky Sports’ The Women’s Football Show.

“The team is relatively new to the league but we have so much potential and we’re really building something special.”

Kennedy moved from the NWSL initially on loan before signing permanently in January. She was joined in October by USA superstar and Orlando team-mate Alex Morgan, who joined on a short-term deal as she looked for playing time after the birth of her first child.

“I’m so happy for her, it wasn’t an easy comeback,” she said. “She had a few setbacks along the way and it wasn’t as smooth as she probably planned but it didn’t take her long to be back on the scoresheet and doing what she does best.

“I’m really happy for her to be back doing what she loves. She’s worked really hard to get back and I don’t expect anything else from her. She’s a hard worker off the field and she’s dedicated to both being a mum and being a professional athlete.”

It’s been an interesting season off the field at Tottenham not only because of the club’s transfer business. The side is integrating into the set-up at Spurs Lodge alongside the men’s team and have a new head coach after Rehanne Skinner replaced Karen Hills and Juan Amoros in November.

“It’s hard to say goodbye to any coaches but Rehanne has stepped in and made a huge impact,” Kennedy says. “We’ve embraced the change. She challenges us every day and it’s a good environment to be in and I like the direction she wants to take the club.

Kennedy’s contract at Tottenham runs out at the end of the season and despite Skinner saying she wants to keep her at the club, the Australian is keeping her options open.

“I’ve definitely thought about it but do I know what I’ll be doing? No. I haven’t figured that out just yet, I’m just focusing on the now,” she says.

If Kennedy wanted to move back to the NWSL it’ll be difficult to go back to Orlando. The Pride have traded her rights to new franchise Racing Louisville, leading to further question marks about her future.

“Louisville have my rights, whether I play in America again I have no idea,” she says.

“If I’m being completely honest, I haven’t got a clue at the moment. I’m just seeing what comes up in the next few months and enjoying my time here at Spurs.”

Kennedy was part of the Australia squad that made it to the quarter-finals at the 2016 Olympics in Rio, missing a penalty in a shootout loss to Brazil.

The 26-year old will be part of The Matildas squad this year in Tokyo and is determined to put the disappointment of five years ago behind by going further in the tournament.

“There’s a lot of outside noise about whether it will go ahead but we’re preparing as best as we can,” she says.

“I’m excited, to play at an Olympics is a huge honour for any athlete. After our last go at it we’re looking forward to another crack this year.

“We’ve grown so much of a national team over the last five years. It’s been a long time since we’ve been able to get together during the pandemic but we’re all working hard at our clubs.”

It’s not just her international team-mates Kennedy hasn’t seen for a while, it’s been almost six months since she saw her family in Australia.

Returning home this summer with an Olympic medal after a strong end to the season with Tottenham is her aim, in the short term though, Kennedy’s craving one of life’s little pleasures after pandemic restrictions are lifted.

“I’m looking forward to going to a café, to relax and go for a meal,” she says.

“I love the café culture, it’s really big in Australia and there are some cool places here in London. I really want to explore the city and get some normality back in my life.”

Watch The Women’s Football Show on Sky Sports Football at 6pm on Friday.