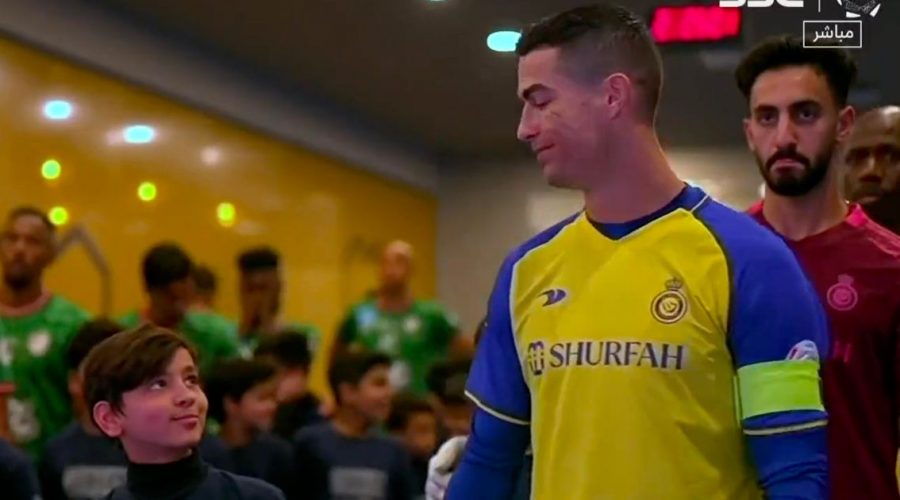 The lucky mascot who walked out with Cristiano Ronaldo for his Al-Nassr debut shared a special moment with him in the tunnel.

Ronaldo starred in a friendly match for a combined Riyadh XI with Al-Hilal against PSG on Thursday (January 19), but he was finally able to make his bow for his new Saudi Arabian club today (January 22) having been suspended for the last two matches.

After being given the captain's armband by manager Rudi Garcia, Ronaldo prepared to head out to play at Mrsool Park for the first time alongside a young mascot – who was quite clearly starstruck.

READ MORE: Cristiano Ronaldo has pretend fight with UFC icon – but fans only notice his toenail

TV cameras showed the boy looking up in awe at the five-time Ballon d'Or winner, who turned around and smiled at him as they caught eyes.

The mascot looked mega impressed as he smiled back, looking at the lens with a big grin on his face before they walked out onto the pitch together.

How would you react to meeting Ronaldo? Let us know in the comments section.

It was another of Al-Nassr's overseas players who secured them a 1-0 win in the home clash with Al-Ettifaq. Brazilian midfielder Anderson Talisca opened the scoring in the first half, netting his 12th goal in 12 league appearances this season.

That was enough for all three points which took them back to the top of the table ahead of Al-Hilal, one point in front with a game in hand too.

While Ronaldo was kicking off his new venture in the Middle East, his former side Manchester United fell to an agonising 3-2 defeat away at Arsenal.

The Red Devils twice drew level against the Gunners, but Eddie Nketiah scored his second of the game in the final minute of normal time to secure a vital win in the Premier League title race.