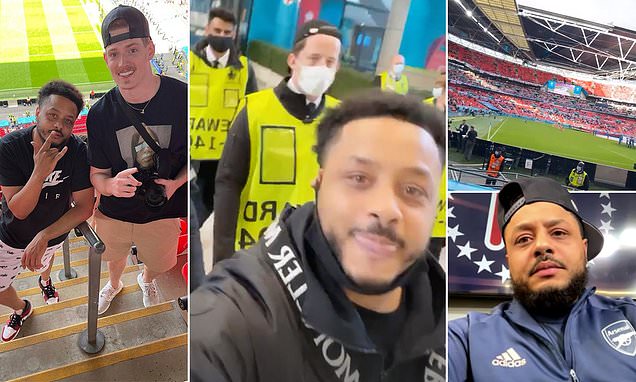 The social media star, who has won an army of fans for his passionate and animated rants over Arsenal’s fortunes, was in attendance to watch the Three Lions and film his reactions to their final game in Group D.

Footage taken from his Instagram account shows Troopz and a cameraman, who goes by the Twitter handle @WayneJetskiii, inside Wembley before the game as they filmed the pre-match scenes and the teams coming out of the tunnel before kick-off. 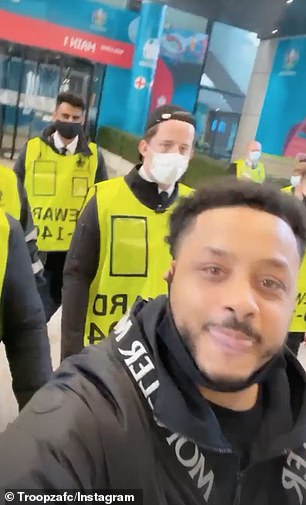 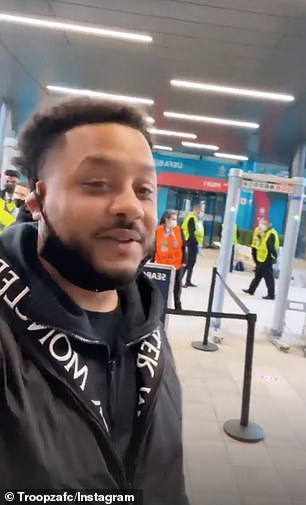 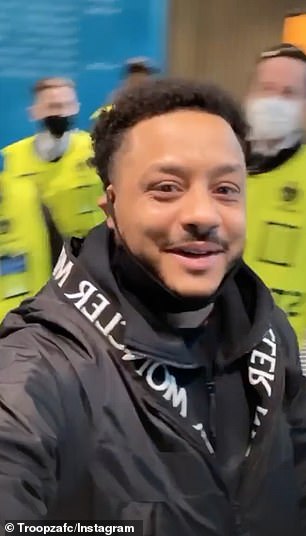 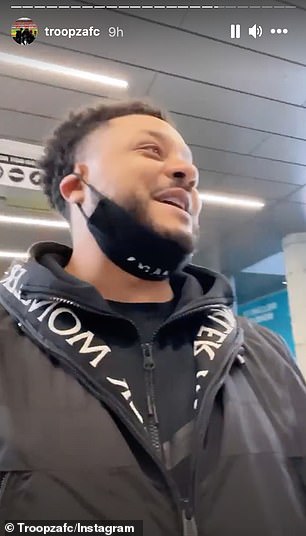 Footage shows Troopz and a cameraman, @WayneJetskiii, being escorted out of the ground 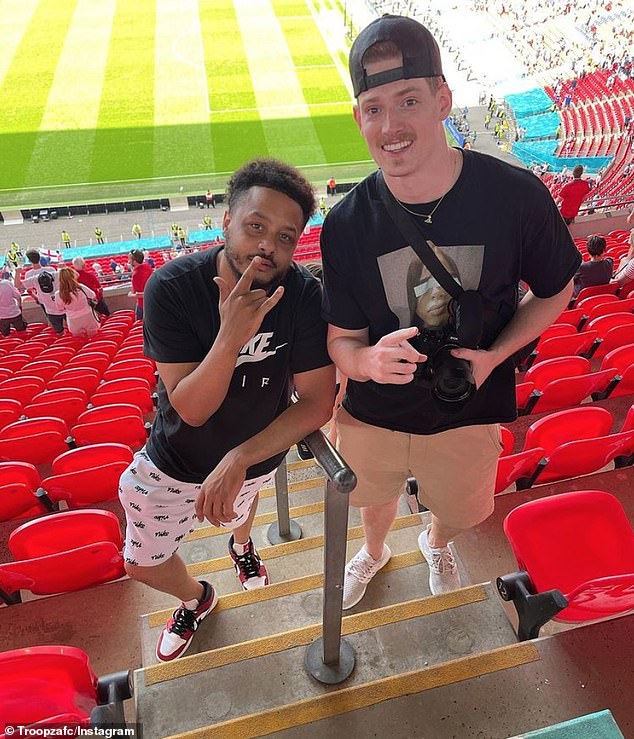 But then it cuts to another post on his Instagram story of both of them being escorted from the stadium by a number of security guards.

Clearly unhappy, Troopz films the moment he is shown the door and says ‘for vlogging’ to the camera in bewilderment at being asked to leave.

As he continues to film the five or six stewards, Troopz tells them: ‘You’re famous now’ and continues to say ‘for vlogging’ as he pleads his innocence.

Troopz, who has 308,000 followers on Instagram, then uploaded another clip of him watching the rest of the game, in which England won 1-0 to secure top spot in the group, in a pub in the Wembley Park area.

It comes just days after he was also filmed watching England’s 0-0 draw with Scotland, in which footage on TikTok shows him furiously kicking seats at Wembley.

The cameraman, @WayneJetskiii, tweeted his fury at the decision to remove them from the stadium on Tuesday night and said they had been to both of this summer’s Euro 2020 games at Wembley so far. 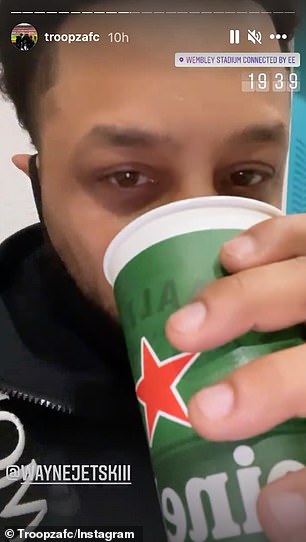 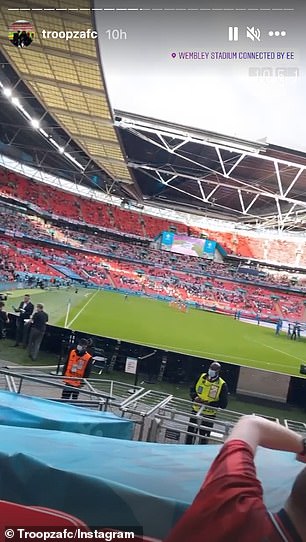 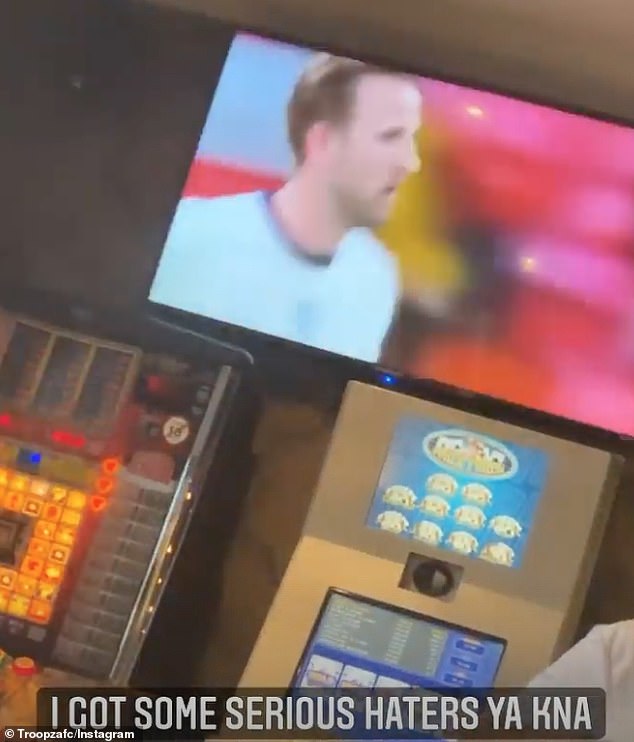 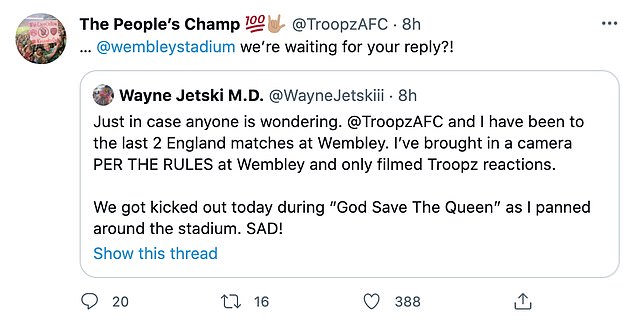 He said: ‘Just in case anyone is wondering. @TroopzAFC and I have been to the last 2 England matches at Wembley.

‘I’ve brought in a camera PER THE RULES at Wembley and only filmed Troopz reactions. We got kicked out today during “God Save The Queen” as I panned around the stadium. SAD!

‘I also offered to check the camera and lock it up for remainder of the game and was further ushered out of the stadium.’

However, Wembley rules say: ‘No person (other than a person who holds an appropriate license) may bring into the Ground or use within the Ground any equipment which is capable of recording or transmitting (by digital or other means) any audio, visual, or audio-visual material or any information or data in relation to the Event of the Ground.’

England beat the Czech Republic 1-0 thanks to Raheem Sterling’s first-half winner as they secure top spot in Group D. 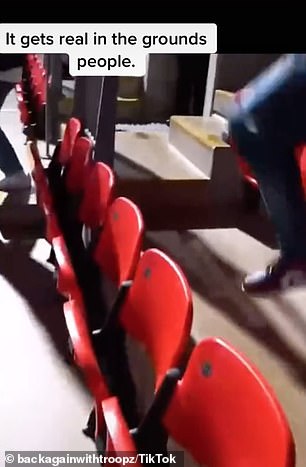 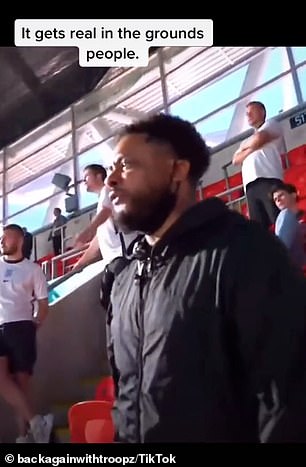 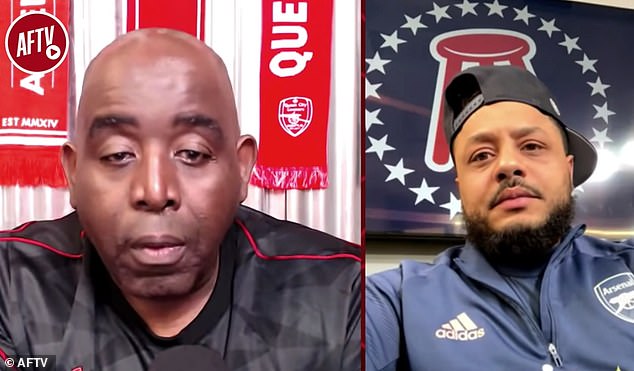 Troopz has risen to prominence on social media in recent years for his bold appearances and rants on AFTV.

The channel has proved a divisive platform over the last few seasons as a result of their passionate reactions to the Gunners’ performances.

AFTV boast over 1.3million subscribers on YouTube and, since its creation in 2012, has generated over a billion views.

Its foundation came during a testing period for the club, with supporters angry at the stagnation on the field, and the channel rapidly became a popular outlet for the fanbase to air their strong opinions after matches.

July 2, 2021 Soccer Comments Off on AFTV star Troopz films himself getting KICKED OUT of Wembley
NFL News