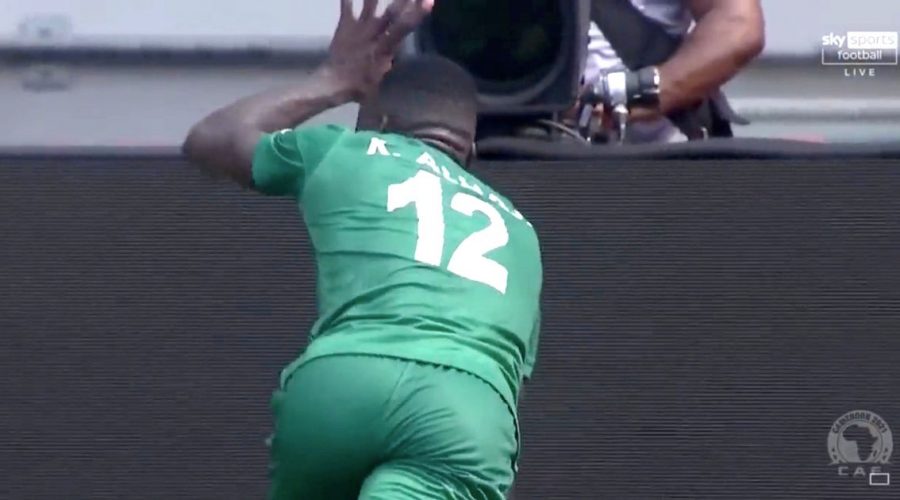 Sierra Leone star Alhaji Kamara comically continued celebrating after putting the ball in the net against Algeria even though the referee had his flag raised for offside.

During the countries’ AFCON group encounter, the title holders were held to a 0-0 draw by Sierra Leone, who at one point believed they had scored the opening goal.

On 47 minutes, Kamara bundled home a cross and then proceeded to deliver an elaborate goal celebration that evoked memories of Bafetimbi Gomis' cat theatrics.

But while he was performing the celebration, the flag was raised for offside by the linesman.

Indeed, Algeria had to settle for a point in their opening AFCON match in Group E.

Kamara put two chances wide in the first half but Alergia turned on the screw in the second.

But Leone Stars managed to hold up to earn a clean sheet.

The draw means Algeria are unbeaten in 35 senior internationals, just two behind Italy who hold the record of 37 games without losing.

Algeria head coach Djamel Belmadi was graceful despite missing out on three points. He lauded the inspired display of the opposition.

“I can’t say that I’m satisfied, the objective being to enter the competition well with the maximum number of points, but it wasn’t possible," Belmadi said as quoted by Caf Online.

Who do you think will win AFCON? Let us know in the comments section.

"But it's not just the conditions, the heat, and humidity. We had a brave opponent in front who left little room. And as the game went on, he had more motivation and reduced the spaces. In the second half, it is true that we had a lot more chances but we must also salute the performance of the opponent.

"And as I said, this Afcon, it will be difficult for everyone."

"We had the reigning African champions Algeria, a great and beautiful team, but we stuck to our strategy which worked. I don't want to highlight a single player even if the goalkeeper [Mohamed N Kamara] was elected man of the match. This is a collective performance and we will continue to do so.”