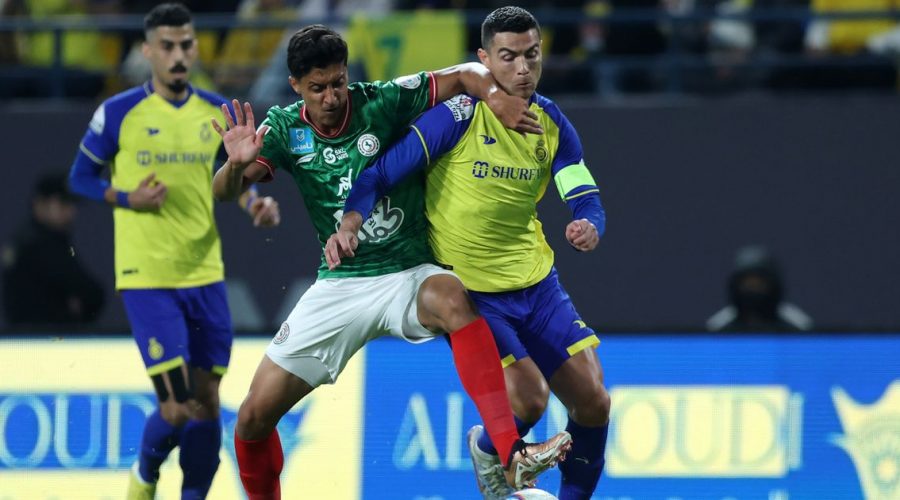 Cristiano Ronaldo got off to a winning start on his long-awaited Al-Nassr debut as they beat Al-Ettifaq 1-0.

The 37-year-old had to wait to make his bow for his new club after being slapped with a two-match ban by the English FA. But following his brace in a friendly for a combined Riyadh XI with Al-Hilal against PSG in the week, he finally got back to competitive action for the first time since Portugal's World Cup exit.

Naturally, Ronaldo was the centre of attention with cameras tracking his every move, even before the game had got underway. They captured a sweet moment between him and the lucky young mascot who got to walk out of the tunnel with him as they locked eyes and smiled at one another.

READ MORE: Fans say Cristiano Ronaldo is 'finished' after clip shows he 'can't do it in Saudi'

He had a busy start to the game at both ends of the pitch, having a shot from the edge of the box blocked before carrying out his defensive duties with a headed clearance in his own 18-yard area.

A penalty claim was waved away after an Ettifaq defender had blocked him from rising for a header with both arms. While he was struggling to get into the game, Nassr's previous star man Anderson Talisca gave them the lead.

What did you make of Ronaldo's debut? Let us know in the comments section.

The Brazilian midfielder nodded home his 12th goal in 12 league appearances from a cross which had just flown over Ronaldo's head before reaching him.

A failed Cruyff turn and an unsuccessful dribble which saw him floored by a tackle earned the former Manchester United man stick online. But he was able to call on his box of tricks to get the home crowd on their feet, sitting down an opponent with a quick turn on one occasion.

His first free-kick in the Middle East didn't go to plan, though, as he blazed it well over the crossbar, while a shot from range also found only the stand behind the goal. Ronaldo nearly got an assist as he fired a great cross to Argentinian team-mate Pity Martinez, who's shot was tipped over the bar. And despite being in his twilight years, he held nothing back as he attempted a spectacular overhead kick.

However, the audacious effort resulted only in a free-kick to Ettifaq after he missed the ball. He nearly had one last chance for a debut goal in stoppage time, but the ball to him was overhit.

Ultimately, it was Talisca who was the man of the match on Ronaldo's big day, but he was more than happy with three points which took Nassr back to the top of the Saudi Pro League ahead of rivals Hilal.

He was all smiles at full-time, celebrating with his team-mates and joining them in clapping the fans inside Mrsool Park after a job well done.