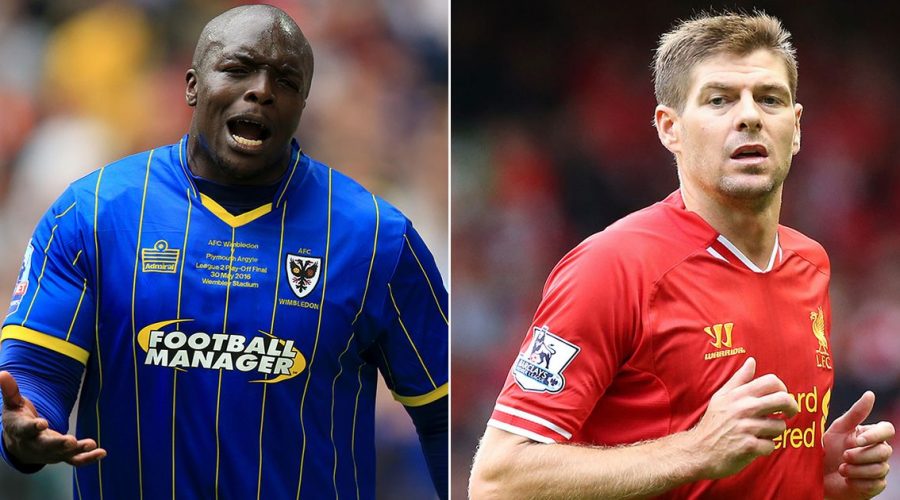 Adebayo Akinfenwa has admitted he was ready to throw hands with his own team-mates on his mission to secure Steven Gerrard's shirt.

The former Wimbledon star called time on his 21-year career this summer after plying his trade for a number of clubs including Millwall, Northampton, Gillingham and Swansea. However, there was one moment at Plough Lane that the ex-striker will never forget.

A self-confessed Liverpool fan, Akinfenwa was over the moon when his team were drawn against the Reds in the FA Cup back in 2015. And no one was going to beat him to his hero Gerrard's shirt after the match had ended – especially his own team-mates.

Speaking on William Hill's Stripped Podcast, the 40-year-old said: “I told everyone that I was going to get Gerrard’s shirt. I loved my Wimbledon team-mates but I threatened them. I won’t sugar-coat it.

"I said, ‘if any of you ask for Stevie G’s shirt, there’s going to be a problem.’ I played with Joe Allen at Swansea, who was at Liverpool at the time, so I gave him a call and arranged it prior.

“I said, ‘tell Stevie that the big man wants his shirt.’ And he text me back saying: ‘Stevie says he’s got you.’ I told the Wimbledon boys it will be a straight-up misunderstanding if you take his shirt.

What would you do to get your hands on your hero's shirt? Comment below

"But Stevie was a man of his word and we embraced afterwards, and then I showed the world that he gave it to me.”

It was a fine day for Akinfenwa, whose side were narrowly defeated on the day against Liverpool, after getting on the scoresheet to draw the scores level. But Gerrard ended the game as man of the match after his two goals saw the Reds leave London with the win and progression to the next round.

“People ask who the best player I’ve played against is. It’s Stevie G,” Akinfenwa added. “And not just because he is my idol, it’s because, 20 minutes into that game, it looked like he had just decided, ‘I’m bored now, let’s go and score.’ He picked the ball up on the halfway line, put it out wide, got in the box and headed it in. That’s what it felt like.

"Later Stevie had a free-kick, and as I walked past him, as he’s putting the ball down he says, ‘sorry big man.’ I look at him like whatever. He puts the ball down and bends it over the wall. The second goal of the game, they win 2-1, and I miss the chance to go back to Anfield.”