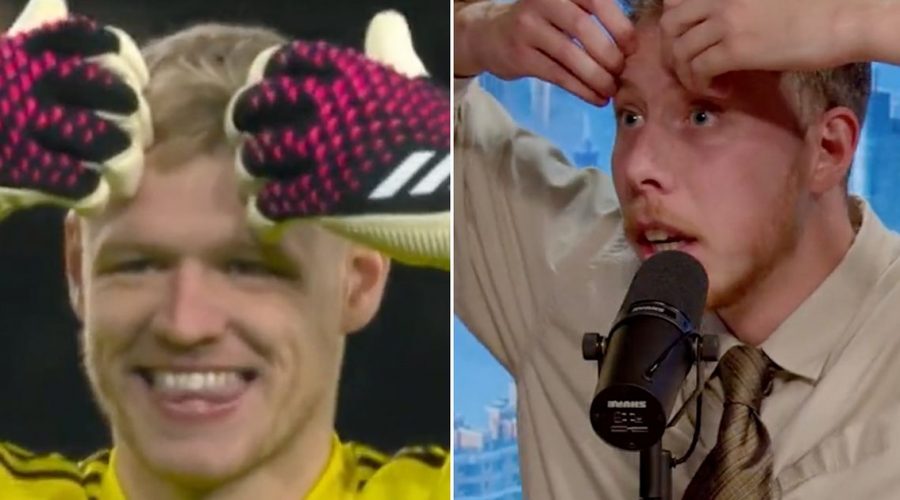 Aaron Ramsdale’s unusual Arsenal celebration was a tribute to a recent podcast he starred in.

The Gunners’ No.1 played a key role in Mikel Arteta ’s side’s vital 3-2 victory over Manchester United. Ramsdale certainly had many reasons to celebrate after his side restored their eight point lead at the top of the Premier League.

While goalkeepers’ celebrations are normally reserved for penalty saves and other miraculous stops, Ramsdale found a moment to mark a potentially historic victory for the Gunners. In spite of the emotions and the excitement from the victory, he still remembered to fulfill one promise he made to ‘The Fellas Podcast’.

Ramsdale was a recent guest on the popular podcast which currently has 543,000 subscribers on YouTube. At the time, Ramsdale promised to do a celebration of their choosing if the Gunners were able to beat United.

What celebration do you want to see Aaron Ramsdale do next? Let us know in the comments section below

YouTuber, and host of the podcast, Calfreezy came up with an idea for the former Sheffield United shot-stopper on the spot. “Okay, I’ve got you, I’ve got you,” Calfreezy said, before naming exactly what he wants Ramsdale to do.

He then asked Ramsdale to do an impression of a person styling a ‘curtains’ hairstyle, by putting both hands in his hair with the palms facing away from each other. “I’ll do that,” Ramsdale said with a very wry grin on his face on the podcast.

Soon after the final whistle went, Ramsdale stayed true to his word by looking into a camera and doing the curtains hairstyle. The England international will certainly be hoping he is still in a position to do mildly amusing celebrations at the very end of the season.

Arsenal’s title challenge appears to be building momentum with every passing week, having recorded seven Premier League victories in their last eight matches. If they are able to maintain their brilliant form at both ends of the pitch, Ramsdale could climax the season by celebrating with the Premier League title.