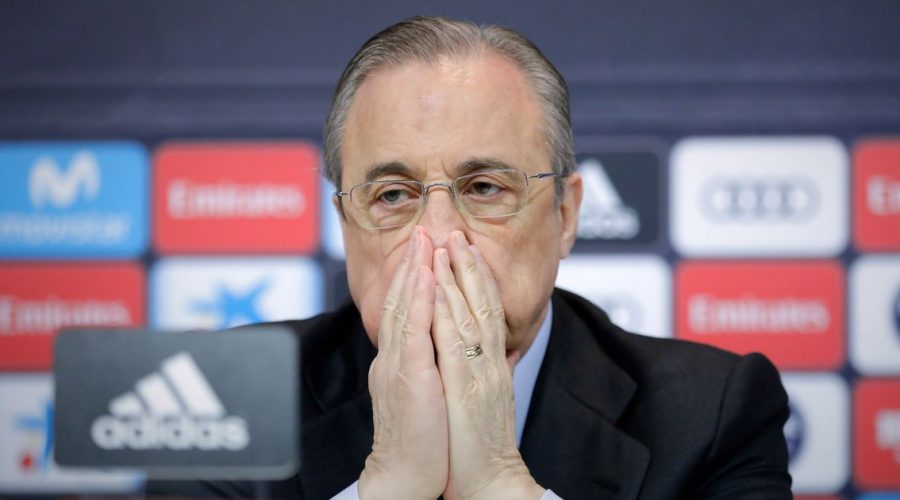 Chelsea and Manchester City in an all-English Champions League final would be a kick in the balls to Florentino Perez and his stupid Super League.

It would show why both teams never should have bothered with the Real Madrid president’s ridiculous breakaway idea in the first place.

And it would send a message to him loud and clear saying: 'We're doing just fine thanks, we don't need you!'

I heard that Madrid and Barcelona were going to get paid more than everyone else for joining the Super League.

So why join them? You’re just putting more money in the pockets of your rivals so they can try and buy Erling Haaland or Kylian Mbappe.

Why do you think Perez wanted six Premier League teams in his Super League? Because we have the best league in the world, that everyone wants to watch.

But teams like Chelsea and City hold all the cards now – reaching the Champions League final would just prove it.

For me it would be great if the final was an all-English one. I love it when our clubs do well in Europe.

We play the most entertaining football in the world. It’s mindblowing the pace our game is played at.

And when English teams are successful in Europe playing that way it’s great to watch.

The Champions League is the greatest competition. The history, the drama. This is where clubs like Chelsea and City should be.

City have never won it. Never even looked like winning it. So they had a cheek signing up to a breakaway in the first place.

The day City and Chelsea are getting into five Champions League finals in a row is the day they can turn around and say maybe this tournament has run it’s course.

But it’s never going to happen. They need to accept this is the biggest competition out there. It’s the one with the history. The one that matters.

City look near-on certainties to reach the final after the first leg against Paris St-Germain.

I’d like to know what happened at half-time because the first half was a walk in the park for PSG. They were slaughtering City.

I just have this image of the PSG players laughing and joking at half-time in the dressing room thinking they were through.

City got their full-backs to bomb on in the second half and suddenly you had Joao Cancelo on the overload and Kyle Walker making 60-yard runs.

They turned the tables so much it was like the two teams had swapped shirts at half-time!

I don’t think PSG bottled it though. They just got blown away – and they let in two atrocious goals. A terrible goalkeeping mistake and a Sunday League shocker.

Chelsea were just head and shoulders above Real in the other semi and could have finished it then and there.

You just hope they don’t end up regretting Timo Werner’s miss, because it WAS a shocking miss, NOT a great save by the keeper.

Sergio Ramos will probably be back for the second leg and he makes a big difference, so can’t count Madrid out. But I hope Chelsea make it.

And I hope they realise how wrong they were forever signing up to the Super League, and never go down that road again.

Is Daniel Ek serious about buying Arsenal? I’m always dubious of things like this.

Who would put on Twitter that they want to buy a football club? I can’t imagine if you wanted to buy JP Morgan you’d do it on social media…

But everyone’s heard of Spotify now, haven’t they? Call me a cynic but it’s great free advertising for them.

If he buys Arsenal I’ll say fair play to him. But I find it very strange. If you really wanted to take over the club you wouldn’t do it like this.

I can’t see any way in a million years that Stan Kroenke sells anyway. Arsenal makes him money.

It’s not like he lives here and the fans can make his life a misery and hound him out. He never goes to the games.

He’s under no pressure to sell and I don’t see why he would. He’s not fussed about the fans. If he was, he wouldn’t have signed up for the Super League.

I would say Arsenal are stuck with him. Will all this heat convince him to spend some money on players? Let’s see. But I doubt it.

Manchester United would LOVE to stop Liverpool qualifying for the Champions League and they could do just that this weekend.

If Chelsea beat Fulham today they go SEVEN points clear of Liverpool, who would have to win at Old Trafford to have any chance of catching them.

Lose to United on Sunday and Liverpool are seven behind, with only four games to play. It’s game over then.

I think this is a huge game for Liverpool. Massive. They really have to win. And they will have to come out and have a real go at United.

I’m expecting fireworks because a draw is no good for Liverpool. They have to attack – and United like it when teams come at them.

They have mind-blowing pace on the counter with players like Marcus Rashford and Mason Greenwood.

Liverpool’s forwards have been missing a lot of chance lately but I still think it’s a domino effect from Virgil Van Dijk being out.

When he plays they press higher, the full-backs bomb on and the forwards get more chances. Without him, they retreat and end up further from goal.

April 30, 2021 Soccer Comments Off on A Chelsea vs Man City final would be ultimate sucker-punch for Florentino Perez
NFL News