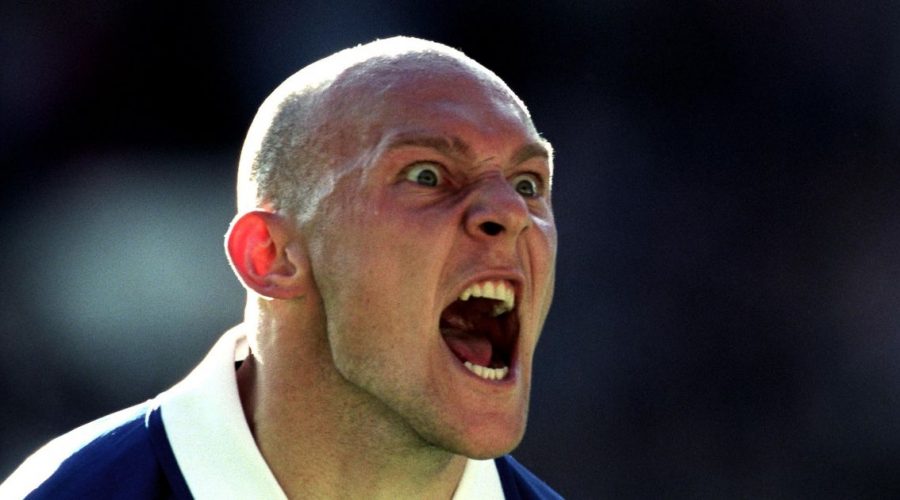 Former Everton and Real Madrid midfielder Thomas Gravesen earned the nickname 'Mad Dog' for a reason, with his reputation as a maverick hardman making him a cult hero among fans.

The former Danish international was known for his wild antics during his playing career and such stories have since become legendary.

Gravesen ultimately retired from football in his early 30s, going onto make millions from investments and playing poker.

He even lived in Las Vegas' so-called 'Millionaire's Row' for eight years, counting the likes of actor Nicolas Cage and tennis star Andre Aggassi as neighbours.

Gravesen has since returned to his hometown of Vejle in Denmark where he works as a pundit and, over a decade after his retirement from football, stories of his colourful career continue to live on.

Gravesen spent five years at Everton, joining the Toffees after Euro 2000 and Scottish forward James McFadden was his team-mate for two years.

In an interview with Open Goal's Si Ferry, McFadden described Gravesen as "mental" and recalled two separate occasions when he brought fireworks and a paintball gun to training.

"He was just a different kind of guy," McFadden said. "He was somebody that in a group, well, you'd try and avoid him.

"He was like the most hyper guy. Ever. All the time. One on one he was fine, but in a group he was a nightmare.

"Once there was me and Jimmy Lumsden – he's about 60 with white hair – Thomas used to throw him about. Over the physio table, everywhere.

"He had this crazy Danish-Scouse accent. Once he brought a paintball gun in and started just shooting people.

"He brought fireworks in one day.

"The physio's room was at the side of one of the pitches. The physio was one of the fittest guys at the club, he was in his 50s and used to play a bit.

"He was running with the injured players when Tommy comes out with a big rocket and fires it right at him."

That was not the only incident involving Gravesen and fireworks during his time at Everton, with manager David Moyes recalling the time the midfielder and Wayne Rooney shot fireworks at each other.

"It was the old gym, it's about 60 yards long. Thomas and Wayne, they were shooting fireworks at each other," he said.

"They had big rockets full of gunpowder, they were holding one end and shooting them at each other."

Moyes added: "Tommy was mental in a good way. He was a great player and we loved him He wouldn't listen but it wasn't in a bad way.

"I think it was a wee bit where he didn't want to hear you and just did his own thing. He was crazy in his training. He was a good lad but mental."

Gravesen was once infamously photographed dangling his genitals over the head of team-mate Claus Jensen during a training session as Denmark prepared for a Euro 2004 qualifier against Romania.

Gravesen apologised for the incident, saying: "It was supposed to be a joke, but it ended up like a stupidity. Nor did I know that there was one who took a picture of it."

Manager Morten Olsen added: "It was done in the signs of certainty and in stupidity, and it was a very unworthy behaviour of a national team player and we have also discussed it, and it is the last time that has happened."

Following his move to Real Madrid in 2006, Gravesen joined up with Galacticos such as Roberto Carlos, Zinedine Zidane, Raul, Luis Figo, David Beckham and Ronaldo.

However, the midfielder did not tone down his antics at Madrid and the 2019 biography 'Mad Dog Gravesen: The Last of the Modern Footballing Mavericks' revealed he once knocked one of Ronaldo's teeth out.

Gravesen is said to have thrown Ronaldo around during a training session, with the incident ending with the forward lying on the ground with one of his teeth missing.

In August 2006, Gravesen was involved in a bust-up with Robinho in training, after the midfielder made a poorly-timed challenge on the Brazilian.

The aftermath was caught on camera, with Gravesen and Robinho squaring up to each other.

"He gave him a kick, then another one. Robinho stopped, looked at him and shoved him in the chest, and then it kicked off. Gravesen wanted to kill him.

"They were separated but Robinho went back to the changing rooms and Gravesen looked and me and said, ‘I’m going to kill him.'"

Real Madrid boss Fabio Capello was not impressed, saying: "His behaviour? I don't like it, he wants everyone to do what he wants, and I have told him so."

Less than a month later, Gravesen was sold to Celtic.

Aidan McGeady played alongside Gravesen at Celtic and the pair were "quite close".

Speaking to Open Goal's Si Ferry, McGeady recalled: "He'd stop training completely. I remember one time, he was just about to shoot, and I'm going 'Tommy! Tommy! Tommy!', and he's just went, about to shoot, the leg comes back, and he just then stops the ball.

"He's holding someone off, and he's going 'Don't shout when I'm about to shoot, la! I hate it! It's the worst thing in football, I hate it la!'

"And I'm like; 'Tommy, I'm just shouting for the ball', and he's going; 'No! Don't ever shout at the shooter! I hate it!' Absolute character, man.

"He came from Real Madrid as well, and he came to us and played a bit at the start, and then Strachan just completely bombed him.

"I was quite close to him though, he used to come and kind of hang about with me, like the two of us were quite close, but I remember another time we were in the dressing room and Strachan's giving a team-talk, he's just finished and I look over at Tommy…

"Tommy's sitting in the corner with a newspaper with eyes cut out of it, looking through."