Will Greenwood was put on the spot at Twickenham where he was hosting a live recording of Will Greenwood’s podcast.

Ahead of the 2019 World Cup in Japan, co-presenter Rupert Cox asked Will for his current World XV, which started a lively debate.

There are plenty of surprises in the team, with New Zealand and England contributing three players each, while South Africa, Wales, and Ireland – the best team in the world according to the new World Rugby ratings – only have one player apiece.

“It’s not that easy to pick – you are under pressure to pick 15 player who will perform, but I would be pleased going in to coach this side,” explained Greenwood.

“It offers me a front row who can handle the ball but who can also bend over and push!

“I have got astronomical line out jumper who can both handle, I have a mongrel for the breakdown, I have got a gain line winner in Billy V and a loose cannon in Matera!”

“Every team needs a little French general and I have got that in my side; then you have Barrett who can win a game on his own.” 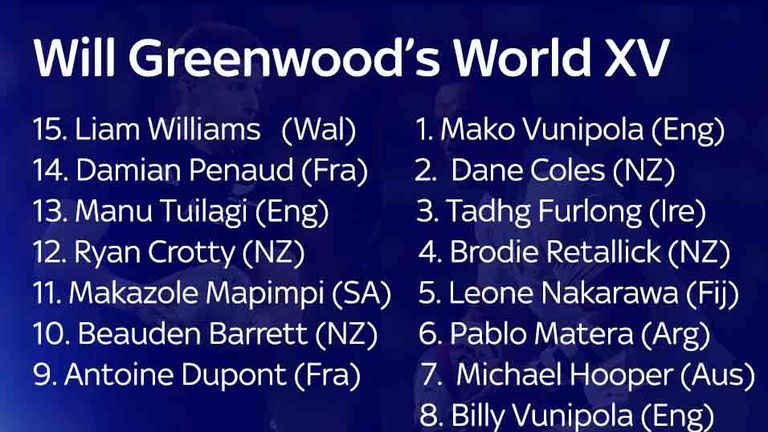 Initially, England’s Johnny May was in the No 11 jersey but after pointing out that there were no South Africans in the side, Greens swapped him out for Mapimpi.

While Mapimpi is the only South African to make the Will’s World XV, he does give Springbok fans something to cheer about.

“To put this into perspective I could easily pick Steven Kitshoff, Malcolm Marx and Frans Malherbe are outstanding. In the second row Eben Etzebeth and RG Snyman could easily slot in there – and I have not even talked about Mostert.

“At No 6 I should have Siya Kolisi there, I like Kwagga Smith, Pieter-Steph Du Toit is a monster and Duane Vermeulen is awesome!

“Then Faf De Klerk at No 9, Handre Pollard at 10. Damian de Allende and Lukhanyo Am in the centre, Cheslin Kolbe and Makazole Mapimpi on the wings and I would have Willie Le Roux in every team – so don’t tell me that they are not going to win the World Cup!”

Click here to listen to the Will Greenwood podcast where Will explains who made it, who didn’t and why! Don’t forget to subscribe!