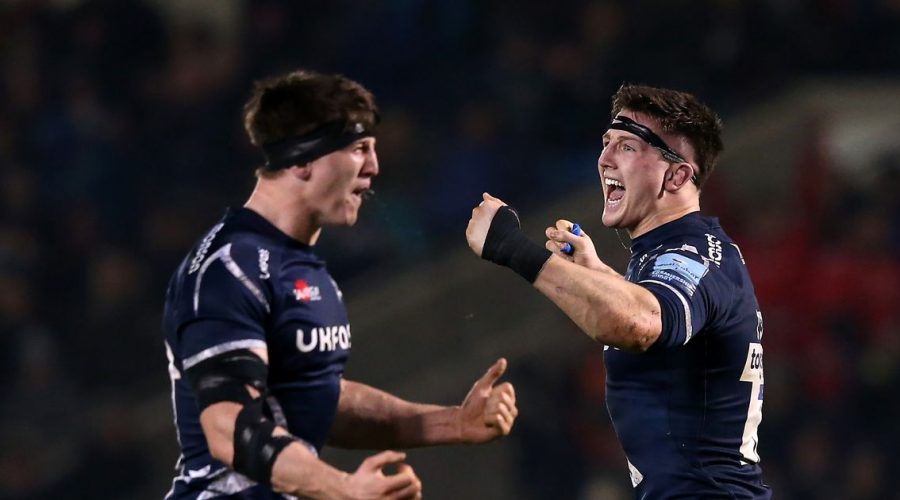 Tom Curry goes hunting with Sharks tomorrow – among a band of brothers in every sense.

The England star has long since made a name for himself and at 22 is already a shoo-in for Lions selection.

Sale boss Alex Sanderson believes he will win 100 caps, Brian O’Driscoll reckons talk of him as a future Richie McCaw is not overdoing it.

But Curry is also a part of one of three sets of brothers at a club attempting to reach the Champions Cup semi-finals for the first time.

And it is this ‘brotherly’ dynamic that Sanderson says is key to Sale Sharks’ shot at history.

“I don’t want to give away too much of our intellectual property but the lads talk about being a ‘brotherhood’,” he said.

“We’ve actually got three sets in the team – the Du Preez, the James and the Currys – but this is a concept the squad as a whole came up with.

“In one sense it’s the support, the trust, the connection. All the fluffy stuff. The fun, the love you get from a brother. On the other side it’s the challenge, the drive that it gives you.

“The competitive nature of one brother wanting to be better than the other. That sibling rivalry. The brutal honesty a brother can give you that no-one else can.”

Sanderson knows this to be true from his own experience growing up alongside older brother Pat, who captained England.

“You always want to beat your brother, yet he is the happiest person for you when you achieve,” he added. “That’s how brothers work. As a group we’re tapping into that dynamic and that energy.”

Whichever way they look at it Sale have their work cut out to improve on 2006, when they lost narrowly to Biarritz in their only previous quarter-final.

They also have the advantage of two extra days prep given they beat Gloucester last Friday and Sale had to wait until Sunday night to crush Scarlets.

“Their abundant strengths are obvious,” said Sanderson. “But is there any other team in the Premiership that is more suited to matching them physically, bar us? I don’t believe there is.”

And nobody more so than Curry. O’Driscoll marvels at the “levels of commitment and technique” displayed by the back rower whilst “running into everything at 100mph”.

He added: “I saw Jamie George recently say Tom is the first name on the England team sheet. You can see why he’s become everyone’s go-to player.

“I could easily have had him in my Team of the Six Nations, from a side that won only twice.”