A Wallabies workload management loophole could pave the way for David Pocock and Allan Alaalatoa to play every game for the rest of the season as the ACT Brumbies search for a silver lining to their injury woes.

Pocock (calf) and Alaalatoa (wrist) will miss the Brumbies’ derby clash against the NSW Waratahs on Friday night in a major blow to the Canberra club's hopes of resurrecting their season. 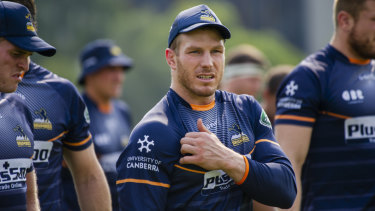 Missing man: David Pocock will miss his second game of the season this week.Credit:Jamila Toderas

Tom Cusack and Les Leuluaialii-Makin will replace them in the starting side and coach Dan McKellar is expected to make more changes as his team attempts to avoid a hat-trick of losses.

Pocock and Alaalatoa's absence is complicated by the need for Super Rugby teams to rest their Wallabies players this season as per an agreement with national coach Michael Cheika.

It's understood the Brumbies had agreed to rest both Pocock and Alaalatoa for at least two games this year. But it was also agreed games missed because of injury would count towards the rest requirements.

That means Pocock, who missed round two because of concussion, and Alaalatota, who is expected to miss next week as well, will fulfil their rest requirements when they're in the injury ward.

McKellar had hoped to rest players for games away from Canberra this season, but injuries will force his hand to be without the two leaders for at least this week.

"The agreement was always that games missed because of injury count to the resting," McKellar said.

"It's a good opportunity now for those guys to get that work into them that they need. We can't rush them back … but Les gets an opportunity and obviously Cusack at No. 7 there.

"Poey didn't play against the [Waikato] Chiefs and we went all right that night, so we're confident in the guys who will step in."

The Brumbies have lost three of their first four games this year, adding extra importance to an interstate showdown with the Waratahs.

But they have won four of their last five games against the Waratahs and are confident their attack can fire them to victory if they maintain pressure for an entire match.

The Brumbies have scored 18 tries this season, putting them second on the attack list behind the high-flying Canterbury Crusaders.

The extra motivation to beat the Waratahs comes from a built-in hatred for NSW, which started when Super Rugby was launched in 1996.

"It's the Tahs at home, an opportunity to get stuck into the New South Welshmen, what more do you need to get excited," McKellar said.

"You're playing against NSW whether it's rugby, marbles or whatever, yeah I'm a Queenslander, but I'm a Brumbies man now and there's a dislike for the Tahs."