Kurtley Beale has labelled the All Blacks the best team in the world but says after two decades of misery at the hands of their trans-Tasman rivals, the Wallabies believe this could be the year they finally win back the Bledisloe Cup.

After a win and a loss against South Africa, Australia’s next assignment is back-to-back Tests against the All Blacks, the first of which takes place on Thursday at Marvel Stadium in Melbourne.

Beale is as qualified as anyone in the Australia set-up to speak about Bledisloe Cup campaigns, having been involved in eight series losses since his first outing against the All Blacks in Melbourne in 2010.

Given the Wallabies have not won the Bledisloe Cup since 2002, Wallabies players have become increasingly reluctant to talk up the team’s hopes of ending one of the most unwanted droughts in Australian sport.

Fans who drape themselves in gold and spend their hard-earned cash on the hottest rugby tickets every year want results, not promises about why this year will be different. But optimist Beale has explained why the group believes it can win at home as well as the hardest venue in world rugby, Eden Park.

“[The feeling of not winning the Bledisloe Cup] has been lingering around the group for the last decade,” Beale said. “We believe that we can get the job done. 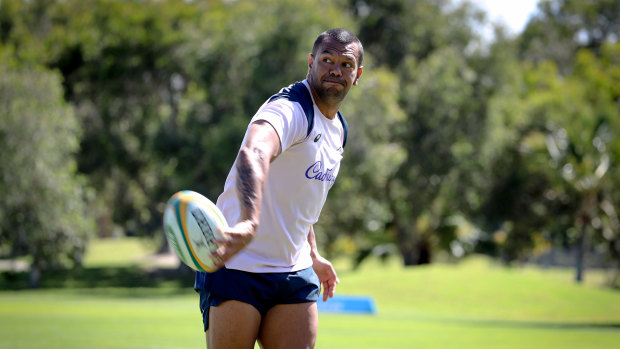 “The greatest motivation now is to play the All Blacks and test ourselves against the best team in the world.

“We’ve also been poked: after last week’s performance [a 24-8 loss to the Springboks], the guys have taken it pretty hard. There’s been a lot of pointing in the chest, a lot of constructive criticism, a lot of harsh conversations, but ones that are quite honest to allow us to bounce back.

“If we have full belief there, that’ll bring that confidence and positive energy and allow us to prepare well to take on possibly the biggest beast in world rugby.”

After being selected in his first Wallabies squad since last year’s spring tour, Beale said he was back to full fitness after a hamstring injury. 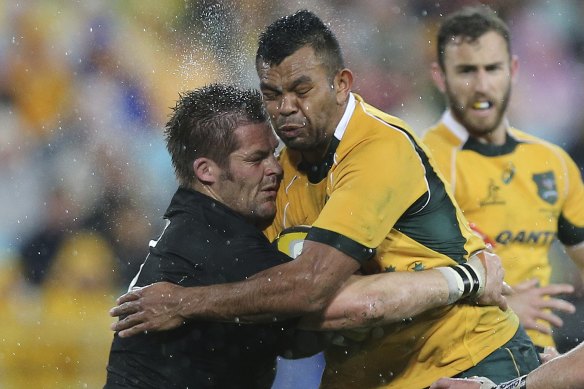 Richie McCaw clashes with Kurtley Beale during their Bledisloe Cup Test in 2014. Credit:AP

Coach Dave Rennie is likely to reintroduce Beale to Test rugby via the bench, but there is no guarantee it will be next week in Melbourne.

After six weeks of intense training, Beale is back to top speed and eyeing the fullback role he took on during last year’s end-of-year tour.

“I feel ready,” Beale said. “The key message from Dave is just to make sure I’m sharp. Pretty straight and simple. He wants me to make sure that I have the speed and agility that I once had. After a long injury, it’s important I’m confident in my ability to display that.

“The team is not selected yet but, for me, I’m just making sure that I’m ready.”

Beale’s time in France has come to an end. He will play for the Waratahs next year in the hope of earning selection at a fourth Rugby World Cup. By then, Beale will be 34. Asked what he needs to do to be primed in 12 months’ time, Beale is succinct.

“The No.1 thing is looking after the body and making sure I’m ready to go at all times,” Beale said. “It’s also about consistency. I know the knowledge and experience is there. It’s just making sure I can back it up and keep giving the team week in, week out.”

The All Blacks arrived in Melbourne on Saturday, but the Wallabies won’t touch down until Tuesday given they are basing themselves in Queensland.

Australia have won three of their past 20 Tests against New Zealand since 2015.

“We’re looking forward to the physical battle,” Wallabies back-rower Rob Leota said. “We have to be better than that after the last game. We reviewed pretty hard.”

Watch every match of The Rugby Championship on the Home of Rugby, Stan Sport. All matches streaming ad-free, live and on demand on Stan Sport.