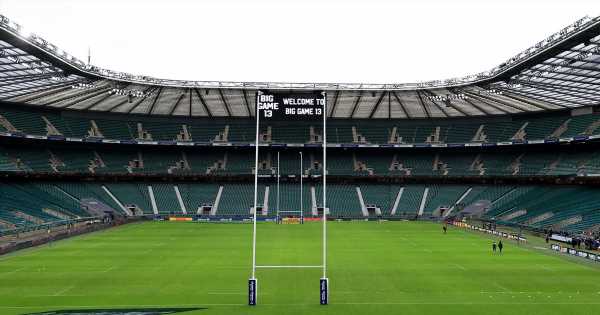 The 2022 Six Nations is at risk of once again seeing games played behind closed doors in certain countries unless the spread of Covid-19 's Omicron variant can be quelled.

This year's competition is scheduled to kick off on February 5, but England is the only participating nation currently without any restriction on attendances at sporting events.

As long as they can provide evidence of their vaccination status or have tested negative for the virus in the 48 hours leading up to said event, spectators are free to attend fixtures across England.

That's in stark contrast to neighbours Wales, where all crowds remain banned at sporting events, while outdoor events in Scotland are capped off at a maximum of 500.

Ireland and France, meanwhile, are currently allowing up to 5,000 people attend games, while Italy tightened restrictions on the unvaccinated in December, with their 'Covid pass' system set to remain until at least mid-January.

Both unions and organisers are now seeking clarity on what this means for the 2022 Six Nations, but the Telegraph reported organisers will hold matches without fans before they consider postponing.

Due to a lack of wiggle room in the rugby calendar and with the 2023 Rugby World Cup looming, rugby's higher powers are prioritising the scheduled dates already in place to ensure the tournament finishes on time.

England boss Eddie Jones may be keen to see fans back, having completed a perfect November series in front of packed Twickenham crowds after his side finished an all-time lowest of fifth in last year's Six Nations.

Given the more liberal stance of England's government, it's touted as a possibility that games could be moved there as a means to ensure they go ahead with fans.

Who do you think will win the 2022 Six Nations Championship? Let us know in the comments section.

However, the Telegraph described that option as "logistically fiendish," not least because it would require a short-notice shuffle for fans getting to a new location and without certainty over how revenue would be split.

Losing attendances once again would be a substantial financial blow to rugby's superpowers as well.

The Welsh Rugby Union (WRU) reported in September that net debt had risen to £114.4million for the year leading up to June 30, 2021, representing an increase of around 50 per cent.

Last year's tournament was played entirely behind closed doors, but Wales fly-half Dan Biggar not long ago spoke of his desire to see games go ahead with full attendance.

“It would be great if we could have fans, wouldn’t it?” he said following Northampton Saints ' recent 41-27 defeat to Harlequins.

“You see what a difference it makes to an occasion. You saw it in the autumn, getting crowds back.

“Everyone coming to games now has to have a passport, they’ll be double or triple-jabbed, and it’s an outdoor event so I don’t see why they wouldn’t be allowed in. As long as it’s safe that’s the most important thing.

"It would be a huge, huge step backwards if there are no crowds moving forwards for clubs and the Six Nations which is obviously such a show-piece event.”

France President Emmanuel Macron recently confirmed all athletes entering the country from January 15 must be double-jabbed in order to do so, forcing the hands of certain stars who may oppose the vaccine.

January 4, 2022 Rugby Union Comments Off on Six Nations preparing for crowd-less games as Covid-19 delays ‘not an option’
NFL News