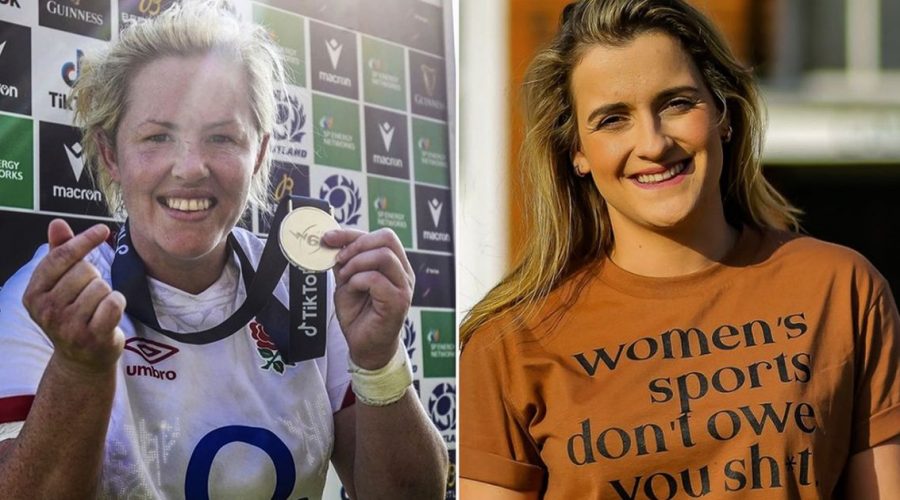 A quarter-of-a-century on from men's rugby turning professional, and the women's sport is showing encouraging signs of closing the gap.

That side of the game has long been viewed as something of an after-thought, however, with numerous Premiership clubs still without a women's team. Even those who do make it to the top of their field must still maintain another job to make ends meet, which inevitably impacts their ability to train and recover properly.

It's a system set up to limit the development of women's players, or at least slow their progress in its current state. The cycle is showing signs of breaking, however, with the Women's Six Nations securing its first title sponsor in TikTok, while the sport in general is covered more expansively than ever before.

Mirror Sport spoke with Victoria Rush, the brain behind No Woman No Try —the powerful women's rugby documentary recently released on Amazon Prime —shortly after its premiere. Rush gained attention amid the height of the Covid-19 pandemic when, in 2020, she started the #IAmEnough movement with the aim of empowering women's athletes and combating some of the stigmas associated with female sport.

It's that kind of 'trending' that has helped the drive for equality in the past only to prove short-lived, but Rush hopes her work will pave the path to long-lasting change outside the "echo chambers" of Twitter or Facebook. "That was exactly why I wanted to make this film. How do we take a message, and share it with the people who don't follow me on social media?

"'I'm stood up with a flag and a megaphone all day long; you're all very welcome to join me there!' We don't point fingers," she emphasises. "I don't want [anyone]—especially men who come into this conversation—to feel blame. Somebody else has made a decision in the past that has put us in the position we're in now; that's not your fault, that's not my fault. But how do we bring you on board, into this conversation, without you feeling that?"

The fact remains that money is a key factor under-pinning much of the debate, with the men's sport already suffering in the wake of the pandemic. Detractors would argue the women's game needs to make itself a more marketable product in order to receive more funding.

It's a vicious cycle, however, as the sport needs more coverage and investment in order to evolve. The Allianz Premier 15s is England's elite women's league and yet its streaming service is littered with complaints of fans not being able to consistently access games. Wales ' women, meanwhile are already reaping the benefits of bringing on their first 12 full-time contracted players, surging late on to beat both Ireland and Scotland recently.

No Woman No Try brings exactly the brand of positive media attention that women's rugby needs to continue its growth. It shines a light on endearing personalities like England and Harlequins prop Shaunagh Brown, Worcester star Stef Evans—who is also the founder of women's kit supplier Ruggette RFC —and Zainab Alema, the Sunday Times' Grassroots Sportswoman of the Year for 2020.

It's impossible not to engage with these athletes on a personal level within minutes of hearing about their journeys to where they are now. Brown's tale is well-known to many within rugby circles by now, especially to anyone who witnessed her post-match speech after being named Player of the Match following Harlequins' maiden Premier 15s title:

The England star has worked in the past as a firewoman and British Gas engineer, while she also represented her country in the hammer throw at the 2014 Commonwealth Games before she'd ever picked up a rugby ball. Canada-born Evans suffered from bullying as a youngster before she discovered rugby, and the point at which she recounts her joy at 'finding her home' in the sport is a centrepiece moment in the documentary.

And then there's Richmond prop Alema, who combines her work as a neonatal nurse with her career playing in the second tier of English rugby (as a team-mate of Rush). Her aim is to become the first black, Muslim women's England international, and her enthusiasm to break social norms is sure to have attracted a mass of new supporters.

Without the documentary, for example, few might have known the uncertainty Alema might have felt trying to know for certain whether players could wear a hijab while participating. Or that many women struggle playing in men's shorts, and a lack of funding means their clubs rarely make an effort to supply them, leading Evans to set up Ruggette RFC.

There are other plights female athletes must endure to which most men would remain unaware were it not for new media giving them attention. For example, incontinence in sport is a much greater concern for women than it is for men, and only now are we beginning to get comfortable discussing those topics.

England and Saracens talisman Marlie Packer—who starts against Wales on Saturday after being rotated out for last week's 74-0 thrashing of Italy —agrees women's rugby is "coming through," and the verdict from a 2014 Rugby World Cup -winner (and 2017 runner-up) with more than 70 Test caps carries weight. "I've been around for a long time, and from where it started, it's growing and growing, and it's the exposure that's doing that for us.

"Rome wasn't built in a day, and [the sport] has changed massively," the mother-of-one told Mirror Sport . "And it will keep going, women's rugby is one of the fastest-growing sports in the world, and it has been now for probably a couple of years. So if people can see it, they'll want to do it and be it."

Packer and her partner, Tash, are parents to a one-year-old son named Oliver, and she has to pause when asked what it would mean for her to win a World Cup later this year with him as her witness. "It would mean everything. . .I can't express how it would make me feel, but it would probably be the proudest day of my life. Not just winning the World Cup but to do it, and my son be able to know that and acknowledge it."

"For me, it's about inspiring that [change], whether it's a child—boy or girl, like Oliver—or if it's an adult [just] picking up a ball," the five-time Grand Slam-winner adds. "Because rugby has given me so many life-long friends and allowed me to see the world. I've had some downs with rugby, don't get me wrong, but it's shaped my life and made my life pretty amazing, to be fair."

When quizzed on those previous peaks and troughs that the women's game has made when it comes to equality, the decorated veteran sympathises that not all paths are linear, and some bumps along the road are to be expected. "When something's growing, it doesn't always spike and carry on spiking," Packer explains. "As a rugby player, you have ups and downs. People just see you win at the end, but you have a lot of injuries and things that bring you down. You've got to take the roller-coaster."

That analogy in itself serves as an illustration not just for the plight female athletes must endure, but the more all-encompassing fight women's sports face to reach parity with their male counterparts. Both Rush and and Packer are accepting of the fact that progress is hard to come by, but the sport's profile and worldwide appeal is proof of progress nonetheless.

Rush remarks that—albeit at a time when coverage may be boosted due to the Six Nations—women's rugby is receiving a greater share of the spotlight. Certain outlets feature "seven or eight articles abut the women's game" when you click on their rugby page, which was unfathomable when she was first discovered the sport a little more than 10 years ago.

One fortunate by-product of the pandemic was the Women's Six Nations being delayed so that it didn't clash with the male equivalent, a change that's now been made permanent. As Brown puts it, that frees up broadcasters and journalists to give each game the proper attention, instead of "three buses all arriving at once."

That mauling momentum can only be aided by content like No Woman No Try , which also stars former England and Harlequins winger Ugo Monye, a particularly vocal male champion for the women's game. In the documentary, former British and Irish Lions tourist Monye highlights that it costs little more than effort to tweet or talk about the women's game, shining a light on a comrade that could do with the help.

Hammering home that point that no-one is by means obliged to advocate for change, Rush suggests there are many male figures and personalities who perhaps could do more to campaign for equality.

"I think 'could' is a really big part, because nobody has to do anything," she underlines. "And nobody should say anything that they don't believe. But the [men's] players have a platform that we've never had before. And they can use that to make a real difference. I think that's the really important thing, if you can do it and you're interested in doing it, do it."