Rugby Australia could face the prospect of being powerless to rein in Israel Folau’s inflammatory social media remarks for another four years – unless it pays out his contract – if the Wallabies star is found not guilty at a code of conduct hearing and remains with the code.

After being formally notified for a “high-level breach” of the professional players’ code of conduct, Folau has until 2pm on Wednesday to ask for a code of conduct hearing or accept that his contract will be terminated. 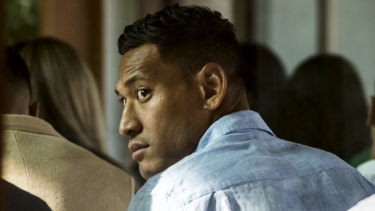 Israel Folau, attending church on Sunday, is yet to contact Rugby Australia about his next course of action.Credit:Steven Siewert

It comes as Folau’s NSW and Australia teammate Nick Phipps praised RA for attempting to deal with the issue quickly.

As of Tuesday night, RA had not heard from Folau but were confident they would have a response from the Wallabies and Waratahs fullback by the afternoon deadline.

Folau is in hot water after controversial posts last Wednesday on Twitter and Instagram, the latter of which suggested homosexuals, among other groups, were destined for hell unless they repented for their sins.

If Folau asks for a hearing in front of a three-person panel, as is expected, it is likely to occur next week.

If Folau is found to have breached the code of conduct, he could be sacked, spelling the end of a glittering rugby career.

However, if the panel finds Folau has not breached the code, there are concerns about what follows. No sanction would theoretically mean Folau is free to post similar sentiments on his social media accounts while continuing his rugby career, which could cause further damage to the game.

In that event, RA could pay out Folau’s multimillion-dollar deal, which runs until the end of 2022, but it would be a financial burden on the game, not to mention the effect it could have on sponsorship deals.

RA finds itself in a tricky situation after resigning Folau for another four years. After a similar remark this time last year, where he said homosexuals were going to ‘‘HELL’’, there are many in rugby circles who were amazed chief executive Raelene Castle signed off on another multi-year deal given his controversial comments. Folau also tested the patience of RA as he was unable to be contacted for more than 24 hours after he posted the comments last week. 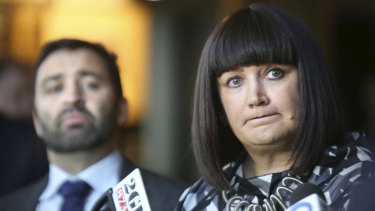 Failing to return calls from Wallabies coach Michael Cheika, the man who lured him to rugby in the first place, left many unimpressed.

Teammates and fellow players, too, are upset they have to front the cameras and speak on the issue.
Phipps, the Waratahs halfback who has played plenty of rugby with Folau over the years, was happy to speak ahead of NSW training on Tuesday. He said the whole saga had been a distraction.

“The fact there was such a big press conference yesterday about it, it’s not too far from all the boys’ vision,” Phipps said. “To be honest though, [as] professional footy players we’re lucky the decision has been made. It’s not really in the players’ control but it was good there was a united stand by RA and NSW Rugby. It’s good it was swiftly dealt with and that gives us an opportunity to move forward as quickly as possible and for the process to run its course.’’

Folau’s younger brother John, also a devout Christian, fronted up for Waratahs training yesterday and Phipps made it clear the team was attempting to make him feel as comfortable as possible.
‘‘It’s no reflection on him,’’ Phipps said. ‘‘He is also a very passionate Christian man and we fully respect that.”

April 16, 2019 Rugby Union Comments Off on Rugby Australia yet to hear from Folau but face unwanted dilemma
NFL News