Jump-started it. Ignited it. Took credit for it, in any case. McCaffrey, a workhorse No.8, was back in Sydney after his first pre-season with the Western Force and heard his former NSW under-16s teammate was battling behind Patrick Phibbs and Josh Valentine at the Brumbies.

He also knew his Shute Shield club Eastwood could do with a peppy halfback. So he picked up the phone. 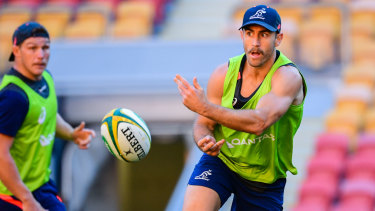 Nic White has the chance to atone for his performance against the All Blacks four years ago.Credit:Stuart Walmsley/Rugby AU Media

"I called Johnny [Manenti] up and said 'I know a very good 9 who's pretty unknown. He'll make life a lot easier for us," McCaffrey recalled.

"We won 24 out of 25 games and won the final against a Sydney University team with 22 Super Rugby players in it. He made a huge impact. The only game we lost, Whitey didn't play in. He still says he never lost a game for Eastwood."

John Manenti coached Eastwood to three Shute Shield premierships. Now the coach of Australia's women's sevens team, he still remembers the Wednesday night make-up game against Warringah they lost in 2011. White, just 20 at the time, didn't play because he spent Sunday to Thursday in Canberra with his paymasters, trekking up the Hume twice a week to make the club's Thursday night training and the game on Saturdays.

"What we're seeing in him now is what he was like at Shute Shield level that year," Manenti said.

"He was the most dominant halfback I’ve seen in my 30 years in club rugby."

White brings his Test career full circle at Eden Park tonight. It was at the All Blacks' fortress four years ago the then 25-year-old fumbled his great chance in the gold jersey.

He'd been pivotal off the bench in the Wallabies' 27-19 win in Sydney the week before, slotting a 48-metre penalty goal and scoring the match-winning try. At the Brumbies he'd barely dropped a game since his first start in the first game of the 2012 season, helping steer the team to the 2013 final and the next two semi-finals. 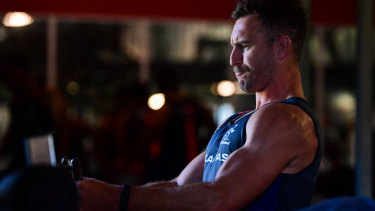 Nic White has taken the long road back to the Wallabies’ No.9 jersey.Credit:Stuart Walmsley/Rugby AU Media

But at the All Blacks' fortress, he stumbled. Australia were blown off the park 41-13 and while it was not solely White's fault, few outside Canberra raised an eyebrow when Cheika named Will Genia and Nick Phipps – with the versatile Matt Giteau as a back-up No.9 option – ahead of him in his 2015 World Cup squad.

White had already agreed to join former coach Jake White at Montpellier, perhaps seeing the writing on the wall when Cheika assumed control at the Wallabies and gave him little game time on the 2014 spring tour.

He spent two seasons in France before joining Exeter in the English Premiership under coach Rob Baxter, where his footy was so good he made Cheika look again.

"I think going away has been really good for him because he’s now played that physical, slower-paced, more attritional football in Europe, which has matured his game and matured the man around it," Manenti said.

"I think it would be great if we could keep everyone in Australia and keep improving them ourselves but the reality is these guys have to make a living.

"If you can get a promotion, payment-wise, to keep the dream alive and improve your game, then that's great. Nic's still potentially got a long time to play for the Wallabies if he stays fit and well so it’s probably been a blessing from Australia's point of view in some ways."

McCaffrey, loyal to the end to the "little tiny kid in a room at the end of the corridor you could always hear from a mile away", views the situation differently.

"I was really disappointed four years ago when Whitey had to look for other opportunities," he said. "What he brings apart fom his skill set and core skills is that he’s the most competitive player I've every played with. His desire to win and to look after his teammates is second to none.

"So while I'm stoked to see the praise he's received since the weekend, I think he's been doing that for the last six or seven years, wherever he's played. 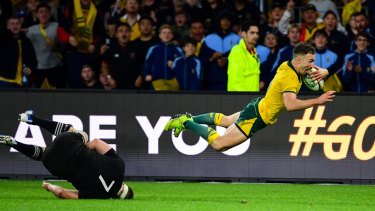 White has always had his Wallabies supporters.Credit:Stuart Walmsley/Rugby AU Media

"Before he even had the chance to settle into the halfback spot for the Wallabies he got the shown the back door and I don't think he got treated fairly. I'm stoked to see him back playing where he belongs."

Whatever White thought of that period, the time overseas has allowed his attitude to selection fortunes to mellow somewhat. His rugby has sharpened, giving the Wallabies a triple threat off the base of the ruck and a less familiar threat than that of his peerless teammate Will Genia, who has played the All Blacks 26 times across a 103-Test career.

"I didn't really feel as though I gave the best of myself in that Wallaby jersey, I didn't feel as confident [as I do now] when I left," he told ESPNscrum.com before his Test return against the Springboks in July.

"Obviously missing out on the last World Cup had a lot to do with it as well. But it probably just comes with age and experience, I feel a little bit more comfortable within myself and in my own ability now to show the best of myself given the opportunity.

"I just think playing with Exeter to what I was playing back in Canberra in terms of holding onto the ball, running a lot more; a lot of play being more around No. 9 and just having the confidence to play that style."

White is the less sensational second-chance story in the Wallabies' back line, but his return has been as satisfying to watch as James O'Connor's, particularly for those who wish he'd never left.