Waratahs back-rower Lachie Swinton has escaped suspension and is free to play for the Wallabies in next month’s France series.

Swinton, who was sent off on Test debut against the All Blacks last year, was red-carded in the 76th minute of the Waratahs’ loss to the Chiefs for a cleanout on Lachlan Boshier. 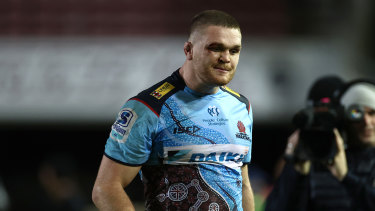 Lachie Swinton after being given his marching orders on Saturday. Credit:Getty

Swinton looked set for a lengthy stint on the sidelines, given his poor disciplinary record, but a SANZAAR judiciary has found the hit, which made contact with Boshier’s head, did not meet the red card threshold.

“Having conducted a detailed review of all the available video footage in conjunction with all other evidence … the judicial committee dismissed the red card,” he said.

“The committee found, after careful analysis of World Rugby’s ‘Head Contact Process and Dangerous Cleanout Framework’, that this contact, while amounting to foul play, was not with a sufficient degree of danger to warrant a red card.

“The player is therefore free to resume playing and no further sanction will be applied. The red card will be expunged from the player’s record.”

Wallabies officials will be thrilled with the outcome and the hearing could be a catalyst for more leniency to players on the attacking team who are cleaning opponents low to the ground.

Coach Dave Rennie can take some credit for the surprise judiciary result given he went public on Sunday to talk down the severity of the incident and go out of his way to speak to Boshier after the match.

“I spoke to Lachie Boshier today who said he didn’t even notice that he’d been smacked on the jaw,” Rennie told reporters on Sunday. “So that probably puts it in context.”

Swinton will remain with the Wallabies squad on the Gold Coast in preparation for the first Test against France on July 7 at the SCG.

Meanwhile, France has confirmed no players involved in the Top 14 final will be named in their 42-man squad that comes to Australia.

La Rochelle, Racing 92, Toulouse and Bordeaux are vying for two spots in the Top 14 final, scheduled for next weekend.

“Top 14 finalists cannot be selected given the isolation conditions that must be met upon arrival in Australia,” said a translated FFR statement.