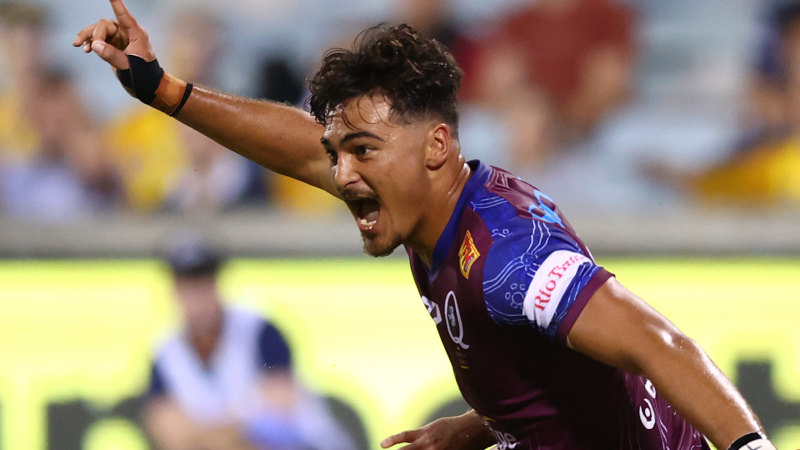 Eight months ago, Jordan Petaia limped off GIO Stadium at half-time in his side’s grand final defeat to the Brumbies.

On Saturday, the 20-year-old and his teammates got sweet revenge in the nation’s capital by snatching a 40-38 victory from the jaws of defeat after taking the lead for the first time in the 79th minute. 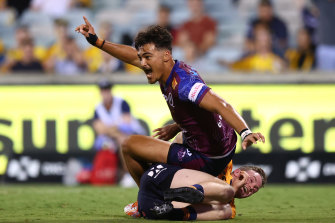 The play of the evening, with Queensland mounting a second comeback, came from a perfectly weighted left-foot grubber kick by Hunter Paisami.

Petaia screamed through and looked to have missed his chance but somehow gathered the ball and dotted it down for a memorable five-pointer that sealed the Reds’ first win in Canberra since 2014.

At one point, the Brumbies looked set for a potential record win over the Reds – their largest victory ever had been 44 points – when they streaked out to a 17-0 lead after 14 minutes.

A momentum swing brought the Reds back into the contest before a Brumbies surge looked to have put the result beyond doubt at 31-16.

We just had to stay in the moment. I thought that was a great showcase of Australian rugby.

Yet when Reds prop Taniela Tupou got some pay from a pick and drive and back-rower Harry Wilson benefited from another damaging scrum, the Reds trailed by only a point with 11 minutes remaining.

Reserve Brumbies back Issak Fines-Leleiwasa appeared to have snared the match winner with nine minutes remaining but Petaia and the Reds had other ideas as they continued their unbeaten run to the competition.

“I’m proud of the guys, we came home strong” Reds captain James O’Connor said. “We have to give Hunter credit for that [last try]. It was his call, we back him, that’s what he can do.

“We just had to stay in the moment. I thought that was a great showcase of Australian rugby.”

The home side had major issues with their usually solid scrum as man of the match Tupou had a night to remember.

Brumbies forwards Folau Fainga’a and Pete Samu bagged two tries apiece and while there were bright spots, Dan McKellar’s team went down in a tight one this time around after their 27-24 win over the Melbourne Rebels last Saturday.

It was the Brumbies’ second loss from 20 recent starts at home, having led 24-16 at the break.

There were rocks and diamonds in Suliasi Vunivalu’s maiden start for the Reds, highlighted by his first try in professional rugby.

While he sprinted back to regather a kick through in back play, he accidentally took the ball back into the in-goal, which resulted in a line dropout. He managed two runs for 21 metres.

Vunivalu spilled a high bomb, was caught out not defending in closer towards a driving Brumbies maul when Fainga’a crossed, but did get on the scorecard and most importantly, was on the winning team.

An early penalty advantage meant the Brumbies could chance their arm and Andy Muirhead seized the opportunity by darting down the right edge, drawing a defender, and throwing a flick pass to try-scorer Samu. Muirhead’s stocks are rising in pursuit of a Wallabies jersey.

Having spent a few weeks on the sidelines due to injuries, normality was restored when Fainga’a executed not one, but two driving-mauls tries that have become synonymous with Brumbies rugby in recent times.

Len Ikatua continued his fabulous season and looked as damaging as ever, yet it was the Reds back line that lifted when the going got tough.

If the Reds beat the Force next week at Suncorp Stadium they will leapfrog the Brumbies into first spot on the ladder.