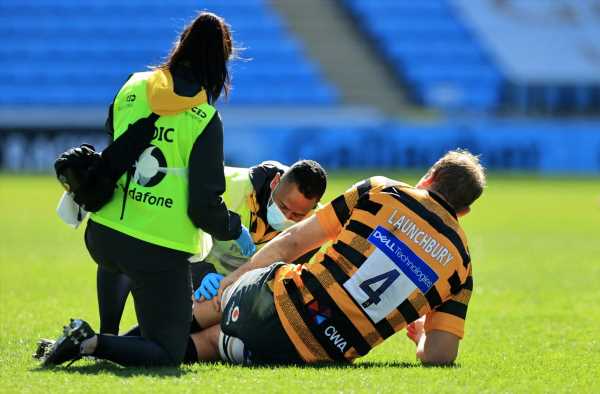 Joe Launchbury suffered the injury while playing for Premiership side Wasps

Wasps lock Joe Launchbury has been ruled out of the British and Irish Lions tour of South Africa after suffering “a complete rupture” of his anterior cruciate ligament.

The England international suffered the knee injury during Wasps’ Premiership fixture against Bath on Saturday and will undergo surgery, his club said.

The 30-year-old missed England’s Six Nations campaign this year with a broken leg, and was previously ruled out of Lions tours in 2013 and 2017.

Lions head coach Warren Gatland is due to name his squad next week for this summer’s tour, and Launchbury would undoubtedly have been part of second-row discussions.

Premiership Rugby said on Tuesday it has reached an agreement with the Lions to release players at the end of their domestic commitments and before the Lions’ warm-up game against Japan.

The match against Japan on June 26 is being held outside World Rugby’s Regulation 9 window for the release of players for international rugby, and the game clashes with the Premiership Final.

That had led to a stand-off between the Lions and the Premiership organisers, potentially jeopardising the start of their July 3-August 7 tour, but the players will now be available for the training camp ahead of the Japan warm-up in Edinburgh.

“This discussion was never just about money,” Premiership Rugby said in a statement.

“It is essential that we are properly consulted – and our position respected – when fixtures are scheduled which impact the domestic season.”

Premiership Rugby said they will not release players until after the season’s final in the future.

The Lions are set for an eight-match tour, including three tests against reigning World Champions South Africa.