A prominent gay rights campaigner has written to the Anti-Discrimination Board of NSW to accuse ex-Wallaby Israel Folau of homosexuality vilification. 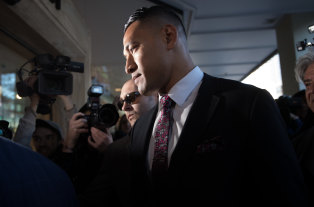 Israel Folau is set to enter mediation with Rugby Australia over his dismissal.Credit:Janie Barrett

Burns has demanded Folau apologise and make a $100,000 donation to a charity.

He wrote that Folau's statements were "objectively capable of incitement of contempt and or hatred of homosexual persons on the ground of their homosexuality".

"To suggest or imply that same-sex couples are causing these dreadful (natural disaster) events to occur, that – I would allege – is vilification because it's singling out a particular group within the community," Burns said.

Folau is set to commence court-ordered mediation with Rugby Australia on Monday in a bid to reach an agreement following his dismssal.