Everyone calls English arrogant but New Zealand are far worse… then again, I guess it’s hard to be humble when you win all the time

Everyone says the English are arrogant, but they are certainly not as arrogant as New Zealand*.

All the Kiwis who I know, like my Harlequins coach Nick Evans, have been telling me how New Zealand are going to smash us! 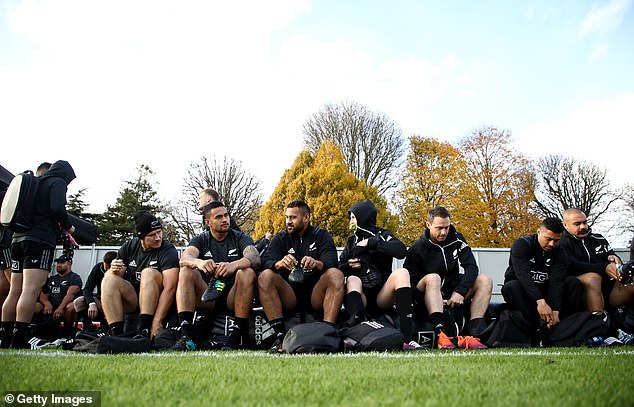 It’s like that guy who wins the Unsung Hero award at work, then updates his Facebook status about it and can’t help bringing his trophy into the office the next day.

Then again, I guess it’s hard to be humble when you win all the time. They’re the best in the world and that deserves respect, but some teams give them too much respect. They get put on a pedestal, but they’re just 15 guys in black tops. The moment you fear them is the moment you’ve lost. A lot of the England players beat them with the Lions last year and they’ll be saying, ‘Listen, these guys are beatable’.

England have to get in Kiwi faces early and make them feel like they are in a fight. As soon as they get some confidence, you look at them and think, ‘Jesus — they are pretty unstoppable’.

You don’t want to see their locks flicking out offloads like they’re Sonny Bill Williams. One of those locks is Brodie Retallick. Now he is a world-class second row but he’s not so good with names!

At a press conference in 2014 he was asked what he thought about his opposite number, Courtney Lawes. 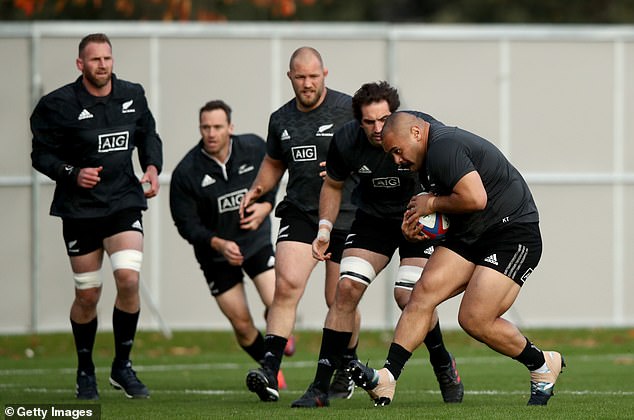 However, I guess it’s tough to be humble when you win all the time like New Zealand

In his answer he kept talking about ‘Michael’ Lawes which wound us up a bit.

I kept calling Brodie ‘Bryan’ during the match that weekend but my tomfoolery backfired and we lost.

After the first Lions Test last year he came up to me and said, ‘Ah, John, how are ya, John?’

It was three years later, so it took me a while to work out what he meant. I’d had a beer or two!

*Let’s all stop calling them the All Blacks, please.

BLACK OR WHITE CASE FOR BRAD

Let’s not beat around the bush, Brad Shields is an England player but he’s not an Englishman. He’s one of the best blokes, but I imagine it will be pretty awkward for him during the national anthem. He’ll probably be humming the Kiwi tune in his head but he’s wearing a white shirt now — and he even skipped his own stag-do to make his debut!

He probably has a bit of bitterness and resentment about not making the cut in New Zealand, so hopefully that brings the best out of him and he fills in some of his old mates. OWEN HAD ME IN A FLAP

Some people might think this is strange, but I left Twickenham before kick-off last week because I wanted to spend the evening with my family. I did my corporate work and then drove home, but stopped in a service station to watch the match. There was no TV or WiFi so I watched it on my phone and used up all my data, while eating a Nando’s chicken.

When that last tackle from Owen Farrell went in, my heart was in my mouth a bit. Some referees, like Wayne Barnes or Nigel Owens, would have given a penalty for that. Fortunately he got away with it so I toasted the victory with a bottle of South African red wine with my wife. 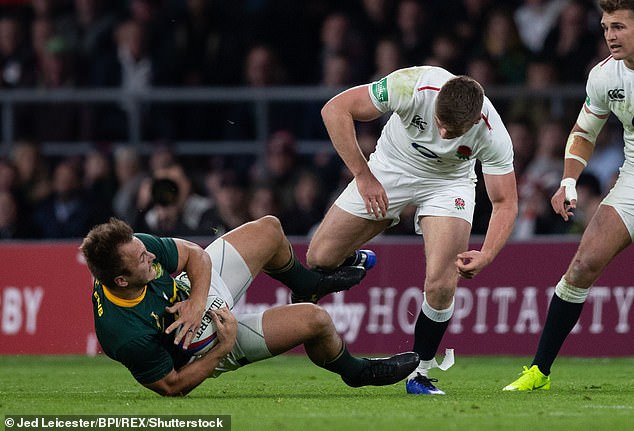 When Owen Farrell made that last-gasp tackle at Twickenham, my heart was in my mouth a bit

MAKE MINE A DOUBLE, EDDIE

There’s been some talk this week about Eddie Jones’ dossier of player notes from the Lions tour. The guys who weren’t picked for the Test team, like myself, spent most of it drinking flat Kiwi beer.

I couldn’t walk in a straight line, let alone write, so it’s a good thing he never asked me for notes. Eddie will appreciate some good tips for bars in Auckland, though! 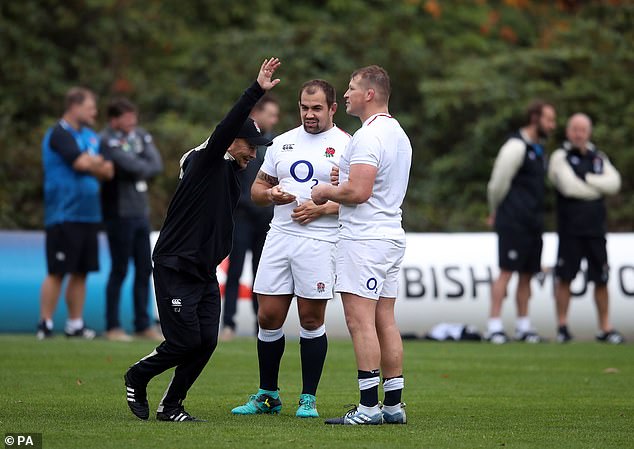 KYLE CAN BOUNCE BIG KARL AROUND

Ex-bouncer Karl Tu’inukuafe has some big boots to fill at loosehead in place of Joe Moody. He’s 21st 3lb and nominated for breakthrough player of the year, but technique is more important than weight when it comes to scrummaging. His opposite number Kyle Sinckler had his best game in an England shirt against South Africa and I can’t wait to see the ‘Young Bull’ transfer that confidence.

The key is to keep a small gap at the engagement and use the hit to affect Tu’inukuafe’s position. If he does that a couple of times, the ref’s decisions will start to go his way. As for England’s bouncer, it has to be Mark Wilson… absolute nails!

If England’s tighthead prop, Ben Moon, was wearing a black jersey, he’d be nominated for breakthrough player of the year, too. I played age-group rugby with Moony and he always started ahead of me. He was playing in the Championship a few years ago but he’s worked his socks off and I absolutely loved it when he smashed Duane Vermeulen last week.

He’s aggressive and clean at the scrum, so he rarely concedes penalties, but he goes after the tight-heads. He’s up against Owen Franks, who is technically world-class and doesn’t show any sign of slowing down even though he’s got over 100 caps. He even took a protein shake to his wedding! 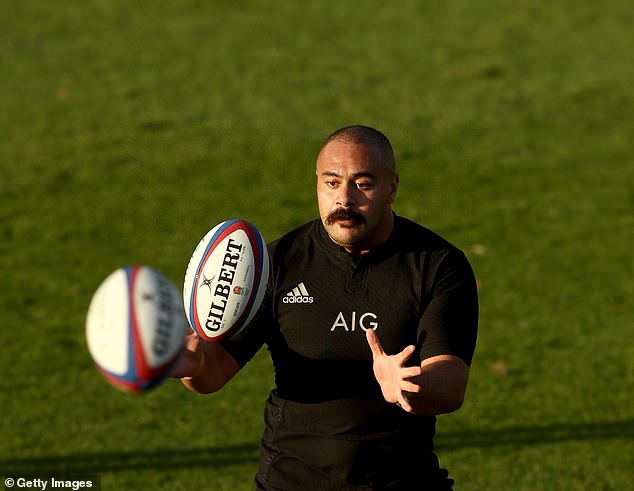 You can’t concede double-digit penalties and expect to beat the All Blacks. They conceded 12 last week and the pack need to clean up their defensive mauls.

Personally, I would look to ‘sack’ the driving maul; that means we don’t jump on the opposition lineout but instead attempt to pull them down as soon as they land. That turns the maul into a ruck and the forwards can put a bit more pressure on Aaron Smith’s box kicks.

Jerome Garces is in charge and he’s not afraid of showing his cards. He sent off Sonny Bill Williams in the second Test against the Lions. Richie McCaw used to get away with murder but the Kiwis don’t have anyone who can influence a game quite as much as he used to. 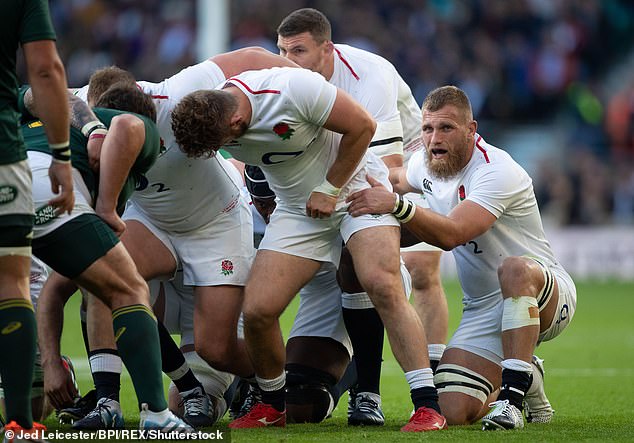