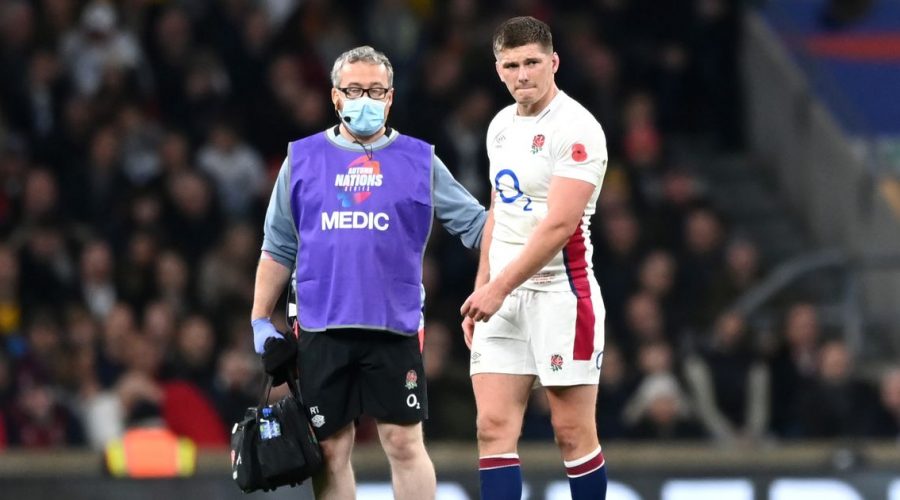 Red Rose captain Farrell, 30, hobbled off the field after 68 minutes and, according to MailOnline, will require an operation to fix the issue around his left ankle.

Details of the injuries are yet to be confirmed by England or their club, but it has also been reported the knee injury that forced George off at half-time against the Wallabies will also keep him out for a significant period.

It means both Saracens stars will be under pressure to be fit in time for England's Six Nations campaign, where the Red Rose is hoping to make amends for their dismal fifth-place finish in the 2021 tournament.

Eddie Jones already knew he'd be without his in-form pair for Saturday's autumn curtain call against South Africa and rejigged his team accordingly for the final Twickenham Test.

The fixture could serve as a preview for how the team will operate without either of those players, with Marcus Smith under new pressure to produce at fly-half in Farrell's absence.

In the event Farrell fails to regain enough fitness in time for the Six Nations, it could also lead to an international reprieve for George Ford, who will leave Leicester Tigersto join Sale Sharks at the end of this season.

Do you think England can win the 2022 Six Nations without Farrell or George? Let us know in the comments section.

The 77-cap international was left out of Jones' autumn plans despite his form leading Leicester to the Premiership summit this season, making him an obvious candidate to come in from the cold if a fly-half is needed.

George, 31, was initially left out of England's autumn squad but earned a recall following injury to Luke Cowan-Dickie having displayed superb form at club level in recent weeks.

And he told the Evening Standard that while the "timing couldn't have been worse" given his resurgence, he's eager to use the Six Nations as a motivator to get back to his best.

“The injury sounds grim but I don’t need an operation and am hoping to be back in ten weeks,” he said. “The Six Nations is a carrot I can work towards when things are tough in the coming weeks.”

With little international rugby to be played in the next two months, it's Saracens who will feel the brunt of these absences, especially with their European Challenge Cup campaign set to start in December.

The five-time Premiership champions will begin their pool-stage campaign against Edinburgh on December 11 before travelling to French club Pau one week later.

Mark McCall's men are then due to host London Irish in the continental competition on January 23, which looks as though it may still come too soon for Farrell or George.

Alex Lozowski, Alex Goode and Manu Vunipola will provide fly-half cover for Farrell in the months to come, while McCall will lean on the likes of Tom Woolstencroft and Ethan Lewis while George is sidelined.

For England, meanwhile, Saturday's clash with world champions South Africa now presents an invaluable chance to test tactics, which may be required all the more when the Six Nations swings around.

November 18, 2021 Rugby Union Comments Off on England’s Owen Farrell and Jamie George ‘out until the New Year’
NFL News