England coach Eddie Jones has once again adopted a siege mentality ahead of his team’s tour of Australia by warning the visitors can expect to be confronted by “abusive” Australian crowds in an “aggressive environment”.

It comes as the former Wallabies coach suggested he deliberately made up a story during the last tour of 2016 about being inconvenienced on arrival in Australia.

Jones announced his 36-man squad on Monday for the three-Test tour that begins on July 2 in Perth.

England have completely dominated the Wallabies recently, winning their last eight matches since the first Test of a captivating 2016 series that Australia lost 3-0 less than eight months after reaching a World Cup final.

Before that series, Jones declared his team would play “Bodyline rugby”, in a reference to the controversial tactics employed by Douglas Jardine’s England side on their 1932-33 cricket tour to Australia.

“We can’t do what’s been done for previous English teams, we’ve got to have a different mindset,” said Jones before that tour. 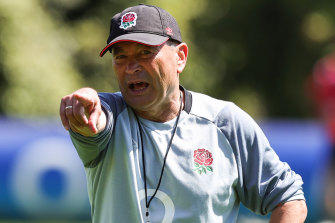 Eddie Jones yells instructions at his players during an England training session.Credit:Getty

Given the mentality worked six years ago, Jones’ comments overnight suggest the Australian-born coach will once again paint his home country as the enemy.

“For the squad to go to Australia, it is completely different conditions,” Jones said. “Really hard, flat tracks and abusive crowds. They are in-the-face, the Australians.

“The media are going to be in our face. They are aggressive. It is a really aggressive environment. You can learn so much about your players and your squad on those tours. 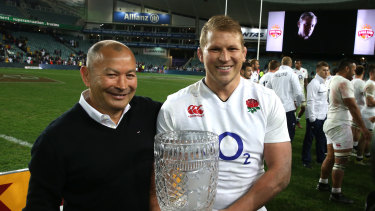 Jones and Dylan Hartley holding the Cook Cup after a third win in Sydney in 2016.Credit:Getty

Asked about the Bodyline reference and whether there was going to be more of the same rhetoric this time around, Jones replied: “We’ll wait and see. We’ve got to go after them. We’ve got a whole intention of going after them. Davie Rennie’s sides traditionally want to play on the front foot, so it’s gonna be who wins the front foot.”

When England arrived in 2016, Jones complained about his treatment on arrival in Brisbane.

“I just went through immigration and I got shunted through the area where everything got checked,” Jones said. “That’s what I’m expecting.

“Everything that’s done around the game is going to be coordinated, all coordinated to help Australia win.”

However, when Jones was asked whether he was expecting anything similar at the airport when the team lands in Perth this week, he suggested he may have been economical with the truth.

“I’m sure we can make something up again,” Jones said.

In a charm offensive, Jones also praised the Australian team and said they would put up a good fight.

“You can’t think of a better experience with the blend of some really good senior players coming back to their best and some young guys coming through,” Jones said.

“What more could you ask for against a good Australian team?

“They’re a good team. Their Super Rugby sides have been doing better. They’re packed full of Brumbies, which is my old club, so there’s some nice stories out there.”

Watch every match of the July Test Series on the Home of Rugby, Stan Sport. Kicks off Saturday, July 2 with Wallabies v England, New Zealand v Ireland, South Africa v Wales and Argentina v Scotland. All streaming ad-free, live and on demand only on Stan Sport.