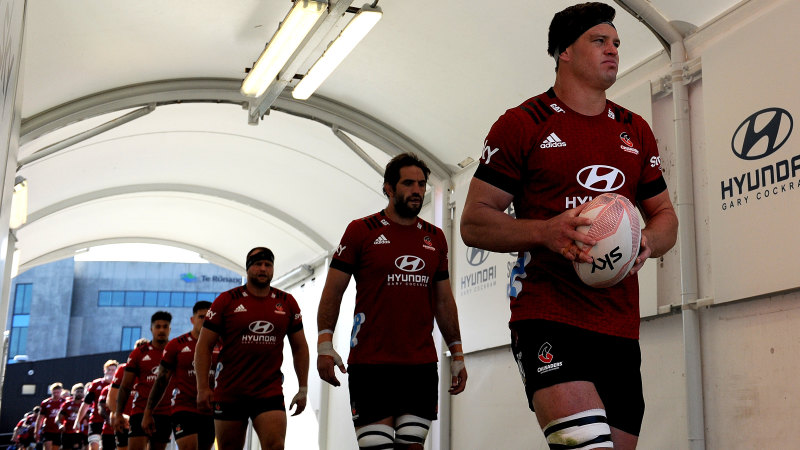 Now that all teams have had at least one game in Super Rugby AU and Super Rugby Aotearoa, it’s a good time to start the SMH’s trans-Tasman power rankings, which will be updated each week. Results play a part, of course, but we will also assess the quality of rugby across both competitions and take that into consideration. The Crusaders top the first rankings but 100 per cent starts for the Brumbies and Reds put them in the top five. 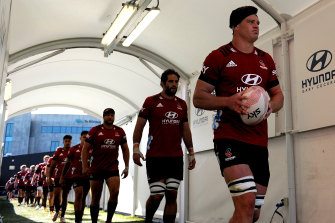 Scott Barrett leads the Crusaders out on Sunday. The perennial Super Rugby powerhouses have picked up in 2021 where they left off last year.Credit:Getty

The Brumbies have started the season well but the Crusaders have already shown they are on a different level in this part of the world. Their All Blacks-strength tight five has crunched the Highlanders and Hurricanes in successive weeks to set up the sort of ball that No. 10 Richie Mo’unga thrives on. Reds fans will query why we have them behind the Blues, but the Kiwi competition remains the benchmark. With the trans-Tasman competition still mired in uncertainty, this might be as close as we get to a ladder this year.

2. The Waratahs were better – but they still could go winless this year

The Western Force’s two tries were terrific. It was impressive to see the manipulation of the defence in the opener, pulling the Waratahs to the edge and then coming back to the centre of the field again. All that work created the spacing issue that the Force exploited when Tim Anstee exploded through a gap and found the equally impressive Fergus Lee-Warner. And the second – a lineout play – is something we’ll see more of this year because across both Super Rugby AU and Aotearoa lineout drive defence has gone up a notch. 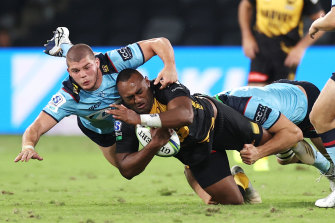 Carlo Tizzano has been a rare bright point for the Waratahs in their winless start to the Super Rugby AU season.Credit:Getty

It is putting an enormous pressure on their defensive line to soak up pressure. Tizzano was outstanding against the Force, just relishing that workload and hammering into people again and again. He’s about as damaging as you could expect of a 21-year-old and a lot of the improvement the NSW board saw on Friday was likely due to his appetite to keep hitting people.

Backing that up will be the hard part because a lack of front-row depth means the Waratahs have a platform other sides know they can target.

The men from Canberra might have been reading too much of their own press this week – and we are guilty as anyone of pumping them up. They were sloppy. It’s often said defence indicates attitude, but you can go a step further back than that: restarts. The Brumbies were poor receiving possession – it seemed like everyone was waiting on someone else to take responsibility.

5 Trevor Hosea (Rebels): Player of the round

As a result, they were indebted a big shift from Scott Sio. Not at his best last year, the veteran loosehead looked re-energised in Canberra, strong at the set piece and carrying hard well into his 66 minutes on the paddock.

Rebels No.1 Cabous Eloff enhanced his cult hero status with some big charges, but Sio was king of the dirty work.

5. Did the Rebels get enough advantage from the red card?

The modified red card rule is a good piece of thinking, particularly for incidents such as Allan Alaalatoa’s shot on Pone Fa’amausili on Saturday. It was a mistimed hit but not the sort of thuggery that merits a 15 v 14 contest for the rest of the game.

Yet, the way the game unfolded made you wonder if the Rebels got enough from it. They lost Fa’amausili for the game, lost the scoreboard 8-7 during the 20 minutes that the Brumbies were down to 14 men, and still were under pressure at scrum time. In fact, you wonder if a lack of set-piece confidence stopped them going for a scrum from a perfect position after 68 minutes when Brumbies wing Andy Muirhead was sent to the bin. Instead, they took the three points – and that wasn’t enough.

Does the rule need to be tweaked to be weighted more in favour of the side with 15 men?