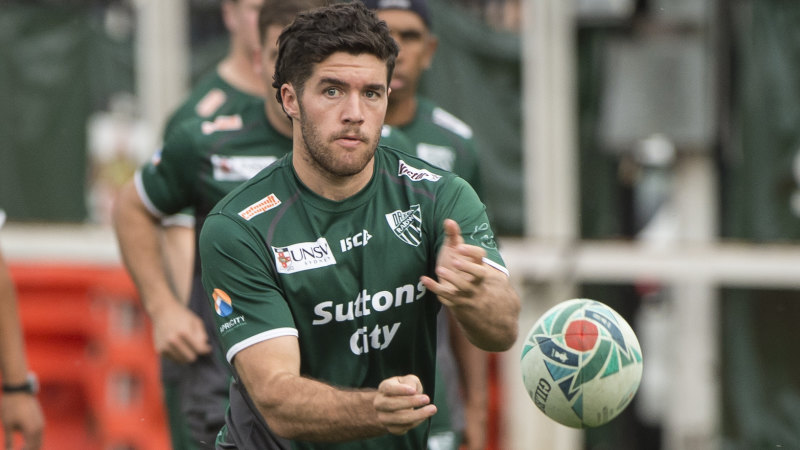 Waratahs co-coach Chris Whitaker has backed new starting five-eighth Ben Donaldson to step up for NSW against the Western Force this weekend but refused to be drawn into a slanging match with Eastwood coach Ben Batger, who was angered by the decision to overlook Tane Edmed for the No.10 jersey.

Following an injury to regular pivot Will Harrison, the Herald revealed on Wednesday that Edmed, a regular bench player this season, had missed out on being promoted for Saturday’s round nine clash in Perth. 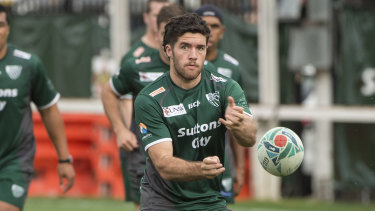 Ben Donaldson during a training session with Randwick. Credit:Wolter Peeters

The news prompted Batger to launch a tirade at the current NSW coaching staff.

The former Waratahs and Brumbies player said it was “crazy” to pick Donaldson; a Randwick and Junior Wallabies product who came off the bench a number of times last year for the Waratahs and is highly rated by astute judges.

Batger argued Edmed had done a full pre-season, had been playing well off the bench and had earned his stripes in the Shute Shield, having led Eastwood to a grand final last year, to go with the fact Donaldson has been battling a quad injury this year.

“It’s a real bitter pill for me to swallow as his coach. What does he have to do to get the starting jersey?” Batger said. “The Waratahs dig their own grave sometimes. They’ve only got themselves to blame for certain things.”

Asked about Batger’s comments, which were the talk of Sydney club rugby on Thursday, Whitaker was diplomatic.

“I’m not going to play it out in the paper,” Whitaker told the Herald. “You’re always going to get those critics. Ben is looking after the player he coaches at Eastwood. We 100 per cent support Shute Shield and that’s why we try and release our players as much as we can.”

The criticism of Donaldson, however, did not go down well at Randwick. Club figures the Herald spoke to were angered by Batger’s remarks about the 22-year-old but did not want to hit back publicly.

The comments have certainly caused a stir in the Waratahs’ inner sanctum too and could be a distraction heading into the match.

It is understood multiple clubs have been in contact with Eastwood to lend their support to Batger, who wanted to make the point that Waratahs players need to spend more time honing their craft in the Shute Shield.

Adding further intrigue is the fact the Waratahs asked Eastwood and Randwick to start Edmed and Donaldson in last weekend’s opening round of club rugby.

While Donaldson steered Randwick to victory, Batger opted against picking Edmed in his starting XV against the Western Sydney Two Blues.

It is understood Batger didn’t want to ruin the starting team’s cohesion, knowing Eastwood have two big games coming up against Southern Districts and Sydney University.

The Waratahs wanted Edmed to get maximum minutes and are privately frustrated that Batger put his club’s interests first.

Whitaker denied the decision had anything to do with Donaldson’s selection.

“There’s not much between the two of them,” Whitaker said. “I just thought in that game Donno looked quite relaxed and calm. It was probably tough on Tane because he came on against Parramatta when the game was already won.

“We know what both of them can do and offer. We get to work with these guys every day. We just thought for this game against the Force that we want to start with Donno.

“Ben has trained really well, he’s had a really good week. He’s been back training with us for three or four weeks now [after his quad injury]. We’ve kept a close eye on him, he’s doing lots of skill work. We’ve got all the confidence in the world in them. They’re both going to play a part in this game. There is no doubt about that.

“This is Donno’s second year. He played 50 minutes against the Reds last year. We’ve picked the best team we can pick that we think can beat the Force.”

Asked about the difference in styles, Whitaker said Donaldson had a bit of Stephen Larkham about him.

“Donno is more of a classical [No.10], almost like a Stephen Larkham kind of stay square player,” Whitaker said. “Tane is 20 and still learning. He’s got the ability to run and take the line on but also he’s still working on the basics of five-eighth play.”

Whitaker didn’t want to be drawn on Batger’s claim there was a Randwick bias at the Waratahs, however did note Eastern Suburbs had the greatest representation of players in the team for this upcoming match.

In team news, Hugh Sinclair shifts to the second row to accommodate Lachlan Swinton who is returning from injury. The Waratahs have opted for an extra forward on their bench, with Charlie Gamble coming into the 23.

The Waratahs have lost all six games this season but Whitaker said there was confidence in the group after a narrow loss to the Brumbies in the wake of coach Rob Penney’s sacking.

“When you get the news your head coach has been let go, it’s natural the boys bounce back from that,” Whitaker said. “Now the challenge is we’ve got to do it again.”