Former Wallaby Drew Mitchell believes the RFU’s decision to ban tackles above the waist for lower tier competitions is over the top as Rugby Australia confirmed it had no plans to adopt the radical move.

The Rugby Football Union – the governing body of English rugby – has announced plans to lower the legal tackle height to the waist in third level competitions, right down to the amateur game.

An RA spokesperson said the governing body was “monitoring” the situation but confirmed “specific discussions about implementing this measure” had not taken place in Australia.

“We are naturally the beneficiary of a huge amount of research undertaken by World Rugby and we work with them and other national unions on maximising player welfare at all levels,” an RA spokesperson told the Herald. “Our key focus for 2023 remains on correct tackle technique – which is critical to player safety – and we will continue to drive this priority with all coaches in 2023.”

Mitchell, Australia’s leading try-scorer at Rugby World Cups, criticised the rule, saying it was an over-reaction and did not eliminate the risk of getting hurt. 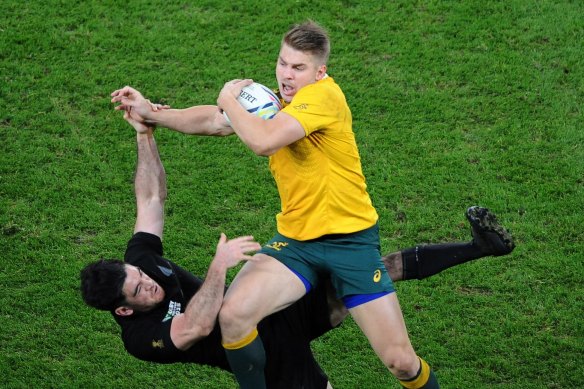 “I think it’s a little bit dramatic,” Mitchell said. “A few years ago the nipple height was introduced and quickly thrown out. I get what they’re trying to do … but I think this one is wide of the mark and going too far.

“I’m not going to sit there and say you’re at more risk or the same but there’s definitely an element of risk there. From my experience, I know going low [in a tackle] there is always the risk of getting a knee or shin to the head. I don’t think it’s going to be the silver bullet they’re looking for.

“I would implore Rugby Australia to sit and watch from afar. I’m pretty sure it’ll get to a point where we won’t have to make a decision because it would get thrown out pretty quickly.

“There’s got to be flow-on effects, too. If you can’t tackle anyone above the waist and every single attacking player has hands free during every single run [that changes the game]. Whilst trying to eliminate one thing, we open up something else.”

Farrell, the former rugby England international, said he couldn’t see the logic behind the RFU’s decision.

“I think it’s super important that what has to come with [the new laws] is the correct coaching, the correct technique,” Farrell told reporters at the launch of the Six Nations, which begins early next month.

“If you are ever just saying to a kid that ‘you need to tackle lower’, then you become even more vulnerable. If you’re just sitting there with your arms in front, trying to wrap, with your head down etc you’re a sitting duck. [It’s an accident] waiting to happen.”

Sexton, who has suffered his fair share of concussions, added: “Look, I don’t agree with it. There’s no point sitting on the fence really, is there? I just think you have tall people who play the game. It should be their decision how they tackle.”

Former England hooker and British and Ireland Lions representative Brian Moore disagreed in a column for the London Telegraph, saying that more people needed to jump on board with the concept.

“Those people saying ‘I’m all for safety but…’ are really not all for safety,” Moore wrote. “You should try explaining that ‘rugby is a man’s game’ to parents – see how that goes down at the school gate.

“How about we stop portending disasters and try to make this work? It will require time, patience and probably revisions before it works as it has been shown it can. To players, I say it is your health and your careers that are at stake. For your own and your colleagues’ sake, buy into this.”

Watch all the action from the Six Nations with every match streaming ad-free, live and exclusive on Stan Sport from February 5.